September 24, 2017
(I attended the Paul McCartney concert last night. I won't say it was life-changing, but seeing 35,000-plus people of all ages respond in unison to a 75-year-old playing songs for 3 hours with joy and enthusiasm makes you check your priorities: Life is not about what side you're on. Time for Cardboard Appreciation. This is the 263rd in a series): 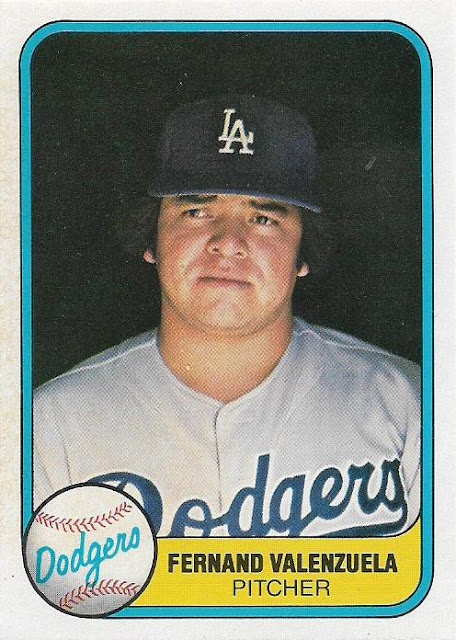 Every year at this time there is conversation about what baseball should do with September call-ups.

I personally don't have an issue with the call-up ritual and can't remember others having an issue with it until the last five years or so. Like many of these "we have to make this fair" topics that now dominate social media, I'm sure some changes will be made. My only hope is that September call-ups will still be a thing to some degree.

Call-ups add an element of excitement to your team's season, whether that team is in the playoff chase or not. If your team is way out of it, you now have a reason to pay attention. And if your team is still contending, well, that call-up could potentially make a name for himself in those few opportunities he has before the season ends.

The most notable September call-up of my lifetime by the Dodgers is Fernando Valenzuela.

He was brought up to L.A. and played his first major league game on Sept. 15, 1980 at age 19. It was in a 9-0 loss against the Braves in Atlanta. Starter Burt Hooton had lasted only two innings, giving up five runs. Valenzuela came in for his debut to start the seventh. He permitted just one hit over two innings. He allowed two runs but they were unearned thanks to errors by Ron Cey (oops) and Derrel Thomas. 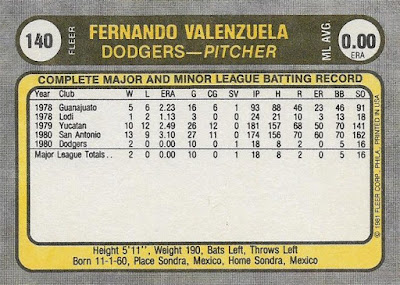 Not once did he allow an earned run.

On Sept. 19 against the Reds, he took the mound in the fourth inning and retired Dave Concepcion, George Foster and Johnny Bench in order, striking out Bench. He struck out four in three innings.

The appearances grew progressively better. By the time the Dodgers entered  a one-game playoff with the Astros to decided the NL West title, there was debate over whether Valenzuela should get his first start over the underperforming Dave Goltz. I wanted Valenzuela.

Goltz started. The Dodgers lost. By the time Valenzuela was brought in to pitch two innings of shutout ball, it was too late.

That was Fernando before Fernandomania. And because I was in on the sensation before it ever really started, I've accumulated a decent share of Valenzuela baseball cards. Today, I decided to see which Dodger Valenzuelas I could add to my collection through a quick online shopping tour.

It turns out I need a fair amount still.

That's exciting to me.

So I've made a few September call-ups of my own. I'll be adding these cards to my rotation and I expect them to be instant sensations.

Although there's only one Fernand Valenzuela card.

DMA said…
I remember watching him shut out the Phillies once. Looking at baseball-reference.com, I think it must have been in 1983, so it was well after the start of Fernandomania. I was just a kid, though, and I didn't know much about him before that. It was a dominating performance that I've never forgotten -- and the Phillies were good that year, too, winning the NL.
September 24, 2017 at 8:48 PM

Fuji said…
After I started getting anxiety attacks a few years ago (triggered by claustrophobia), I've pretty much avoided concerts. But getting to see McCartney in concert might be worth the risk.

Billy Kingsley said…
Fun (?) fact...the stage almost burned down at that concert. The pyrotechnics went wrong. Most in attendance thought it was part of the act...it wasn't. my mom has been lifelong friends with a now retired fire chief who was there also and apparently took part in preventing it from turning bad. He posted about it on Facebook and she told me about it. Don't know how close you were to the stage but you might have even seen it.
September 25, 2017 at 4:13 AM

GCA said…
I was thinking that was the variation I just got recently, but it's the '82 Fleer, which is even better 'cuz it shows him in mid windup with his signature glance to the heavens.
September 25, 2017 at 1:33 PM

arpsmith said…
I too am a fan of September call ups. I get the counter that the rosters are so big that the game is played different but I think the positives with introducing new players to the majors far outweighs any downside.

Henry Blanchette said…
I love the new homepage design and the header at the top especially the Dodgers cards you chose.
September 25, 2017 at 5:43 PM