I need to get my butt back to a card aisle 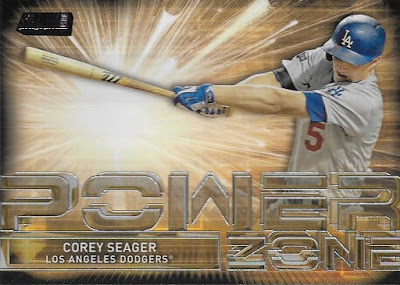 This week I've been the poor sap filling in for someone on vacation.

"I'm on vacation!" they scream on the social media forum of their choice. And everyone responds with a like or a heart or a hashtag and they all feel good that someone out there has beaten this oppressive system that we've constructed for ourselves if only for a brief period of time.

Except for the poor sap. There are no likes or hashtags from them. He or she simply plods forward, in real life, bearing more of the burden than normal, if only for a brief period of time.

Fortunately, the vacationer returns today and things can revert back to normal (until I go on vacation). It's just in time, too, because yesterday I was so drained that I actually thought "I really need to get my butt back to a card aisle."

Under normal circumstances this year, I wouldn't consider heading to the card aisle even after a few weeks away. The product available has been sporadic since March, regardless of the big box store. Meanwhile, this time of year produces sets that don't appeal to me much.

Still, when you're at your work desk, staring at the computer or wall, sneaking a look at the blogs on your phone, even those Heritage High Numbers on that '68 design look mighty good. I believe five or six bloggers have opened that stuff with mediocre enthusiasm, but just about all of them -- all non-Dodger fans I might add -- have been able to say, "at least I got a Cody Bellinger."

All right, that's it. I'm getting to the card aisle.

I have a rare Saturday-Sunday off. You can bet I'll be braving the weekend crowd (I loathe weekend department store crowds) to see what stupid stuff I can show you on my blog in the future.

I have cards from others to show!

Nick of the njwv blog sent me a couple of Stadium Club Corey Seagers recently. He's a Giants fan, so he doesn't appreciate Corey Seagers. That's a lot of screwed-up there, but I'm not complaining. All the Seagers for me!

One of the Seagers was at the top of the post. 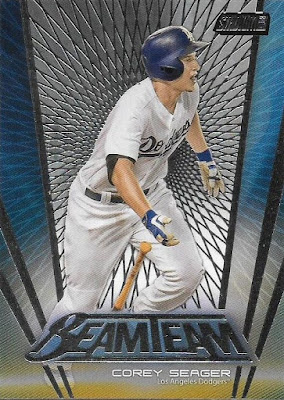 This Beam Team Seager was the other one.

No offense, especially to Nick, but these Beam Team inserts are looking worse every year. I fully expect stained glass windows when I hear "Beam Team" and I do realize that's not always what they've been. But nothing about this card to me says "beaming". 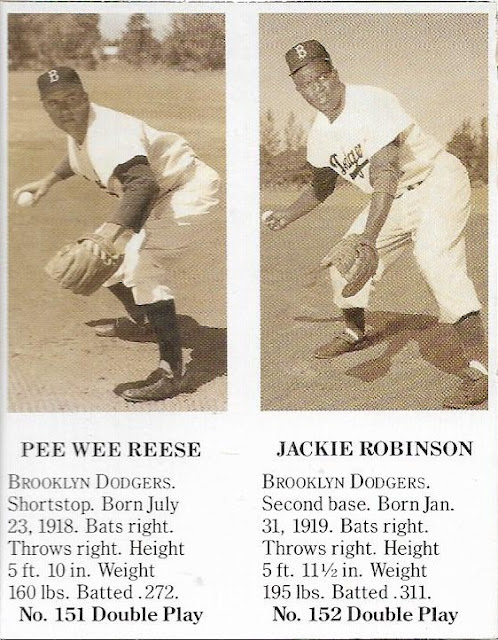 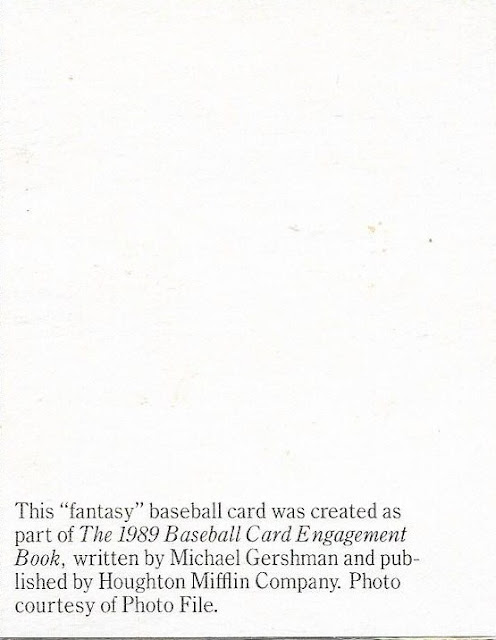 Nick also sent this "fantasy" baseball card that drew my eye right away because it was completely new to me.

The Baseball Card Engagement Book sounds like a lot of fun. I wouldn't mind owning a copy. 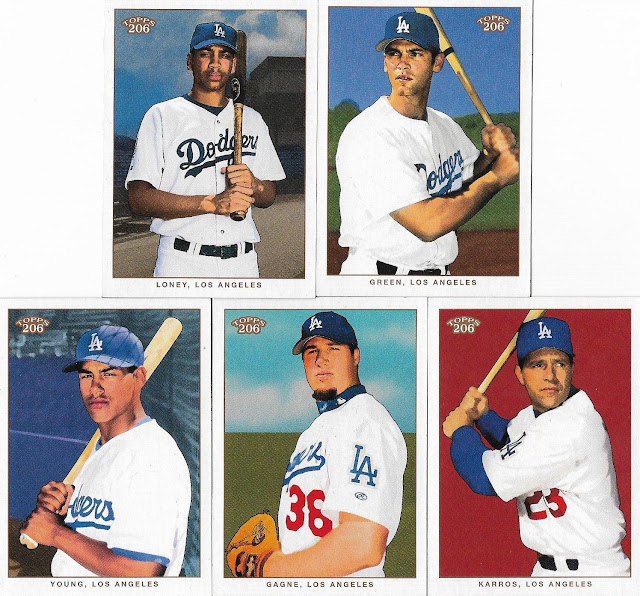 The next group of cards I'm showing are from Fred from way up north in Canada.

Fred took a peek at my half-done want list and determined that I needed the above 2002 T206 Dodgers. I believed him and I still do, even though 2002 is a great big muddle in terms of cards I need.

The typical 2002 T206 pose seems to require a great deal of squinting.

The other cards were off my 1984 Fleer want list. These are so much fun to get. The Dave Von Ohlen card is classic Fleer. 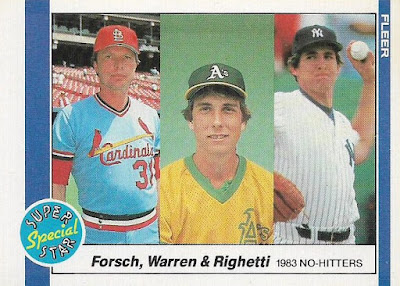 Another strangely Fleer Fleer card, featuring those who threw no-hitters in 1983. Fleer decided to make this a horizontal card but keep the Fleer logo where it was, so that it is sideways. This could have easily been a vertical card with a bit of cropping.

The Mike Warren no-hitter was pitched against the White Sox 34 years ago today. 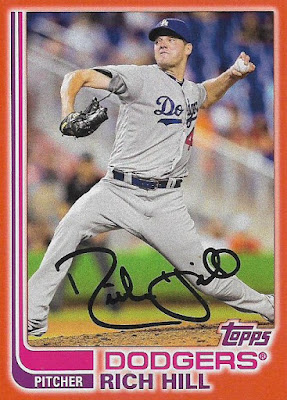 Finally, let's see some cards from Chris of Nachos Grande.

I pounced on this "soft red" parallel of Rich Hill from this year's Archives set. "Soft red" sounds like a lipstick color to me. I worked at CVS just out of college and among my monotonous jobs was stocking makeup stuff (which was a lot better than stocking tobacco stuff at 9 in the morning. I started to get woozy). I'd pull out the lipsticks and wonder whose job it was to come up with lipstick colors and how much it paid.

Now I wonder whose job it is to come up with baseball card parallel colors and how much it pays. 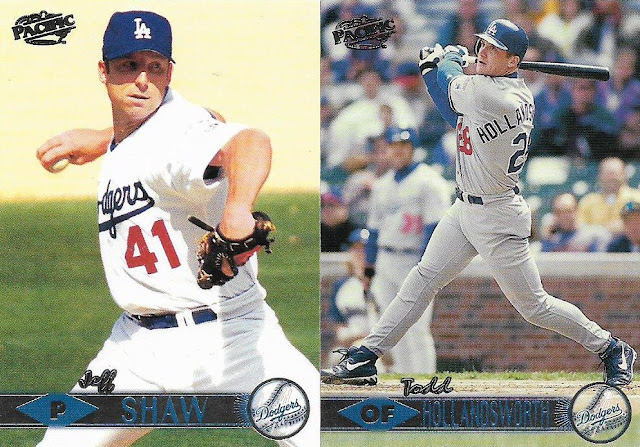 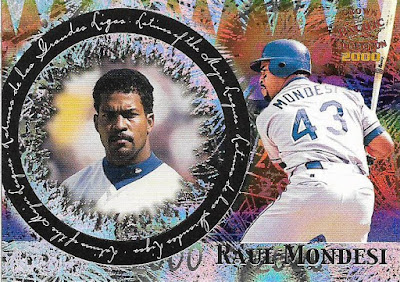 The above cards are all needs, so go Pacific!

I hope you each enjoy your weekend. For once I will be joining you in your two days of freedom.

Stay away from Target and Walmart though.

At least until after I'm gone. I'll alert you.

Fuji said…
I didn't think there was a regular issue base card from the 80's that I hadn't seen, but I don't ever recall seeing that 84F no hitters card. Crazy thing is I busted packs of that stuff years ago and have seen my fair share of that product sitting in dime boxes and at the card shops I've worked at. I even have a complete set I picked up years ago. Maybe it's because it's 11:25 on a Friday night after a long week... but my mind is officially blown.
September 30, 2017 at 2:25 AM

Kevin said…
I still need cody bellinger for the topps base set, one of 15 cards i need to complete series one...anybody want to trade an aaron judge for it since i have about four of those?
September 30, 2017 at 9:32 AM