Before the strike there was the trade 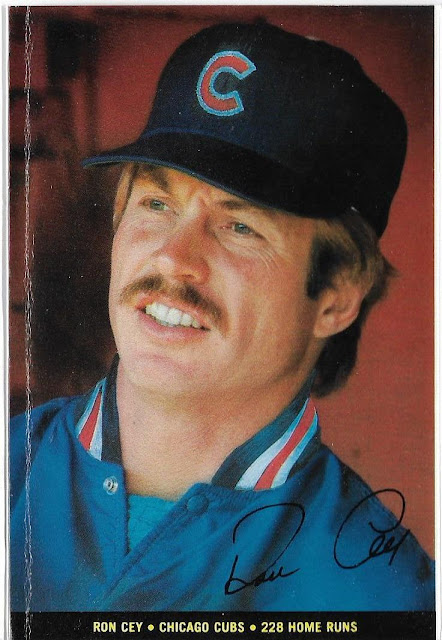 I came upon a realization, which may have been long overdue, when I viewed this Ron Cey portion of a 1983 Topps Foldout sent to me by Mark Hoyle:

Perhaps my gradual separation from the hobby during the mid-1980s didn't have to do with starting college and moving away. Perhaps it was a subconscious response to the Dodgers trading Ron Cey to the Cubs after the 1982 season.

Although I put my best face on it -- Greg Brock and Mike Marshall are going to be stars! -- the loss of my all-time favorite player caused a great deal of pain. Cey, who had created long-awaited stability at the Dodgers' third base position, had been L.A.'s third baseman and No. 3-through-5 in the order for as long as I had been a baseball fan. I thought his contributions and playing a key part in the Dodgers' World Series title in 1981 would have kept him with the team forever.

Trading him away made me angry. Trading him for two players I had never heard of -- Vance Lovelace and Dan Cataline, who would achieve little in the major leagues -- made me embarrassed. This was a World Series MVP! All of those 228 home runs came with the Dodgers, bub!

So, while I told myself that I was getting too old for cards and didn't have time for them, it may have been something more. I collected in 1983, but not as enthusiastically. The Dodgers made the postseason in 1983, but I don't remember much about it, and recall only mild disappointment when they lost to the Phillies in the NLCS.

It just didn't matter. Ron Cey was a Cub. An airbrushed Cub. The world had stopped making sense.

In 1984 and 1985, I purchased the Topps set at the start of the year and barely looked through it -- trying to avoid Ron Cey Cubs cards, no doubt. In 1986 and 1987, I bought a smattering of packs. Cey cards just didn't matter anymore. No cards really mattered.

Campus activities surrounded me. Clubs, bars, girls, odd jobs. I was too busy. Or perhaps it was that Cey trade all along.

I will likely never lose my Dodger fandom. But I believe it was tested more than it ever had been with the trade. 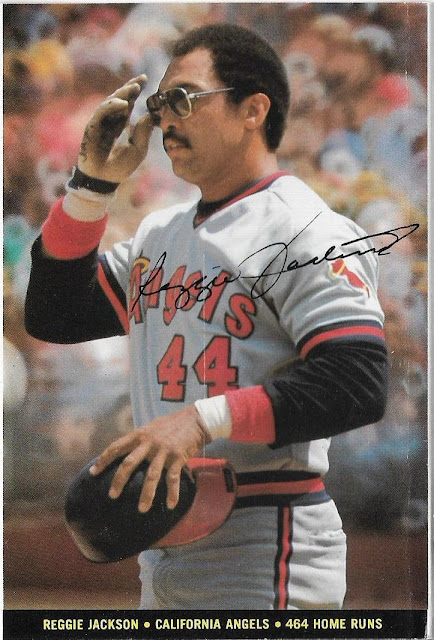 The reverse side of the Cey photo contains Reggie Jackson, in full "I Must Kill The Queen" mode.

I never came across the 1983 Foldouts that year ( likely because of my diminished collecting brought on by the Ron Cey trade).

I'm sure I would have been puzzled by them. A series a pictures strung together with photos on both sides. That didn't really jibe with my concept of cards: photo on the front, stats on the back.

And folding the pictures so they were all connected? I like what Mark Hoyle did with them. He split them up and then divided the now oversized cards to those who collected specific teams. 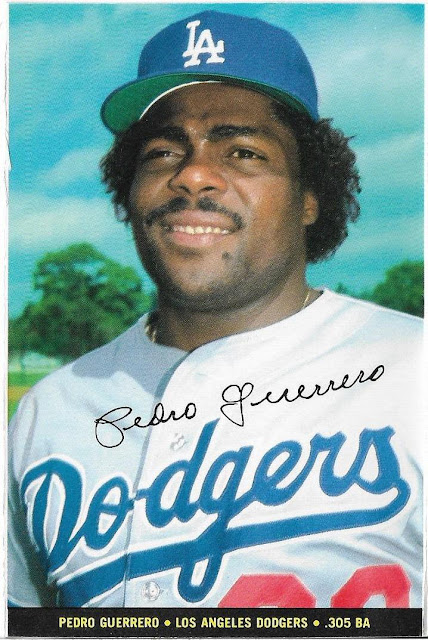 This Foldout section is now a Pedro Guerrero card. 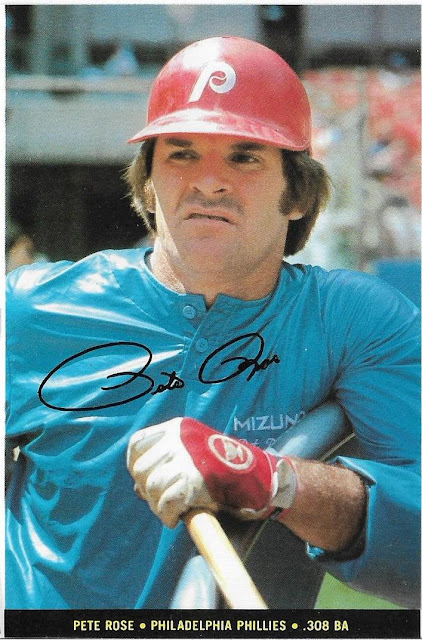 With a sneering Pete Rose on the back. 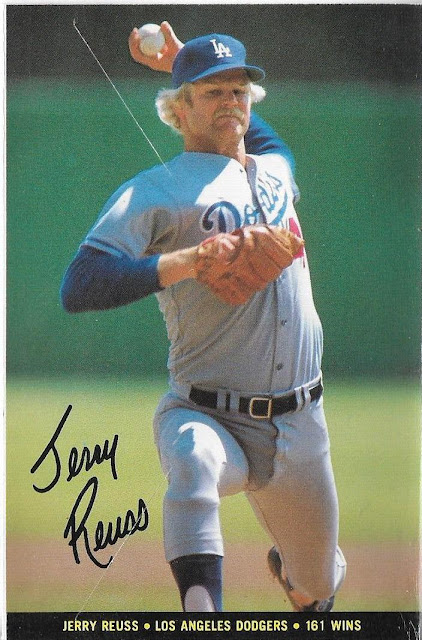 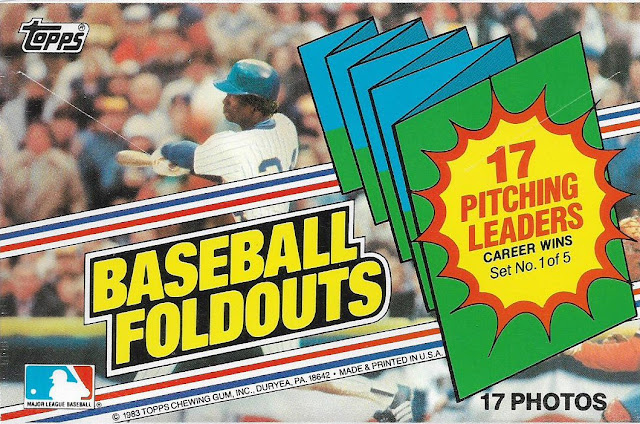 Features the cover panel to one of the five Foldout "sets".

This was a test issue for Topps and the five separate sets featured Pitching Leaders, Home Run Leaders, Batting Leaders, Relief Aces and Stolen Base Leaders. Each Foldout contained 17 pictures. 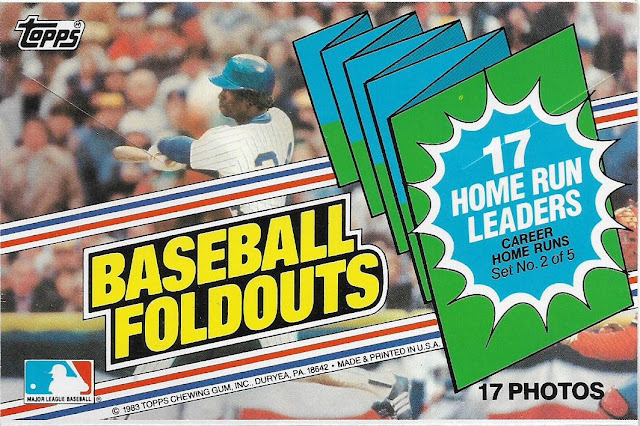 This cover panel, also sent to me by Mark, kicks off the Home Run Leaders panel. 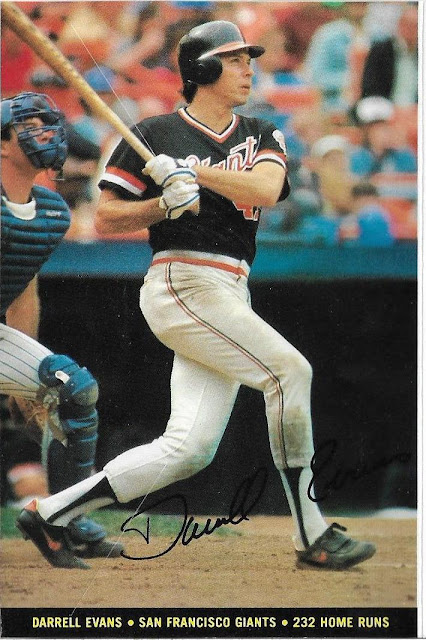 The reverse contains Darrell Evans. So now Mark is sending me Giants. Lovely.


Since this set is now on my radar, I automatically wonder what other Dodgers are featured. A quick scan indicates that there is only a Rick Monday Foldout to obtain.

This is a pretty odd set, I'm not sure why it was considered in the first place. But maybe it's just seeing Ron Cey as a Cub clouding my judgment.

Perhaps not so coincidentally, I returned to collecting full-time just as Cey's career ended. I would continue with my second stage of collecting until 1994.

I've always blamed my second departure from the hobby on two things, the strike and just too many sets being issued.

There's a whole generation of kids from the New York metropolitan area who became disillusioned with baseball, sports, cards, etc., plenty of which ended up wearing black clothes and listening to The Cure and Skinny Puppy because of the timing of it all, because the Yankees let Reggie go. Huge event that messed with a bunch of kids of my age. It is because of a different guy, and I don't think you busted out the eyeliner and such, but I think you experienced basically the same thing with Cey.

For my part, Mattingly, Rickey, Gooden and Strawberry drew me back to baseball (and Bernie Williams after them), but I ended up wearing the black clothing and listening to the music I did and still do anyway (and I always hated eyeliner even when I was being paid to wear it, really sensitive eyes).
September 26, 2017 at 7:59 PM

Unknown said…
That Reuss picture is awesome. This post reminds me of '82-'86, when my friends & I would trade cards and we'd have conversations and debates about how we thought certain players were definite HOFers. Guys like Cey & Garvey almost always came up in conversation.
September 26, 2017 at 8:06 PM

Unknown said…
That mid-80's period in NY was pretty awesome. I used to fall asleep at night listening to the Mets games. Strawberry & Gooden had soooo much potential. I was sooooooooo happy Ricky became a Yankee 'cause he was already my favorite player and now he was going to be on my TV all the time with Winfield & Mattingly.
September 26, 2017 at 8:10 PM

Mark Hoyle said…
The Monday is on the flip side of the Sorry about the Evans. Don't think I even looked at the back
September 26, 2017 at 8:21 PM

Brett Alan said…
You know, I also stopped collecting in college, and that was when my Mets were exactly that awesome team. Not sure what that means for Night Owl's theory...probably nothing, because he's not me.
September 26, 2017 at 8:25 PM

Once a Cub said…
Same thing for me with Ryne Sandberg's mid-season 1st retirement in the mid-90's. It also coincided with later high school years/girls/work etc. Made it through the strike, but the retirement stung.
September 27, 2017 at 3:42 PM