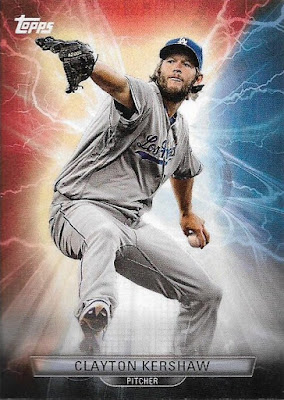 Somewhere in the 1990s, card companies started removing the backgrounds from cards and inserting alternate realities.

I admit, it took me awhile to adjust to not seeing fields and dirt and grass and trees on every one of my cards. And I'm still not crazy about a lot of the alternate looks behind the players.

But it's grown on me and sometimes it makes for interesting cards.

This is one such example.

I've gone on record that there needs to be more lightning on cards. I'm not fan of lightning in real life. It's freaky and I'm convinced that those people who go on the porch during a wild thunderstorm secretly want to be burned to a crisp. But lightning images sure make for pretty pictures. It's that "light up the night" effect that I have appreciated since I was a boy on everything from city lights to bedroom nightlights to those colorful bug-zappers in the summertime.

So when this card showed up on Cards On Cards, I stood up straight as if struck by lightning. What on earth was this and how can I get one?

I've learned since that it is part of a five-card set that is only available through an online purchase at Walmart. If you buy a 2017 Allen & Ginter or Stadium Club "bundle" -- which consists of a blaster box and a 12-card fat pack -- the lightning set is thrown in with your purchase.

Officially, I believe this is being called "Topps Walmart Online Exclusive," which is a name that's both vague and boring. But informally, people are calling it "Topps Electricity" and that is much more appropriate, descriptive and interesting.

The other cards in this set are Kris Bryant, Miguel Cabrera, Carlos Correa and Buster Posey. I have no interest in those other four.

The Kershaw, though, is mine, thanks to Cards On Cards. If I might say so, the card is striking. 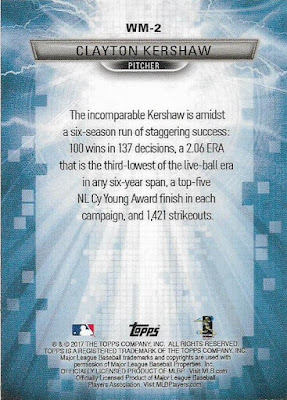 The lightning motif is continued on the back of the card. I like this card so much I'm going to ignore that the write-up uses the unnecessary word "amidst" (it's "amid").

Coming along for the ride with Electricity Kershaw was another Kershaw that I've had on my wish list. 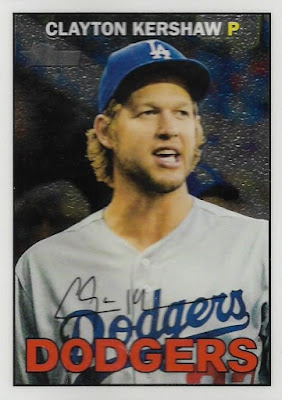 It's the simple Heritage Chrome card from last year. This was a pesky little sucker. 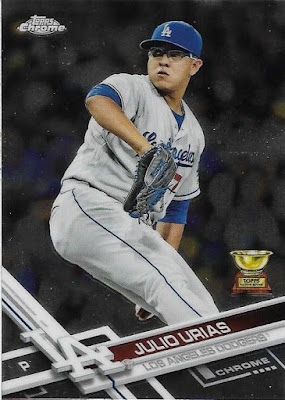 Here is a Topps Chrome card of Julio Urias featuring the rookie trophy that didn't show up on his flagship card. 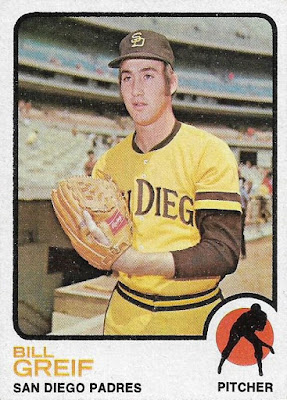 And, finally, a card that doesn't use any shiny effects -- no lightning nor chromium. All of the brightness is achieved by Bill Grief's golden uniform.

This card is off my 1973 Topps want list, a quest that has kind of hit the doldrums since I announced I was collecting it. But I'll get the fever again soon.

I guess it's hard to focus when there are cardboard lightning strikes going off.

Old Cards said…
The 1973 Bill Greif is the most interesting card in this post, because of the background. I get absolutely no charge out of the lighting cards.
September 17, 2017 at 8:12 PM

Zippy Zappy said…
*Feels deep shame that none of my card packages could ever make you feel electrified*
September 17, 2017 at 9:47 PM