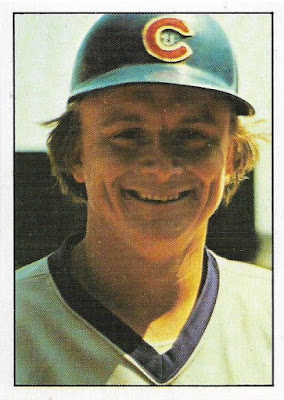 A couple of weeks ago I found some spare money that was just enough to order a few inexpensive cards off of my favorite baseball card marketplace.

It wasn't until I received the package in the mail a few days ago that I realized how many of the cards that I ordered were oddballs. I've always gravitated toward oddballs, but my main missions in collecting usually involve completing major sets. This package appears to signal some shift in my thinking.

I did order some mainstream cards, but they were by far the least interesting to me. Instead I found much more appeal in stuff like the 1976 SSPC Gene Hiser above. I ordered it because the Hiser in my SSPC set contains a rip through it.

So let's get the mainstream stuff out of the way so I can bore you all with my oddball interests. 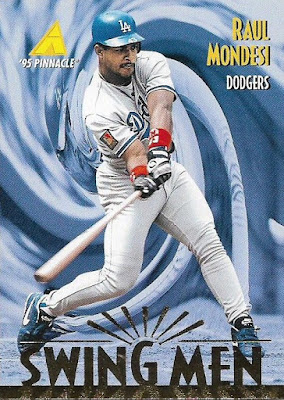 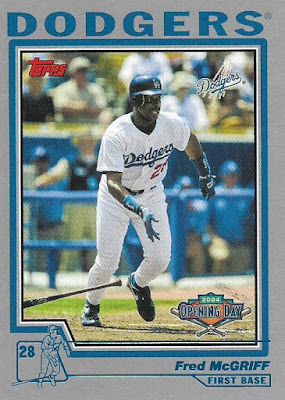 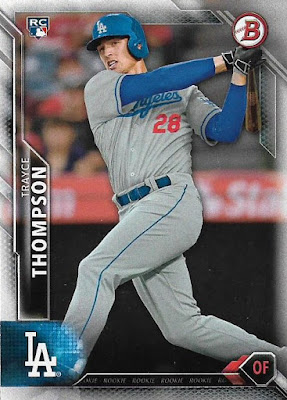 Cards off the Nebulous 9 list. Every last one sat on that list for a mystifying long time, although none more so than the Swing Man Mondesi. 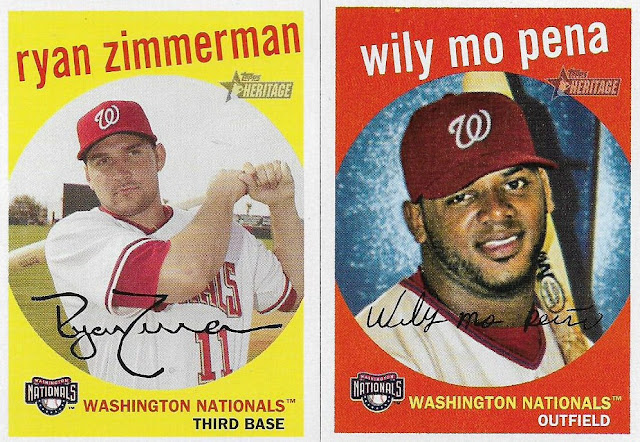 Here is a tepid response to my 10-year-old 2008 Heritage want list. I can't tell you the last time I bought cards for this set. So, two is better than nothing for years, I suppose. 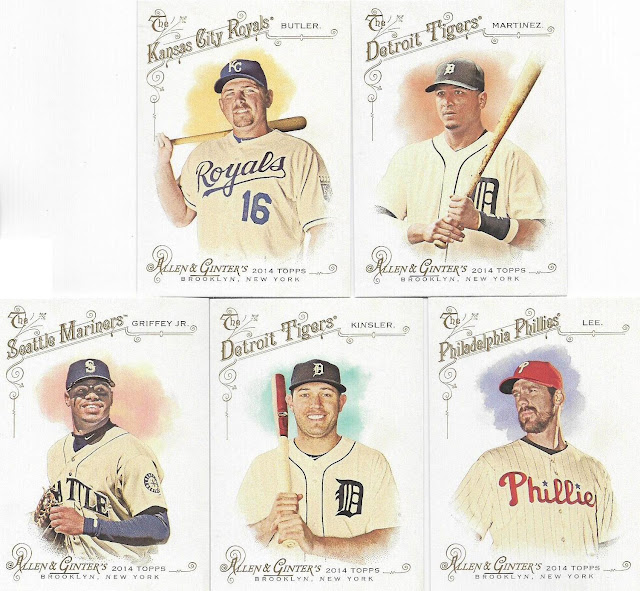 More weak completion action. Instead of finally trying to finish off my 2014 Allen & Ginter set by ordering the final nine cards, I ordered just five. Such enthusiasm.

But now that means the rest of the package is oddballs! Weirdos! Kookies! Misfits! Nutsos! Peculiars! Goofies! Zanies! 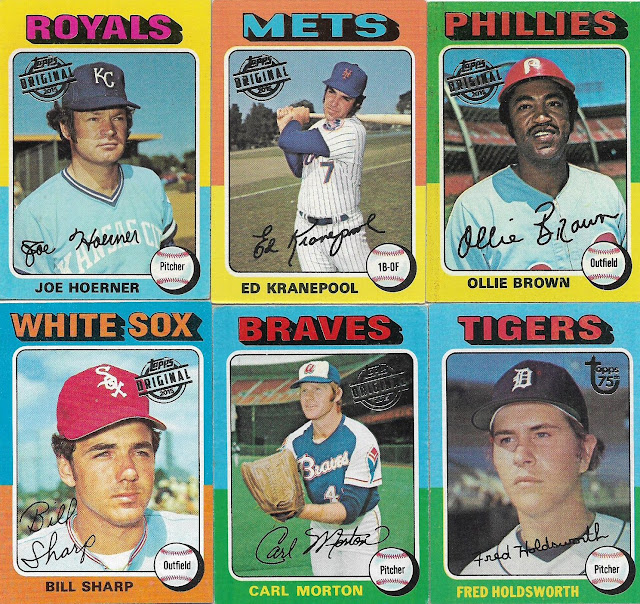 Here are cards that were once normal but have been converted to oddballs by the mere placement of a stamp.

The 1975 Topps buyback completion mission progresses at a slow and steady rate. These six bring me to 187 buybacks from the set. I believe I have one or two more orders of these buybacks ahead of me before I have to start doing some real digging. 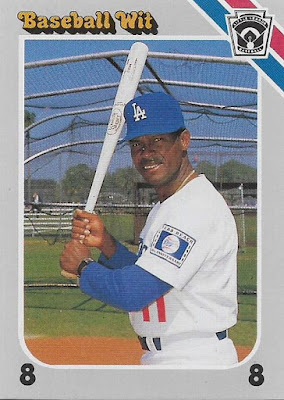 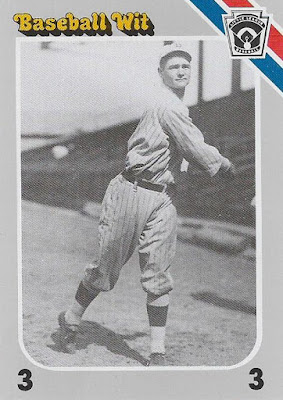 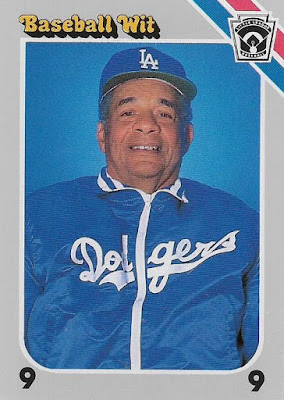 Three Dodgers from the 1990 Baseball Wit set. These cards paid homage to Little League baseball (the logo is in the top right corner of each card).

I had never owned any of these, which puzzles me for a card from 1990. They are exceedingly flimsly cards and the Zack Wheat card arrived with a disappointing crease through it (it's not visible here and it wasn't visible in COMC image).

I still need the Jackie Robinson Wit card, which I snubbed for this package because it was an image I've seen a hundred times. 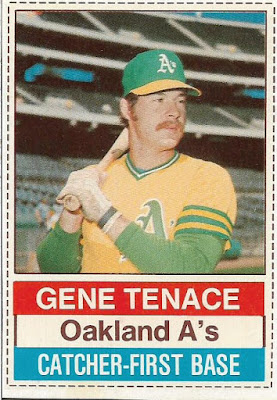 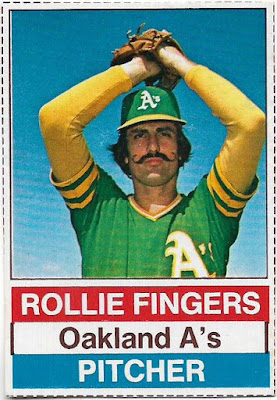 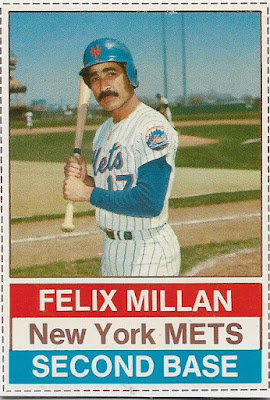 Three cards for the 1976 Hostess completion project. I went right for some big names from big teams of the mid-1970s. 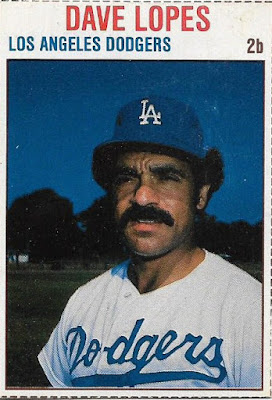 I also grabbed a Hostess card from three years later. This is the last 1979 Hostess Dodger card that I needed. It's a little surprising that I tracked this down long after the SP Ron Cey card in the same set. I don't think the Lopes card is an SP but it was elusive for a long time.

Here are all six of the '79 Dodgers together: 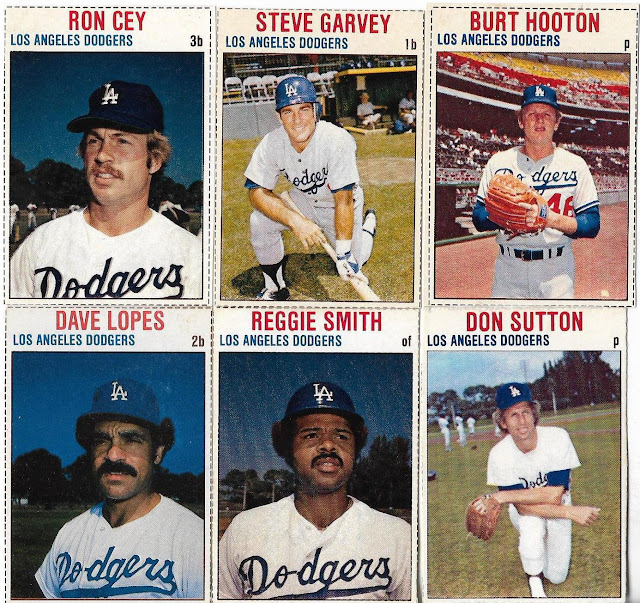 Some fine players and some fine cutting for the most part.

I ordered up only one card from Hostess' '70s oddball equal, the Kellogg's cards. But I can't show the card because it's on the Greatest 100 Cards of the '70s countdown. I'm very secretive about that list.

I'd like to order another card or two that is on that countdown list, but I don't know if I'll get to doing that in time. 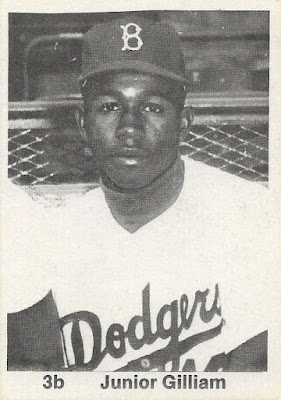 I'm confident this fascinates only me, but I am babbling about it regardless.

This is another one of the black-and-white versions of the 1975 TCMA All-Time Brooklyn/Los Angeles Dodgers set. The first purchase I ever made through a mail-order card catalog was this set, although it arrived all in purple. 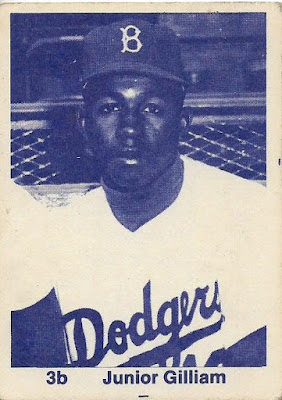 Since my jaw-dropping discovery, I've started cherry-picking black-and-white versions. The cards are fairly cheap (Jackie and Koufax are the usual sticklers) so there's no rush. 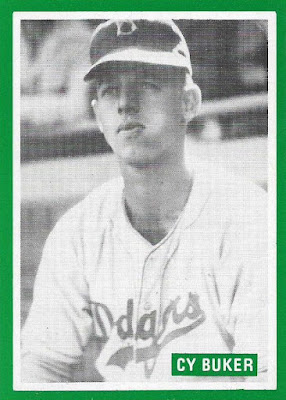 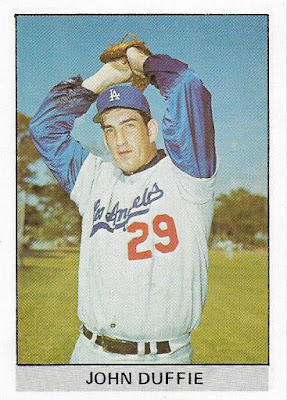 If you were a regular reader of Larry Fritsch's catalogs through the 1980s and 1990s you may know what these are.

A series of three sets were issued through the Fritsch catalogs called "One-Year Winners" (to my knowledge you can still order them from the Fritsch homestead). They featured cards of players who competed for only a year in the majors. This fascinated me even as a young teenager.

But it's taken me years to obtain any of the cards. Of course I jumped at a couple of Dodgers. Cy Buker was a World War II-era pitcher and John Duffie was a mid-1960s, 6-foot-7 giant. 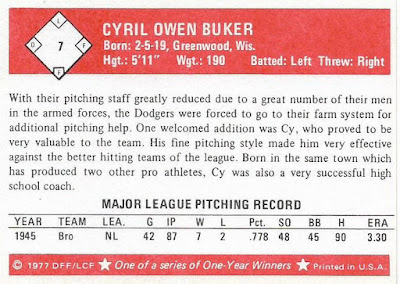 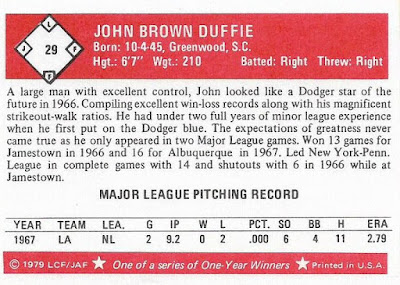 The card backs are very thorough and look like the TCMA backs from the same period.

There are still a couple of Dodgers I need to obtain -- the Roy Gleason in the set goes for a little more than average -- but for now I'm just happy I made a mark with this set after staring at it for so long in that catalog.

The final card that I'm showing amused me so much that I pulled a shoulder muscle ordering it. 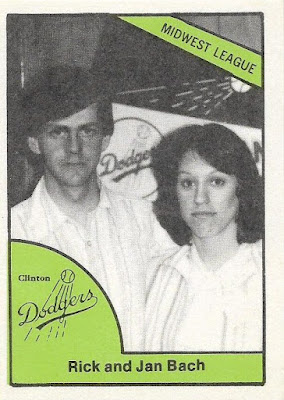 You didn't know the Carpenters ran a minor league team did you?

I love the minor league cards from the late 1970s and will grab all of the Dodgers someday. But for now it's one by one and the one that I pick is whatever grabs my fancy.

I don't know much about the people on this card. Rick Bach was the GM for the Clinton Dodgers for at least 1977 and 1978. I'm not sure what Jan's story is. 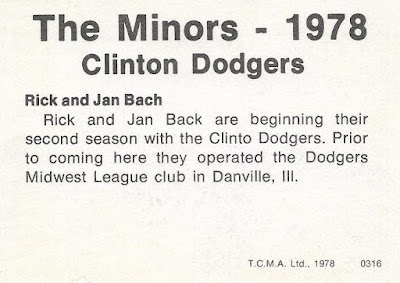 The back is filled with glorious typos (the Bachs are converted to "Backs" and the Dodgers are now from "Clinto"). Danville was a Class A Dodgers affilliate in the Midwest League in 1975 and 1976. I assume it was moved to Clinton, Iowa, as that was a Dodgers' Class A affiliate in the late 1970s.

So there you are.

Not a lot of stars in that package. Not a lot of rookies. Nothing fancy at all. Some downright commons and people who aren't even baseball players, for crying out loud.

Because these cards make my collection even better. And odder.

Tony Burbs said…
The One Year Winners sets have proven to be extremely helpful to my collection - I love those things!
September 22, 2017 at 10:21 PM

Hoarding Cardboard said…
Funny that both One Year Winners cards have guys from Greenwood...in different states.

Not sure how it worked, but the Clinton franchise is the oldest in the Midwest League, being in existence since the 1930s. So Danville wasn't the team that moved to Clinton. However, I'm not sure how the levels of minor league baseball worked back then.

Fuji said…
I've gotta give the obligatory nod to those sweet Hostess cards (especially the Fingers and Tenace)... but the real story is that Rick and Jan Bach card. Rick gives me the heebie-jeebies. His dead stare reminds me of a most wanted poster for an 80's serial killer.
September 23, 2017 at 10:09 AM