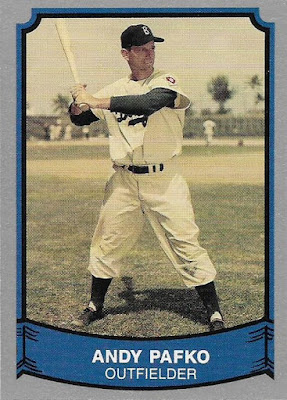 I'm not very good at dealing with painful or difficult incidents that are beyond my control.

If it's something that affects me directly I'm on it. I'll wrestle that hardship into submission. But I just can't handle the constant drumbeat of misery and affliction when all of it contains a caption at the bottom that reads YOU CAN'T DO ANYTHING ABOUT THIS.

The recent hurricanes are one example, although there is definitely a course of action I can take. Still I just can't look at pictures of destruction over and over.

I'm sure some of you know certain Facebook friends who wallow in distant misfortune. They dredge up some poor family 2,000 miles away, who they don't know, whose kid died in a tragic accident and proclaim isn't that so sad?

Yes, it's sad. It's sad every time it happens. What is your point?

I don't mean to come off as unfeeling, I just don't see the value in wallowing in stuff that is beyond your control. Focus on stuff you can fix. It'll make you feel better.

And that brings me to the Dodgers. Fans are in the terrible situation of having no control over anything that happens to their team. And given what I just said above, how in the world am I a fan?

Right now, after annihilating just about every team for three months, the Dodgers are in a streak as bad as I've ever seen. I'm going to call this "regressing to the mean," but I want it to stop. Immediately.

However, I have no control over that. And I see fans of the team wallowing in it. The beat writers for the Dodgers the past two weeks have been fielding constant bizarre questions and statements from fans on Twitter and I almost feel under siege from them. I can't take it anymore.

So I moved my list of Dodger tweeters off my screen. In its place, I moved the list of retro tweeters so I can see it at a glance. Goodbye "Dave Roberts is the worst manager in the world" and hello Qbert!

This is a familiar pattern of avoidance. I'm sure every fan has done it. During the famed 1985 NLCS when the Dodgers were surrendering the series to the Cardinals in as painful a fashion as possible, I turned off the TV so I wouldn't have to see anything more. I can't watch a game through my fingers.

When things get like this I even have a difficult time looking at cards of current players.

I recently received some cards from Adam of ARPSmith's Sportscard Obsession. Sadly, the cards of retired players I owned already. That means showing cards of players on a team that is doing very poorly right now.

Let's look at them quickly. Cover you eyes if you must, Dodger fans: 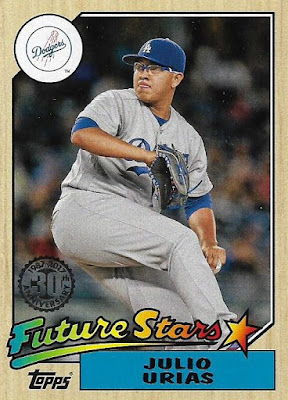 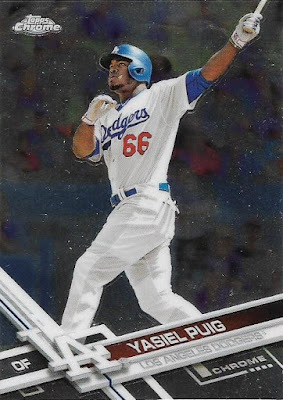 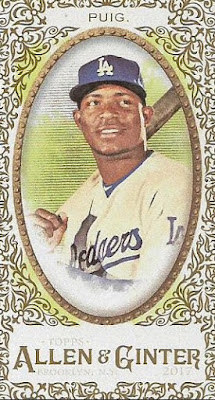 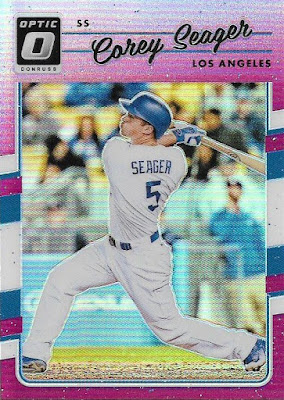 Phew! Are they gone?

You may open your eyes. I made it nice and brief for you.

Things could be worse, of course. The Dodgers could have had just a three-game lead when they started losing All The Games. Or, I could be Adam, a Giants fan.

He's had no control over a losing team all season.

That's a lot of avoidance.

Old Cards said…
Really like the Andy Pafko card. Thanks for posting. The Topps Chrome and the A&G card, now that's sad. These kind of cards are where I practice avoidance.
September 8, 2017 at 8:06 PM

steelehere said…
This current losing streak is driving me crazy as well. I feel like part of it is the Dodgers playing a lot of players that had nothing to do with their three month hot streak (I'm looking at you Adrian Gonzalez, Curtis Granderson and Andre Ethier).

More importantly, I'm hoping Corey Seager's elbow is OK. If not, I hope he can play first base for the playoffs with CT3 moving to shortstop and Cody moving to Centerfield.
September 8, 2017 at 9:37 PM

acrackedbat said…
I don't believe the Tigers played at all this year so I can't relate to the pain of a Dodgers losing streak. Oh wait. That's not avoidance, it's denial...
September 10, 2017 at 9:43 PM

GCA said…
God bless the bleeding hearts. You can't help everybody. Pick one or a few and make a difference, but don't go looking for misery from everywhere. You'll surely find it. Especially if you watch the news.