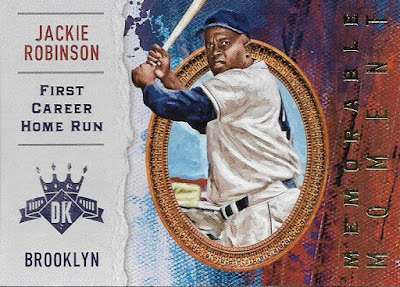 I think everyone knows by now that I reside in a cardboard wasteland.

There are no thrift stores that contain cards. No antique shops either. There are no flea markets. There are no card shops (there was once one that has since morphed into a memorabilia/sportswear shop). Card shows make a stop an hour away from me 2 or 3 times a year.

Fortunately, the internet compensates for that. I often think what my collection and perspective on cards would be without the internet. No doubt, the collection would be much smaller and far less varied. And my perspective would probably be rooted in 1993. I'd likely still be on a quest to figure out what happened to Fleer baseball cards.

I've come across collectors who don't follow the hobby online. It's obvious they are not up on the current state of cards at all. Often they are 20, 30 years behind. And that's fine if you're not interested in the cards being made today. It's not like you're going to be asked to a dinner party where you'll have to discuss the latest hobby innovations.

So, although I live in a sheltered area when it comes to cards, I am not sheltered. I know what's going on in the collecting world, more than most people anyway (and, no, I have no desire to have any more knowledge than that).

Yet, living in the wasteland still has an effect, in terms of awareness.

For instance, I recently received a smattering of cards from Jon of Community Gum. Jon lives in Chicago. If you were to ask me "where is the place where you can find All The Cards," I would point immediately on the map to Chicago. It's proven itself time and again.

Out of the selection of cards in the envelope, the majority I could never find where I live. 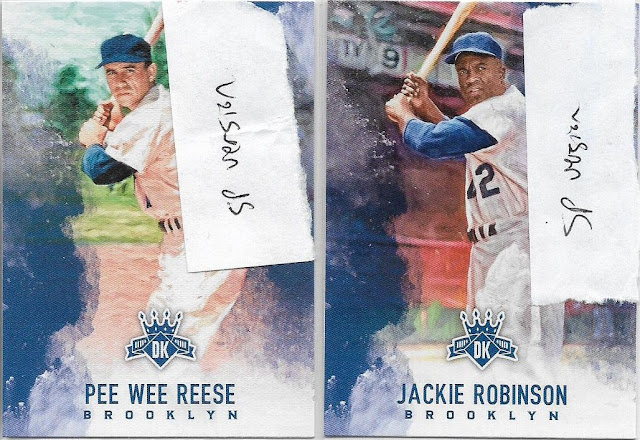 Jon was nice enough to point out that both of these 2017 Panini Diamond King cards are short-prints.

That's terrific. But I had no idea there were short-prints in this set because I haven't seen a single card from this set because I believe it's hobby shop-only (or at least once was). And there ain't no hobby shops around here. Hell, everyone got excited when they built a Sonic in town three years ago. 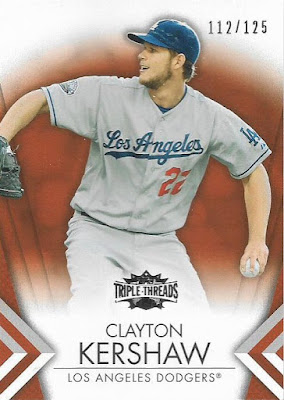 Triple Threads. It is the honest truth when I say I have never seen Triple Threads for sale in person ever in my life. I couldn't tell you how they're presented in a box, what the wrapper looks like, if there is even a wrapper, if they serve little chocolates with each purchase, nothing.

And there's always the "out of sight, out of mind" thing with Triple Threads. If it's not showing up at the retail outlet, I'm probably not going to think about looking for it online (the cards always look weird anyway). 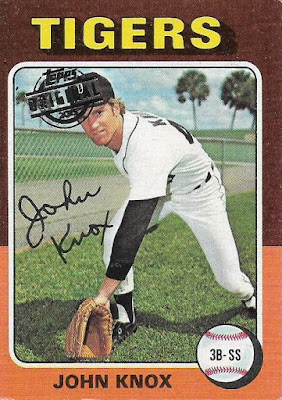 The buybacks that I am interested in -- only the 1975 Topps versions, please -- I believe showed up only in hobby packs.

Isn't that just the way? Today, you can pull 1988 buybacks from a pack of Allen and Ginter, which is just about the most jarring thing in all of 2017. But the 1975 buybacks only showed up in hobby boxes.

This card is my 181st buyback from the '75 set and there are some more on their way to me soon. These stamps that cover up the player's head crack me up. It nullifies the purpose of the card and underlines the weirdness of stamping buybacks at the same time. 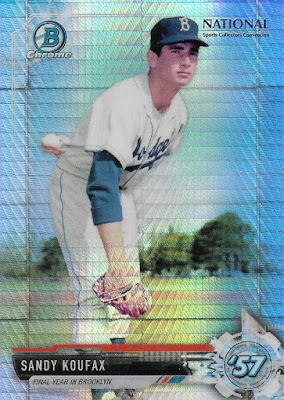 This fancy thing is definitely not found in the wasteland and I can only guess that it came directly from this year's National, which you may have heard took place in -- yup, Chicago.

It's odd seeing Koufax on a modern Bowman card, but it's as snazzy a card as you will find so there is absolutely nothing for me to complain about. I like it quite a bit. I guess I'm just a wasteland yokel.

There were just two cards in the package that I would be able to find heading down to the places in town that offer cards -- Walmart, Target, Walgreen's, Rite-Aid and sometimes the Dollar Tree: 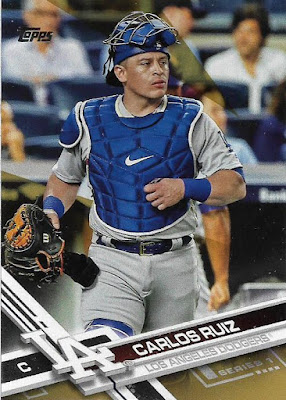 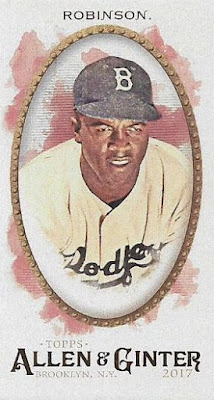 A couple of parallel items from this year's products.

I shouldn't complain about where I live. It may be a wasteland, but I don't have to deal with heavy traffic, crime, parking issues or any of the other side effects of congestion.

And I've got people sending me unobtainable cards from various areas of the globe.

Sounds like the best of both worlds to me actually.

Robert said…
I also have never seen a triple threads pack for sale. I've also not taken the time to find a hobby shop since I moved down here. That's how much I rely on the internet now for a good portion of my collecting.

Matt Prigge said…
Being on the east side of Milwaukee with no car is nearly as much of a wasteland. There are shops and shows around, but I can't get to them without a ride. I am also a collector very much dependent on the internet.
September 11, 2017 at 9:28 PM

Old Cards said…
I am one of those collectors 30 years behind. Although I don't collect current cards, I enjoy your blog, because of your perspective on collecting and the way you mix in enough of the old cards to make it interesting. My collecting is done totally on the internet, but there is a monthly flea market in my area where my brother-in-law has bought several cards for me. One day soon I plan to go there.
September 11, 2017 at 10:30 PM

Fuji said…
When I finally retire and move out of the Bay Area, one of my new home's prerequisites will be "no traffic". If I could trade the handful of card shops, flea markets, and card shows for less traffic... I'd do it in a heartbeat.
September 12, 2017 at 1:02 AM

Hackenbush said…
I miss Chicago a lot but I definitely do not miss the traffic and especially not the street parking. Imagine coming home in the winter and not knowing if you're going to be able to find a parking space. My parallel parking skills were lower than average when we moved. I hesitate to think about how they may have gotten worse.
September 12, 2017 at 8:36 AM

BobWalkthePlank said…
I have nothing in my area except for a couple local flea markets. If you want a show or a shop you have to drive to Pittsburgh which is about 75mins without traffic.
September 12, 2017 at 10:48 AM

Nick said…
While I'm lucky enough to live in an area with a fair amount of card shows, flea markets, etc., I often think about where I'd stand in the hobby without the internet and, honestly, I don't know if I'd still be collecting at all without it. I don't know that I'd be able to live such a sheltered cardboard life with no outlets -- blogs, Just Commons, and the like -- to share my love for the hobby and/or increase my collection. Maybe I'd still be collecting, but I know it'd be a lot less fun without the 'net.
September 12, 2017 at 12:32 PM

Community Gum said…
Dude, you have a Sonic in town?? I would legitimately love for there to be one in Chicago. We're getting our first Culvers down the road from me soon at least.

I will say that even though I'm in the "big city" most of the card shops are in the suburbs and I don't have time to get to them anyway. Most of my buying is online or the lucky days every 2 years I get to go to the National. That Koufax was indeed from the wrapper redemption packs at NSCC.

I also work from home (no traffic), have a garage (no street parking) and dangerous crime is actually pretty centralized to two neighborhoods (all blonde housewives with kids in strollers around me).

With all that said, I think we're all in the same boat because I'm convinced card companies purposefully ship Chicago cards to non-Chicago cities to force sales and trades.
September 15, 2017 at 1:30 AM