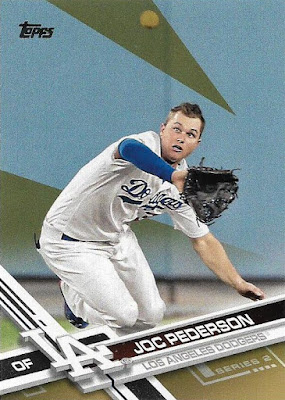 Longtime readers may remember that I was diagnosed with diabetes more than five years ago.

I don't often write about my personal issues here much (or at least keep them well-veiled), but I felt this event was important. I took the diagnosis to heart, both in chronicling it and in attacking it. Six months later I was told I was no longer diabetic. My doctor and nutritionist marveled.

However, diabetes, as many of you likely know, is a life-long battle. It takes constant persistence and I have overhauled my habits because of it. I work out daily, which was not even remotely the case five years ago. I monitor my eating routine, although I am the first to admit that it is a work in progress. I need to attack the disease aggressively every day.

What I do not do is take medication. I declined to take it after first being diagnosed and continue to do so.

I received my yearly check up today and the doctor again marveled at my state. All of my medical numbers are ideal and trending up during a period in my life when those numbers start trending down for almost everyone. My doctor, while periodically confused about me declining to take the medicine, now states flatly that I don't need it.

He wants to use me as an example for all of his patients and I get the feeling that if it wasn't for the patient confidentiality thing, he'd be sending my story out to everyone in the doctor's office newsletter.

I was even surprised by how positive today's visit was. I didn't think I was doing THAT well.

So, obviously, I am in a very good mood. And I'm going to celebrate with some cards.

These cards are from Gavin of Baseball Card Breakdown, so you know they will be perfectly appropriate for a celebration. 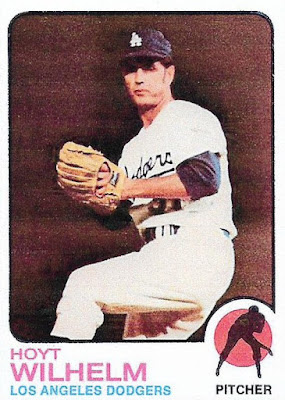 Let's start with a custom card of a baseball medical marvel, Hoyt Wilhelm. This is a card imagining what would have happened had Wilhelm received a card in the 1973 Topps set. He did, after all, pitch during the 1972 season for the Dodgers. 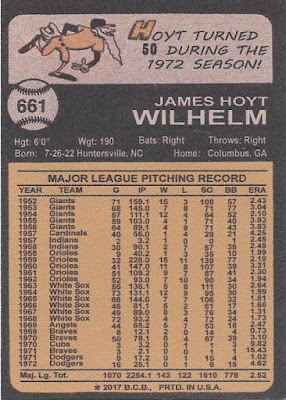 See? All of his stats are right there for you to review. And please note that he was 50 while pitching in 1972. I know my doctor would be impressed. 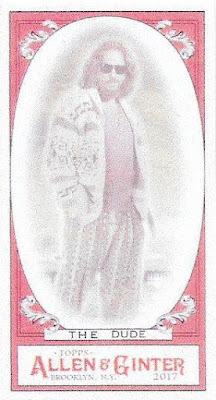 The other custom card was of The Dude, a fine complement to 2017 Allen & Ginter's World's Dudes mini insert set. I own but a dozen of the World's Dudes, but not many own the Dude of all Dudes. Pop in some Creedence and taken a gander at the back, which ties the room together. 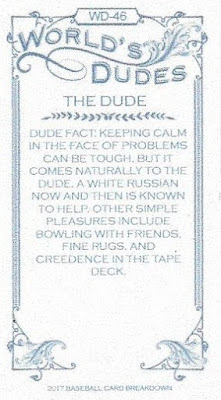 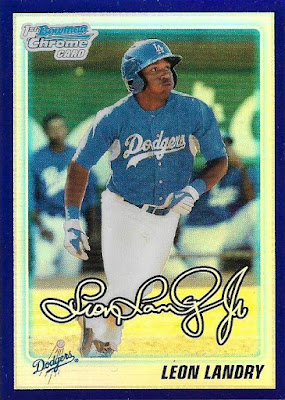 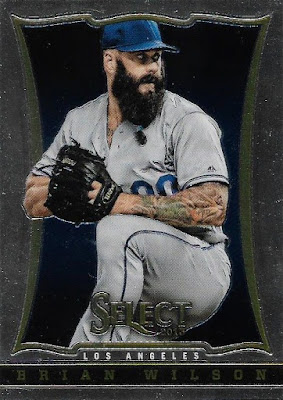 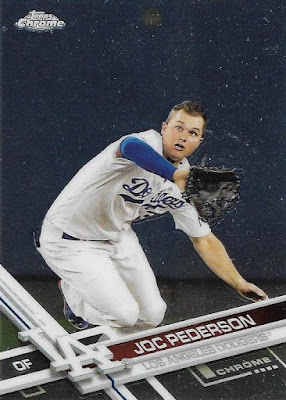 Gavin likes shiny, that's well-established. I do as well, although maybe not quite as much as I once did. The above are three Dodgers who have seen better days. Landry is still toiling in Double A ball for the Reds; Brian Wilson is out of baseball, thank goodness; and Joc Pederson is about to be called up after batting sub-.200 in Triple A. 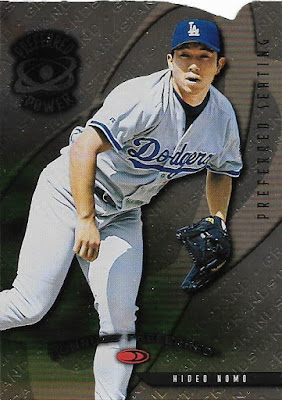 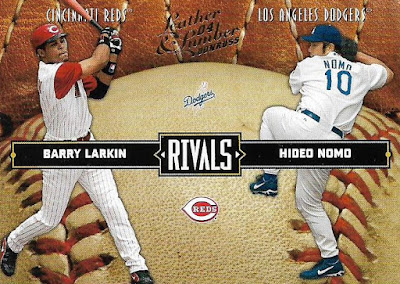 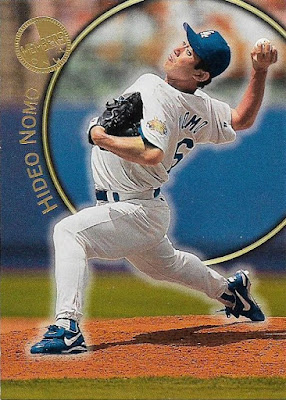 Here was the prize of the package for me. Three new Hideo Nomos! It's a bit disturbing how happy new Nomo cards make me.

They make me almost as happy as a positive doctor's report.

I'm not mentioning all of this medical stuff to boast (well, maybe there's just a bit of that). I'm simply hoping that my story can serve as the impetus for someone else dealing with the same issue. An inspiration, if you will.

I'm saying that it can be done. It ain't easy. It involves a lot of dedication. But my medical life is better than it was when I was 6, 7, probably 10 years younger.

Billy Kingsley said…
That's excellent. I came literally within 5 minutes of dying from it in 2013. I had no idea I had it, and it turned into Ketoacidosis. The medicine I reference needing to purchase periodically on my blog? That's insulin. I'm doing everything right and I am just now starting to get decent numbers- but still too high and wildly unpredictably all over the place. I have to take insulin at every meal and at the end of the day and start of the day too. Combined with my other health problems which I don't like to take about, I have a lesser chance of tomorrow than most. But I still keep trying to do everything right.
September 5, 2017 at 8:06 PM

Johnnys Trading Spot said…
Better make it a sugar free cookie, lol but that wouldn't be a celebration would it. Chips Ahoy, original or chewy?
September 5, 2017 at 8:32 PM

CrazieJoe said…
Glad you are doing so well and keep continuing to impress your Doctor!
September 5, 2017 at 9:14 PM

Nachos Grande said…
Congrats on the excellent bill of health!
September 5, 2017 at 9:55 PM

shoeboxlegends said…
Nice work on kicking diabetes' ass! It can't be easy, must feel good. Congrats and keep it up!
September 5, 2017 at 10:22 PM

defgav said…
Some notes:
- Credit to Gio at When Topps Had Balls for making the front of the 1973 Hoyt custom.
- To split hairs, the Dodgers (cruelly) released him just a few days shy of his 50th b-day, but I worded the cartoon to still be true. Also, turns out at the time, people thought he was a year younger than he was.. perhaps that's why the Dodgers didn't care about the milestone.
- The Dude custom features an "early draft" back that I wasn't really happy with. I'll have to send you the improved, re-worded version someday on the condition that you destroy the early version.
- I try to keep an eye out for any interesting Nomo cards at the card show, and hope you need them. But even if you don't, oh well, I'd just send them to Oscar instead.
September 5, 2017 at 10:31 PM

Nick said…
Congrats on the good news. My dad's been diabetic for longer than I've been alive, so I know it's not an easy thing to live with.
September 5, 2017 at 11:00 PM

Fuji said…
That's awesome! Based on my eating habits and lack of "real" exercise, I'm on the path towards diabetes. It's great to hear that it's possible to fight back without medication. Anyways... thanks for sharing this story. It gives me something to think about tonight.
September 6, 2017 at 1:17 AM

Mark Hoyle said…
Congrats on the clean bill of health. I have a friend whose dealing with some health issues related to diabetes
September 6, 2017 at 6:10 AM

Swing And A Pop-up said…
Glad you're being successful in managing your diabetes. Being diagnosed with it myself, I was surprised how changing your diet and exercising can have such a positive effect on it...although it sounds like you're sticking with it a lot better than I am.
September 6, 2017 at 8:05 PM