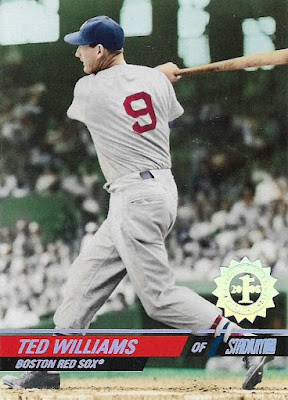 Today is the final out in regulation for what is essentially a tie ballgame.

Tomorrow begins extra innings. It will be the start of my 10th year writing on Night Owl Cards. Nine years ago today, in the wee hours of the morning, I wrote my first post.

This blog is nothing like it was when it first began, even though I feel like the same person when I started. Although I've always been a cynical writer sort, I've strengthened my resolve for what I believe in with this hobby. This is definitely a blog about what I like and what I don't like. No apologies.

But I've cut down on some of the railing about the modern ways of cardboard. As I've become older, I've just plain stopped paying attention to things that don't interest me. I find that makes the nurses happy when they take my blood pressure. Whether this particular way of coping is good or bad is not the point. I'm just telling you where I'm at.

So, how did we get here?

I thought I'd dig out a card for each year that I've blogged that kind of sums up that particular year and break it down by innings. This is how I've progressed through Night Owl Cards through the years and it does show you somewhat how the hobby has progressed since Sept. 13, 2008, or at least my reaction to it. 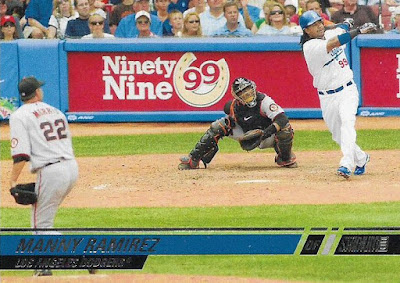 When I started NOC, card blogging was a different animal. There was no Twitter, so blogging was the reactionary medium. There was a lot of fuming and holding the powers-that-be's feet to the fire. Card companies got pounded on a daily basis. Beckett the magazine was ripped to pieces. It was an angry, crusading world.

I did my part, and chimed in on some of the hoodwinking on cards that we now take for granted. In 2008, Topps reissued Stadium Club and did some very weird stuff to it, none more weirder than the Manny Ramirez card. Ramirez was photoshopped from a Red Sox uniform to a Dodgers uniform, Fenway Park was transformed into Dodger Stadium (while keeping the advertising) and the umpire was rubbed out.

This was a flame-up that lasted for days. 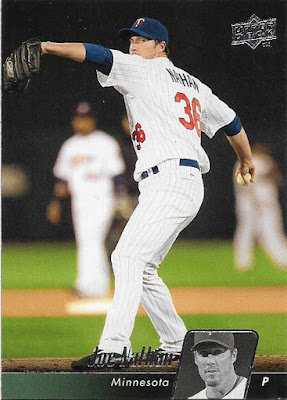 2010 marked the end of Upper Deck as a current baseball product. After more than 20 years in the game, UD did not exit with a whimper. Ordered not to show MLB logos on its cards because it no longer had a license, Upper Deck did just about the most passive aggressive thing I've ever seen on cards. It featured photos that showed logos. But the players were shown at a side-angle as if Upper Deck was saying, "see we're really trying" but actually they weren't trying at all. Weird.

It kind of summed up Upper Deck for me. At least readers were spared me crabbing about them for the next seven years. 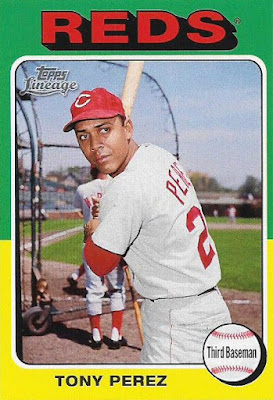 Three years into blogging I started to tire of collecting Topps' flagship set. My card world was expanding and I was finding other things that interested me. In the summer of 2011, Topps issued Lineage, basically the precursor to the Archives brand. The insert sets were the most exciting thing about Lineage, none more so than the 200-card insert tribute to the 1975 Topps mini set.

The '75 mini set is my all-time favorite set and for the first time, I attempted to complete an insert set of 200 cards. And I did it. Because I'm a wild man when it comes to '75 Topps. But it also was one of the greatest examples of the power of the online card blogging community and the internet in general. 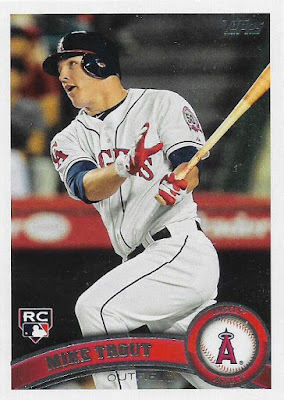 One of the things that took me awhile to digest when I returned to modern collecting was the emphasis on rookies. Although I'll never be a rookie collector, I now at least appreciate the meaning behind cards like the 2011 Topps Update Mike Trout.

For awhile, it seemed silly to me, a card that I pulled out of a pack of 2011 Update as easily as pulling any other card in that set, worth triple figures.

This card was the first card that reminded me of the crazy, stock-market world of baseball card collecting in the late 1980s. I actually owned a parallel version of this card and sent it away as part of a contest win. That tells you how long it took for me to grasp the weight of cards like this.

Although today, I'm more likely to sell this card to help pay off the future debt of my daughter's college education. 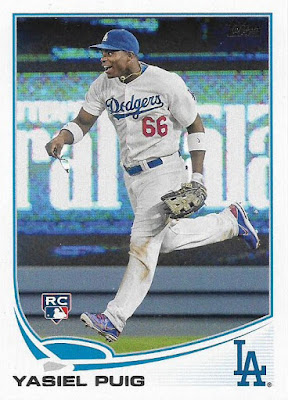 2013 was the year of sea turtles and Puig mania. After being so dismissive of rookie cards as a blogger, I received a taste of my own medicine as the poster boy for rookie mania wore a Dodger uniform.

I can actually tell stories of the kindness of collectors when it comes to the Yasiel Puig cards I received that year, and that's what I'll remember most from 2013 card-wise. 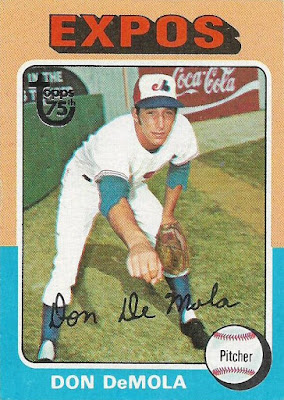 The birth of my latest obsession arrived in 2014. Topps, to tout its 75th anniversary, inserted older cards into packs but not before stamping the hell out of them and calling them buybacks.

Bored with most of the cards issued in 2014, I decided to take up these wounded 1975 Topps cards and shelter them in my collection. I'm closing in on 200 cards from the set now and I'm happy that these cards have a purpose again. 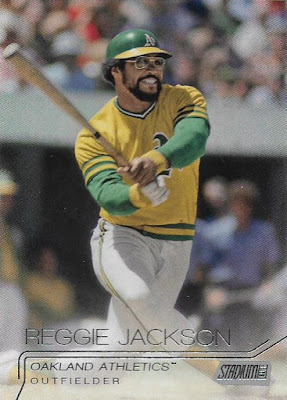 As grim as 2014 was for cards, 2015 is looking more and more like the last great year for modern cards. I completed not one, but two 2015 sets, flagship and Stadium Club. After a couple of imperfect issues (2008 and 2014), Stadium Club finally got it right in 2015, issuing the set in retail and providing one of the most beautiful sets of any Stadium Club product going back to 1991. 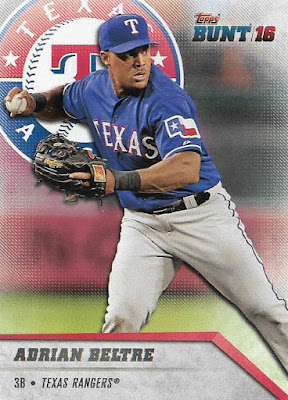 Sometimes I miss the old rebel-rousing blog days. We sure could have used them in 2016. I did my best by railing about the 2016 flagship set. I don't think I'll ever understand Topps' present mission to make concrete cards look as digitally enhanced as possible.

I wasn't exactly left without cards to collect in 2016. There was still Stadium Club and, of course, Heritage and Allen and Ginter. But the new Topps Bunt product provided something nifty to open that contained few frills and no short-prints. It was a huge hit with bloggers, even though I still don't think it's the most attractive set. 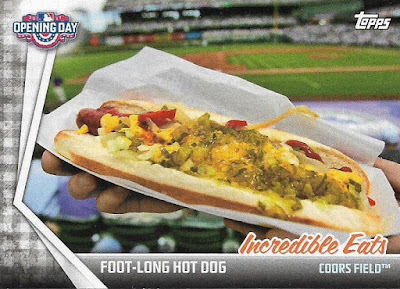 I admit that the current cards these days that excite/interest me the most don't contain baseball players. They contain food or musicians or hockey players or models or pseudo-famous people throwing out first pitches.

My interest in cards has expanded beyond baseball and simply into things that interest me. Perhaps one day I'll get the bug to collect ancient sets displaying dragonflies or bicycles.

I think this blog will always be primarily baseball-oriented. But I also like the idea of readers never knowing what they're going to get.

In year number 10, it will be more of the same, whatever that means.

A couple of things I do know:

2. I am probably scrapping my blog header and going with a more basic look. Protest if you like in the comments, but with people viewing so much stuff on their phones, I don't think people look at the presentation all that much anymore. It's all about content and that's cool with me.

I'll try to keep that content at a high level as we head to the 10th. 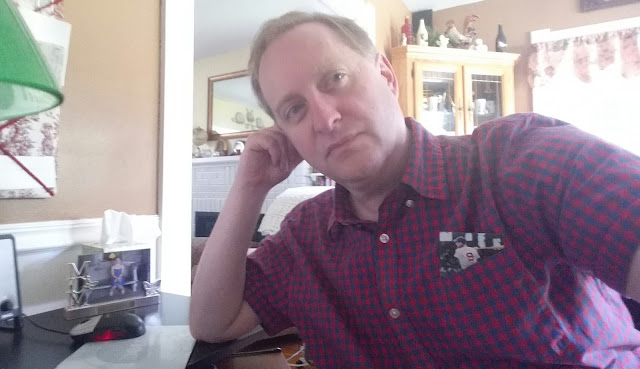 Join me won't you?

It's gonna get weird.

Nachos Grande said…
A great look back. Congrats on the longevity, you keep writing and we'll keep reading.
September 13, 2017 at 8:16 PM

shoeboxlegends said…
Here's to another 9! Congrats, it's not easy at all to stay dedicated to something for this long.
September 13, 2017 at 8:25 PM

Tony Burbs said…
Congratulations on the milestone - 9 consecutive years of anything consistent on the internet is a wonder, let alone such quality content from you on NOC. Here's to getting enough extra innings to break the MLB record
September 13, 2017 at 8:50 PM

Old Cards said…
Great cards of Williams and Perez. Looking forward to the the 1970's countdown. No problem with the change in your header, but sure hoping that the subject matter remains heavily baseball-oriented.
September 13, 2017 at 9:09 PM

Captain Canuck said…
congrats. You're 43 days ahead of me. (I had to look)

Nick said…
Here's to the next nine years! Feels like I've been around the blogs for almost a lifetime, but I'll only be celebrating my six-year anniversary in a few months. Nine years is a testament to your love for collecting and writing, which comes across in every single post I read/you write. And I've said this before, but I wouldn't be blogging now without Night Owl Cards. So thank you.
September 14, 2017 at 12:42 AM

Billy Kingsley said…
Congrats on 9 years! I hope I last that long. I've always wondered what the first card blog was...you seem to be the longest tenured blog that's still active. You keep posting them, and I'll keep reading them!
September 14, 2017 at 1:57 AM

Jafronius said…
Congratulations on your blogiversary! Looking forward to many more years of blogosphere dominance!
September 14, 2017 at 2:05 AM

Anonymous said…
Congratulations on your milestone! I'm really looking forward to the countdown!

Commishbob said…
Big thumbs up from me. Looking forward to the finish of this decade and the start of the next on NOC!!
September 14, 2017 at 8:00 AM

Bo said…
Congrats on 9! I'll be at 9 early next year, which is hard to believe for me as I still feel like a new blogger. As for your header, I always found it weird that the first thing I would see when opening such a rabid Dodger fan's blog was Mr. Met.
September 14, 2017 at 12:53 PM

Jongudmund said…
I've only been reading your blog and couple of months but I love it. One of the first bookmarks I check.
September 14, 2017 at 7:08 PM

Fuji said…
Damn. 9 years? Congratulations! As for the header... it'll be a sad day when it's gone. Always look forward to seeing that Chicle Jackie when I read your blog posts.
September 14, 2017 at 11:03 PM

Community Gum said…
The more things change, the more they stay the same. Except for the header, I suppose.
Technically on year 7 right now, although there's been too much down time to really count all of that, but a happy congratulations to you and I echo all the above sentiments of praise, good sir!
September 15, 2017 at 1:18 AM

Daniel Wilson said…
Congrats on 9 years! Glad you decided to start blog, even if it means I have to look at a bunch of Dodgers cards. Just kidding! I always enjoy reading your blog! Looking forward to many more years!
September 16, 2017 at 12:33 PM

Scott Crawford said…
Whoa! It's an Owl pic! Did no one else comment on the Owl pic?