There are no buybacks on life 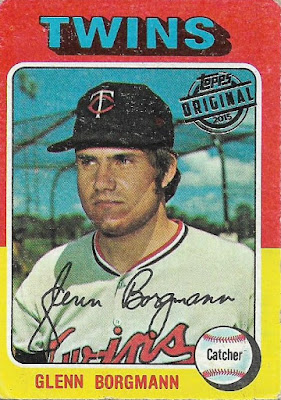 Boy, that's a heavy post title for a Monday, right?

I assure you all the title refers to is the fact that I am back to work after a week of vacation. I'd love to buy back my vacation (without giving up any of my salary, of course). But that's as deep as I'm going with this post.

This is yet another example of being able to do something with cards that you can't do in real life. You get to buy back cards from the past. Or Topps does anyway. Then Topps goes and plasters a stamp on the thing, proving that nothing in life is the way it should be.

But we collectors adjust. And I'm getting a great amount of fun in my attempt to "complete" a buyback version of the 1975 Topps set. I recently received the above Glenn Borgmann card from Shane of Shoebox Legends. It's one of his rejects from his buyback frankenset. I like pestering Shane for his '75 buybacks because I MUST HAVE THEM ALL. 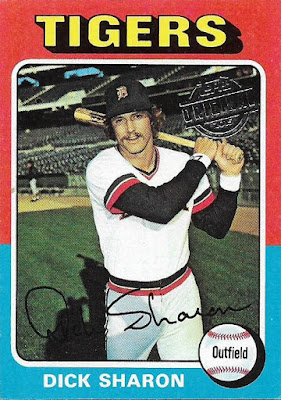 Shane added another one, too. This is one of my favorites from '75. I never saw it when I was buying packs that year. But it came across my radar not too long afterward and that began a years-long pining for this card. There is so much goodness to it, but possibly the best part is the shadow that also depicts the photographer crouching to take Dick Sharon's photo. Marvelous.

Shane also sent a couple more cards, but I can't break up the '75 buyback theme just yet.

That's because gcrl of cards as I see them sent a pair of '75 buybacks, too! 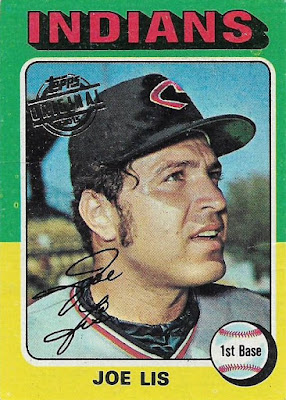 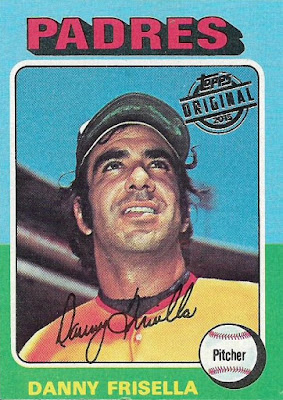 I don't know how he did it, but he managed to send two of the more reviled cards among us kids on the 1975 playground. We absolutely did not want these cards. If gcrl also threw in Bruce Ellingsen, Gene Locklear and Brent Strom, I'd be convinced that he was on the playground with us 40-plus years ago!

The four cards from Shane and Jim put the total number of 1975 buybacks I have accumulated to 137. I'm getting ready for another small modest shipment soon and 150 is not far from sight.

The thought of reaching that total just makes me giddy.

Shane sent one other buyback that is a keeper. 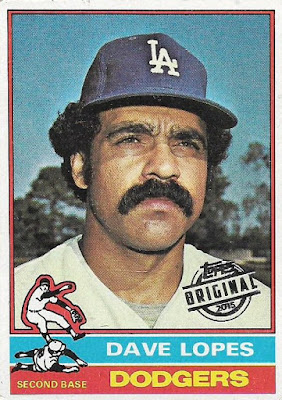 One of the greatest cards of the '70s right there. Normally I'd be horrified by the buyback stamp daring to steal some thunder from Lopes' mustache, but I think I have 3 or 4 non-stamped versions of this beauty and I'll gladly add it to my collection.

The other two cards from the Shoebox are both Kershaws! 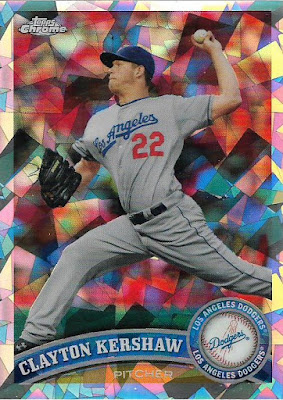 I devoted an entire post to this Kershaw 2011 Chrome atomic refractor a few years ago. Man, I love this thing.

I know that gcrl loves it, too, as he completed the full Dodger set of these. That means I probably owe All Trade Bait, All The Time some Dodgers at some point soon and this Kershaw will go along for the trip. 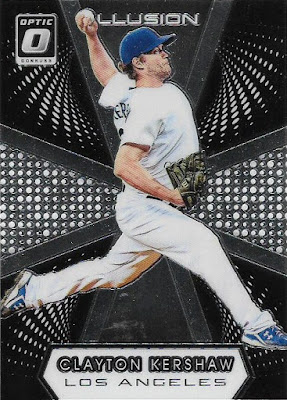 On the other hand, this Kershaw, from last year's Donruss Optic, receives the supreme honor of being the first card to be crossed off my brand new, under construction want list! This is a big deal. It means my new want lists are working! 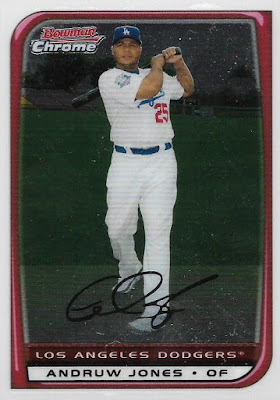 Jim checked out my want lists before they went kaput and I was able to determine that this Fat Andruw Jones card completed the 2008 Bowman Chrome team set for me. 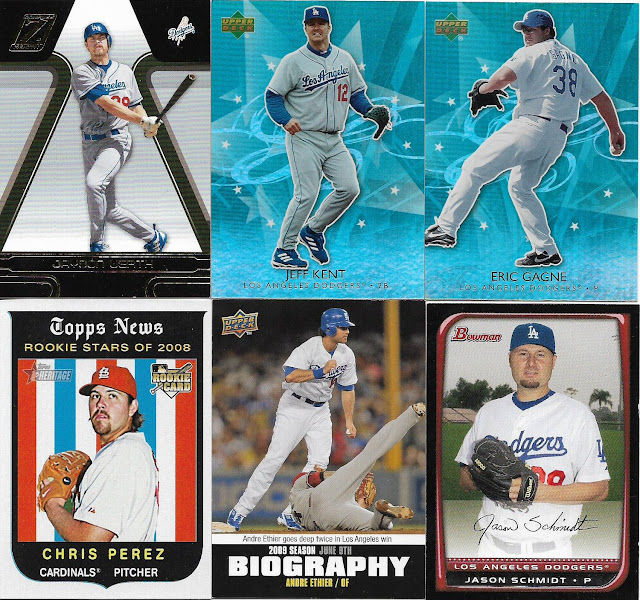 All these came from my former want lists, too. I checked them off on Saturday and then they vanished. But I do still have the memory of erasing Jason Schmidt off my 08 Bowman want list, which if you know what Jason Schmidt did for the Dodgers, is a terrific feeling. I should never have to want a card of a player who performed so pathetically. 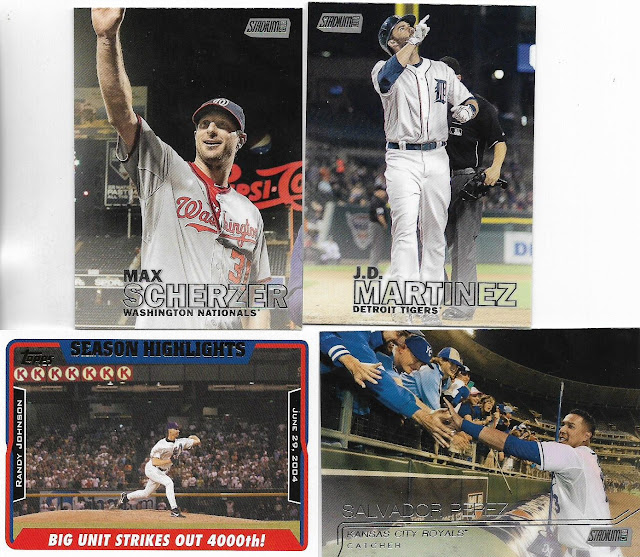 I also received some key night cards for the frankenset binder. I've kind of neglected the binder over the last few months. Time to get back to filling up that baby. 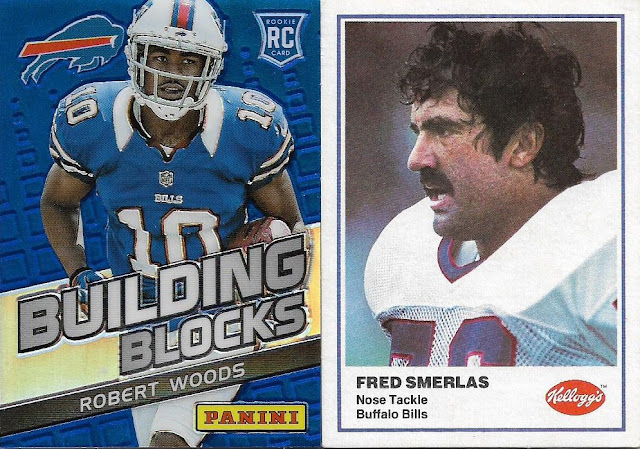 Finally, a couple football cards from Jim, the first he's ever sent me. I had no idea he was a football guy.

The Smerlas card is kind of neat because it's some Kellogg's issue from 1992 that I never knew existed. Smerlas was one of the first Bills players I ever interviewed, possibly the first one actually.

I've made a little more progress with the new want lists today, thanks to Scott Crawford's help in recovering my former lists. I'm now incorporating the old lists into a slightly new format, in which I list by year instead of brand and I am adding the names of players instead of just their card number.

Speaking of buybacks, I don't think I'd ever try to buy back my want lists, but there was a moment Saturday night when I was desperate enough that I would have jumped at the chance.

shoeboxlegends said…
Happy to have accidentally hit the new want list! I'm glad you have the '75 buybacks on the new list, I should be able to easily get you a few more now. Also, if you're having trouble finding a home for the Atomic Kershaw I'm sure Gavin at Baseball Card Breakdown would gladly accept it...
April 24, 2017 at 7:56 PM

gcrl said…
glad you were able to cross those dodgers off of your lists before the unspeakable happened. those bills were dime box fillers to get me to an even buck at a card show. the only football cards in my collection are a certified jack youngblood auto card and a whole binder full of brunell cards.
April 24, 2017 at 11:29 PM

Zvon said…
You know I complained about Topps stamping the buyback cards a while back, IMO making them worthless, but that's in an individual state. A complete set of 1975 buybacks is a different story, and I believe that would be a desirable and relatively valuable set. As a matter of fact, in set form is the only way I can see them having value at all. I commend what your doing and if I come across any '75 buybacks I will contribute to your cause.
April 25, 2017 at 2:10 AM

BobWalkthePlank said…
It looks like Ethier knocked that guy out on the Biography card.
April 25, 2017 at 7:52 AM

defgav said…
Yeah, it would definitely get a place in my 2011 parallel frankenset, though I totally understand about true Dodgers collectors getting first dibs.
April 25, 2017 at 4:32 PM