I don't need any more Cubs in my life

April 11, 2017
It's a couple days after a card show and that's when the card sorting really hits its peak.

I usually wait to do any kind of sorting until after a show and then add the cards I bought at the show to the other cards that have been waiting months for filing (I still have cards from my last show in September that need to be filed).

I didn't get any cards in the mail last week. And there were none today. It doesn't matter because card show, but still it's time to snap out of that funk. I just wrapped up a deal with Scott Crawford today. And I'm finally getting down to getting some cards together for Cardboard Clubhouse, Not Another Baseball Card Blog, 2 x 3 Heroes and Nachos Grande.

But what about the rest of you guys? Yeah, that's big talk from someone who takes two months to get a card package together. But I need to get some cards out of my house. 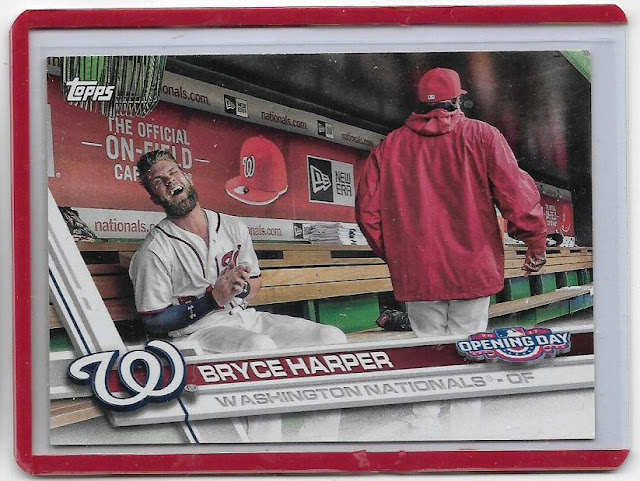 Now, I do admit I am rather pleased that I found a red-framed top loader to house this Bryce Harper variation card. But, come on, somebody needs to send me some cards for this thing.

I know that Kenny from Torren' Up Cards and GCA from The Collective Mind have expressed interest in this card. So they get first crack. Lemme know what you want to give up for this. I'm not that difficult to please.

Most of the rest of what I want to get out of here applies to the Cubs.

As you may have heard, the Cubs are the defending world champions. I'm pretty tired of hearing about it myself. I  actually was OK with it all during the offseason and even into the first week of the season. Then last night happened as ESPN had to air the whole damn trophy ceremony before the Cubs-Dodgers game and then proceed to fawn all over the Wriglies the entire game. ESPN is the biggest front-runner the world has ever created.

So then the Cubs went and won the game in the bottom of the ninth. Because the Cubs are now the perfectly built team that makes all the right moves or at least not the moves that cause them to lose games. The Dodgers, meanwhile, remain that team that is not quite good enough, they'll get to a certain high point, but then proceed to lose because they didn't gauge the wind right on a pop fly or have a closer who isn't sharp when it's not a save situation. Little stuff that will cost them against a team as finely tuned as the Cubs or the Giants before them or the Cardinals or the Phillies or the Mets and on and on. I've been experiencing it for years now.

So, although the Cubs will never be as hateful as the Giants or Yankees, I'm pretty much done with them. Here are some Cubs cards that I've pulled recently --  because, yeah, the Cubs are in every pack now -- that I don't need: 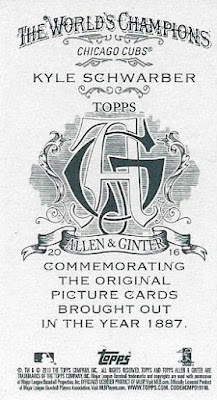 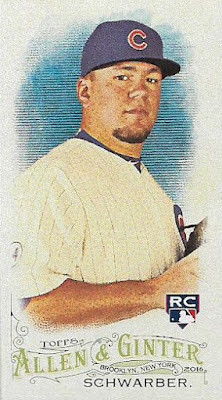 A no-number mini of Kyle Schwarber. 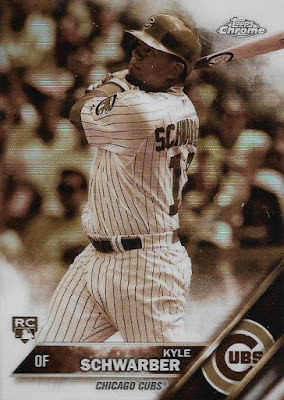 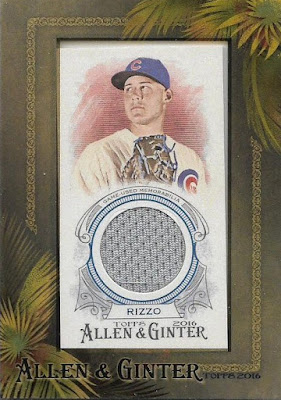 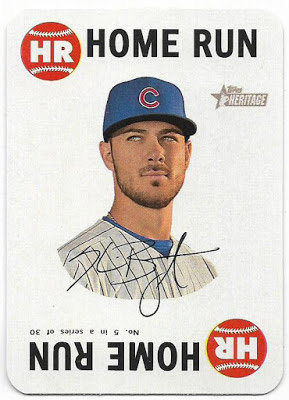 Perhaps this will draw the attention of a Cubs fan. Even though there are a lot of Cubs bloggers out there, they don't comment on here all that much.

I'm not really doing the #supertrader thing anymore so any Cubs blogger can chime in. Send me an email as negotiating in the comments doesn't seem to work out very well.

Also, if you can believe this, my wife just got back from Chicago yesterday.

She was there for a work conference and just got out as the Dodgers were getting in.

She brought me a couple of items. One was a Cubs T-shirt, which, believe it or not, I didn't mind. I won't wear it in public because people who know me as a Dodger fan will think I've lost it. But I'll wear it around the house.

The other item she gave me was this: 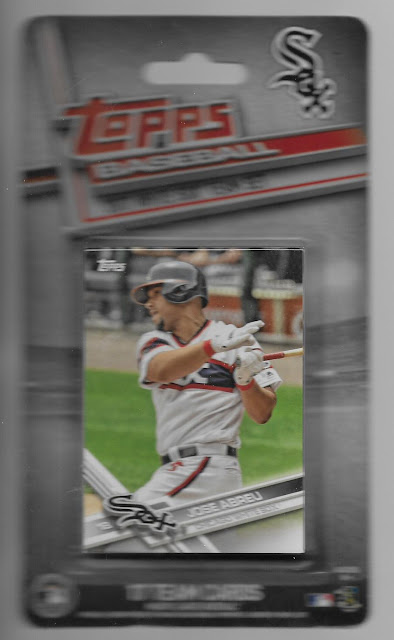 (Sorry for the blurriness, I scanned it instead of wisely taking a photo).

That's the 2017 White Sox team set. Seventeen cards. I have no use for this.

The only active White Sox blogger I know is JediJeff of 2x 3 Heroes and I suspect living in the Chicago area he has easy access to this. So I'm not sending this to him unless he says the word. Otherwise it's available to anyone interested.

Any trades that come out of this post will follow the same rules as any other trade: please allow a month or two months for night owl to get his butt in gear. If you can accept that rule, we may have a deal.

And, now, for something that isn't trade related.

I run a couple of other baseball card blogs -- team set blogs. Although they're not as well-read as this one, those are the kind of blogs that attract the occasional quote from a player or a player's family.

That may have happened with the 1971 Topps blog just the other day. 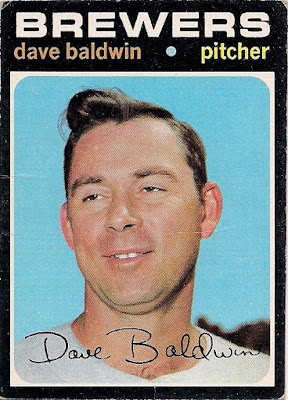 Dave Baldwin is 79 years young and apparently commenting on baseball card blogs. I posted this card almost five years ago, but on early Monday night came this comment on his post: 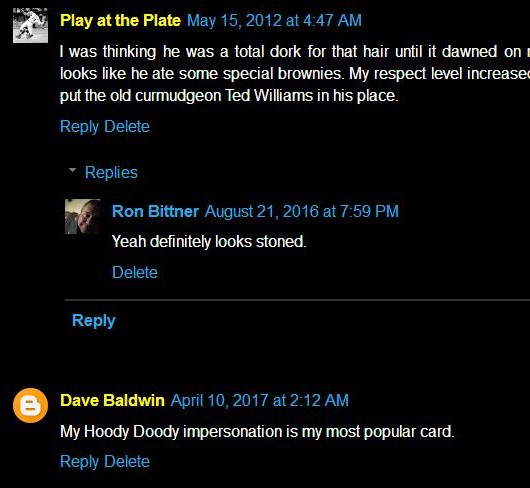 If that is really him, that's pretty darn cool and amusing.

The consensus on Twitter is that it actually was Dave Baldwin. Baldwin is a real hep cat as I found out when I did the research for the post on him. And I'm told he's very in tune with the fans. Here is an example.

This, of course, makes me appreciate his 1971 card far more than I ever have. Sometimes cards with players in full uniform and caps are overrated anyway.

So, that's enough housekeeping for today.

I have some cards to track down and to sort.

Johnnys Trading Spot said…
Heck, That Bryant card works for me too. And on the Baldwin card, Dave is right, pretty darn good likeness to Howdy Doody. Then again, draw some freckles on his cheeks and the Mad Magazine character comes into play. I have your package ready to go, just need to get to the PO. Enjoy!
April 11, 2017 at 9:48 PM

Brett Alan said…
Have a tough work project tonight, so I soooooooo needed that laugh from Mr. Baldwin.
April 11, 2017 at 9:59 PM

Once a Cub said…
What I want to know is why the random Tuesday off today in the middle of the three game series??

As a Cubs fan outside Chicago, is everybody hung over after the banner raising? Did Chicago as a city need the day to recover?

Fuji said…
A former major leaguer commented on one of your posts? That's flippin' awesome! You have officially taken things to the next level buddy. You were already king of the sports card blogs. What now? Emperor?
April 12, 2017 at 12:35 AM

BobWalkthePlank said…
I want people to suffer from Pirate fatigue so bad.

simpson said…
long time reader, first time caller. I wouldn't mind picking up that sox team set from you. I don't know that I have dodgers you don't, but I'll shoot you an email.
April 12, 2017 at 8:57 PM