All four cards were of Dodgers.

All four cards were of infielders.

All four cards were cards that I needed.

Do you know how difficult that is to do? Send me just four cards, of Dodgers, and have each one fill a hole?

That's operating on a whole other level. 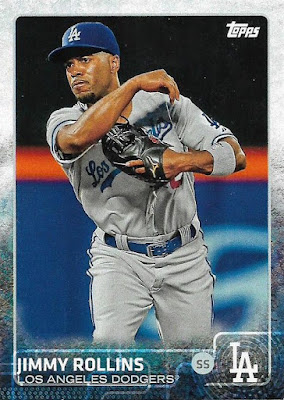 I'll start with 2015 Jimmy Rollins here. Those of you who know my collecting ways might be questioning my above statements already after thinking I must have this card already. And after becoming slightly concerned that you know and care that much about my collection, I would say: 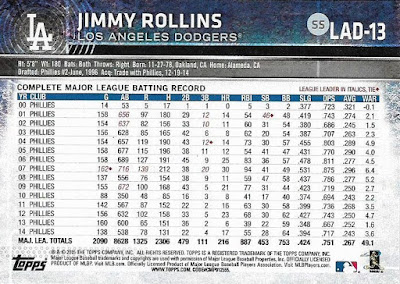 This is an important difference in the crazy, padded room world of baseball card collecting in which we team collectors reside. 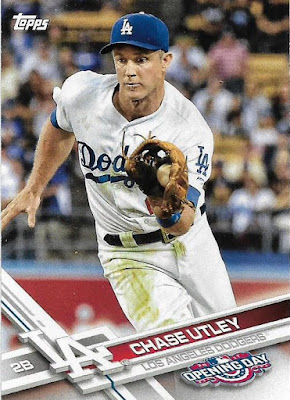 Second card. Another former Philadelphian. This card also resembles a flagship card. However, it is clearly an Opening Day card, different only in that it features a logo the flagship card does not have.

Once again, a noncollector reading this would think me insane. Why am I collecting a similar card for the sake of a logo? I'll just shake my head in response and tell noncollector to go back to their very sane, very boring world of plants or wine memes or whatever it is that they do in normal world. 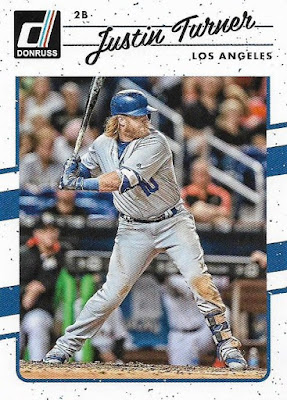 Third card that I did not have. It is, in fact, my first 2017 Panini Donruss card. While it is not as terrible as previous versions of Panini Donruss, I will repeat what others have already mentioned. Panini makes a fatal error in failing to continue what worked so well with last year's football set into its baseball set.

It's very simple: use team colors in the borders. 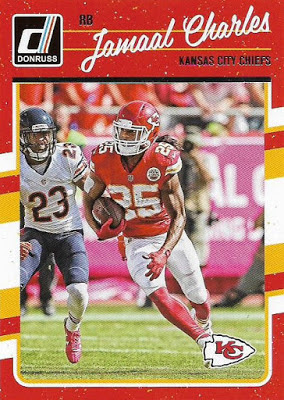 Why is this so difficult?

You could have actually had me buying your product, Panini! 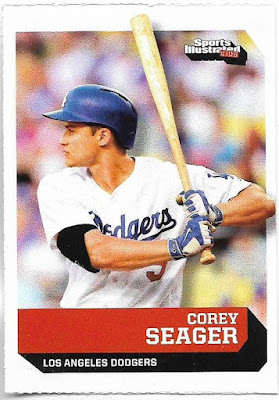 Last card. This is the one that AJ had to get to me. I can see why.

It's a Sports Illustrated For Kids card of Corey Seager. I believe AJ lands these cards through buying the SIFK magazine with airline miles or some such traveling wizardry. I am very pleased I do not have to fly for my job, it seems like a tremendous hassle to do on a regular basis. Not even SI for Kids cards could convince me to do it.

So I appreciate this card very much.

Thanks AJ for going through airport security check-ins to get me SI for Kids cards. And thanks for batting 1.000 on the package.

I'll be sending one in return soon. I will not have flown anywhere to get the cards and they probably won't be all cards that you need.

What can I say? There is only one Lost Collector.

Commishbob said…
About those Paninis....I assumed that the lack of card colors is a result of the non-license just like the lack of uniform colors. Have they used team colors before on their rogue baseball cards?
April 17, 2017 at 8:01 PM

The Lost Collector said…
Wow, 4 for 4! Wouldn't have expected that padding for the Seager would result in such success.

You are correct about using airline miles. I fly enough to accumulate them, but not enough to redeem them to go anywhere I actually want to. So I buy magazines.
April 17, 2017 at 9:05 PM

night owl said…
I suppose that's possible. Panini does use team colors with the striping on the design and in similar design elements in past Donruss sets.
April 17, 2017 at 10:19 PM

Commishbob said…
That's interesting. Well, if it's just a design choice than it wasn't a very good one. I bought one pack and it wasn't very interesting. I was lucky in that I got two or three guys I needed for my fantasy binder but other than that I sent a couple out, put the rest up and there they'll stay.

The Dodgers don't look bad, at least Turner doesn't. I just can't abide them painting all the orange stripes black on the Orioles. Looks awful.
April 17, 2017 at 10:41 PM

BobWalkthePlank said…
Airline miles are a huge pain in the butt. I use my reward for cash back or new beer glasses!

I love Donruss football. I've specifically chased WVU guys just so I could buy some cards from that set.
April 18, 2017 at 12:47 PM