Even though I'm a Dodger fan, I'm not really in a position to say that.

First of all, I live on the east coast. Scully was never the soundtrack to my daily baseball viewing. Whenever he popped up on my screen, usually as a broadcast cutaway or MLB Network airing, it was always a pleasant surprise:

"Hey! There's Vin! I get to hear Vin! So this is what everyone is talking about."

Secondly, I can't remember a busier time during the first week of the baseball season for me personally. I've watched no more than maybe 3 innings combined so far. I haven't heard enough of any broadcaster to miss them or hate them.

But, at some point, I know I eventually will miss Vin. It will be during a Dodger broadcast. And it will suddenly occur to me that, "hey, this is a game that Vin Scully would always broadcast." And I'll sigh and the game I'm viewing will lose some of the splendor that it held mere seconds before that thought occurred to me.

That will be a good time to go upstairs and stare at my Vin poster. 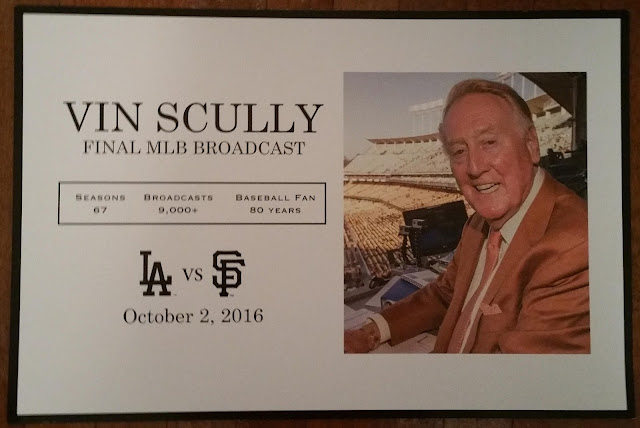 This was given to fans at San Francisco's ballpark on the occasion of Scully's final broadcast.

It's pretty nifty. Some might call it a "card" instead of a "poster," but "card" means only one thing to me. This is much bigger than a card, about 12x18, and you better believe it's going on the wall.

You can see that the Giants made sure Scully was wearing orange in the picture they selected. Charming. But all I see is Dodger Stadium in the background.

Overall, it was a nice gesture that could only happen because a man like Scully transcends mere baseball rivalries.

In that spirit, this poster was sent to me by a Giants fan. Jim, aka mr. haverkamp, must have attended this final game (the Dodgers allowed the Giants to win, 7-1, and clinch a wild card berth) and saved the poster to send to me!

This week I know will be easier than last week was and I fully expect to see more baseball. No matter who is broadcasting the Dodgers, I'll always look forward to televised games (maybe some day I won't be so cheap and order the MLB-TV package).

But, yes, I will miss the one thing that my team had that no other team had.

My team's games were broadcast by Vin Scully.

Big Tone said…
My first true extended dose of Vin Scully came,unfortunately,by way of video games. Playstation 1's MLB game franchise had him calling games exclusively and sad to say,It didn't do him any justice.In fact It was the one thing I hated about that game.Later on I got to catch a Dodger game on TV ,where I could appreciate his live commentary better than I ever could have In a video game.
April 10, 2017 at 6:07 AM

Fuji said…
Kudos to the SF Giants for honoring Scully with this cool piece of memorabilia.
April 10, 2017 at 10:37 AM

Commishbob said…
With MLB.tv games and my Sirius sports subscription I really had a chance to enjoy listening to VS the last few years. I mentioned in another post or maybe Twitter that many nights I'd finish the Orioles game and switch to the Dodgers. I could usually catch him on one or the other. Even if I only listened to a few innings it was a nice way to relax.
April 10, 2017 at 10:54 AM

Stealing Home said…
Wow! Now I have poster envy. Scully was THE soundtrack to baseball for my entire life, so I'm one of those who will miss him dearly. It's like one of those changes that mean life wll never be the same again. Overstating? No way. Anyone who gre from childhood to middle age with Vinny describing "cotton-candy skies" and "little nubbers" knows what I mean.
PS...the Giants were also cool enough to put a plaque up in their broadcast booth that matches the poster image. When the enemy honors you, you have done very well indeed.
April 10, 2017 at 1:13 PM

Stack22 said…
That's pretty cool of the Giants to produce something like that. Even if they did throw some subtle shade on the Dodgers by going with a shot of an empty stadium in the background.
April 10, 2017 at 6:18 PM