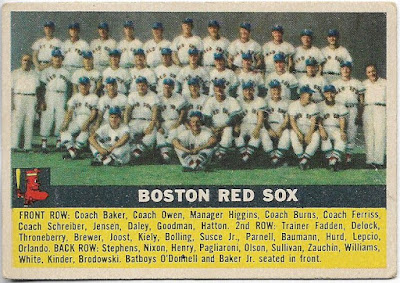 There is a card show this weekend that I've barely thought about because everyone picked this week to run around screaming with their hair on fire and there is collateral damage everywhere.

Usually by this time I've prepared a card show strategy and a list. I don't live in one of those places where there's a monthly card show. I need to reacquaint myself with the whole scene every six months or so.

But I haven't had time to make any list. And I have only a vague idea of what I'll seek out.

Let's see if I can formulate some sort of plan in the precious few minutes I have to write this.

If I am focused and find the right dealers, I should start with the 1956 set. It's about time I do some real damage with that set. Not Mickey Mantle or Willie Mays damage, because who knows when that time will come when I win the lottery, but damage to some of the pesky pricey cards.

Such as team cards.

The team cards in '56 Topps are rather vexing. Not only are there weird variations ("team name to the left," "team name centered"), but the cards can be semi-expensive for something that doesn't look all that appealing, a jumble of murky people standing in rows that you can't identify.

But because the caption key at the bottom says "Williams" and tells you that he is the fourth guy from the right -- yeah, I guess if I squint it kind of looks like The Thumper -- then it's not cheap.

I should really nab a few of these at the show. Along with some other '56s with faces I can recognize.

Some other possibilities this weekend:

-- Landing the last two 1972 Topps cards I need. I highly doubt I'll find a Pete Rose card or Tim Foli In Action card for a price I want to pay.
-- Dodgers cards from the '60s. Most of what is left on my want list is high-priced high numbers.
-- A&G minis. I'm still sifting through the haul from the last post. I'm good for now.
-- Relics and autographs. That's not my world.

Making a list is one of the great parts of the card show experience, so I do hope I get to form something more concrete than what I have here. But regardless, it should be a great time as usual. 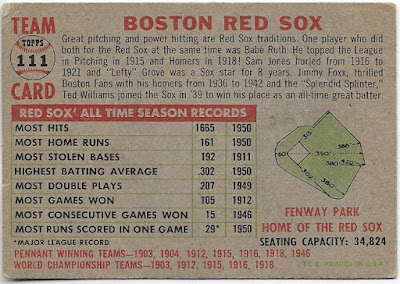 I'm off to trudge through another extended work night/day. But at least there's a card show on the other side. It's been a long, long, long, long wait.

Brett Alan said…
I was lucky enough that the small collection of 50s cards I got from my uncle included 13 of the '56 team cards, including the Red Sox. Certainly weird with the different formats. Hope you get some good buys at the show.
April 7, 2017 at 11:44 PM