The boycott is over 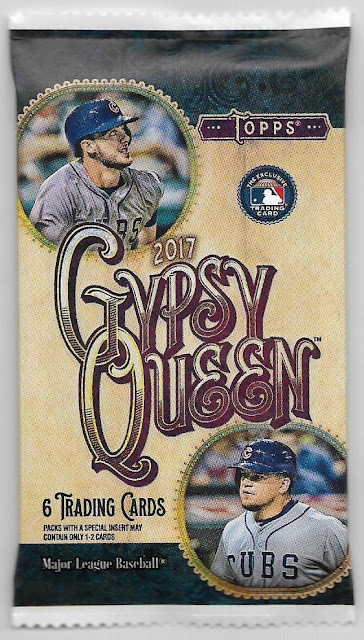 I have not purchased so much as a pack of Gypsy Queen in four years.

While I run around frantically trying to complete at least the team set for any card brand available in retail, I ignore Gypsy Queen. There are team set needs on my want list from GQ from 2014, 2015 and 2016 that I barely know exist. That's how undesirable this product is to me.

But I had spotted images of this year's GQ and for once the design didn't look like dog crap that's sat out in the sun too long. Topps had toned down the ornateness that gives me the creepy crawlies and had actually incorporated some color into the set.

It still isn't a set for me, but let's just say I noticed.

Yesterday I was running errands and arrived at the usual big box stores. I needed to get some printer paper so I could surrender all of my financial records to various institutions of higher learning just for the shot at some measly cents off of their ransom ... er, tuition ... demands. I needed to buy a greeting card for someone who is old enough to insist on a greeting card. And I had to look at some power saws because I practically live in a damn forest that rains tree branches every winter.

So with that rant out of the way, the rest of the story: I went first to Target, fully intending to finally use my coupons to nab a blaster of Heritage. I arrived at the card aisle and there was every configuration of Heritage available except blasters. Hmmm. The only other coupons available to me were Series 1, Opening Day and Stickers. No thanks.

Off to Walmart I went.

After acquiring my various errand-boy items, I stopped at the miniature card aisle and promptly spotted multiple Heritage blasters. Of course. Determined not to pay full price for that, I settled on a fat pack of Gypsy Queen.

From what I've read briefly on GQ, it's not as costly as in the past (it's still $9.98 for a fat pack, but maybe there are more cards in it these days). And GQ has done away with minis, which I am happy about because minis with GQ designs are not fun to collect.

Each fat pack contains three packs of 6 cards and retail-only green parallels. This is another reason I bought this -- the green isn't the usual basement green you get from GQ. It is brighter and more to my liking. 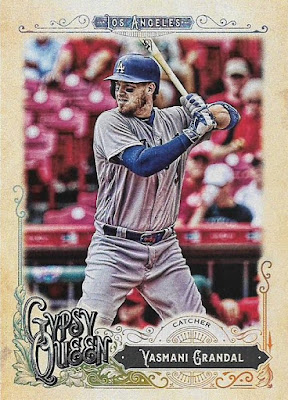 I have selected well.

There is the design. It features a neat border with most of the frufru shoved down to the bottom of the card. I appreciate this. The border color, while bland, is a lot better than some past GQ colors -- vomit yellow, dungeon green and stool-sample brown. 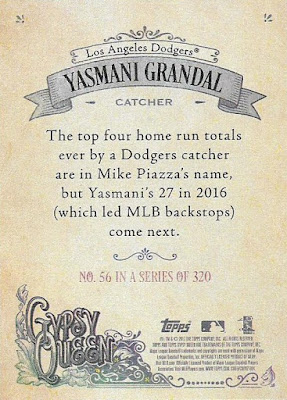 Even the backs look better. The faded look enhances the cardboard, as if it's a piece of parchment paper. And I like the line of color. 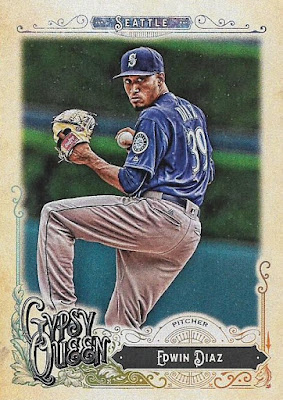 The dirty filter used on these cards remains. Toning down the design, however, does help draw out the photo. In past sets the crazy border squiggles clashed with the action image. 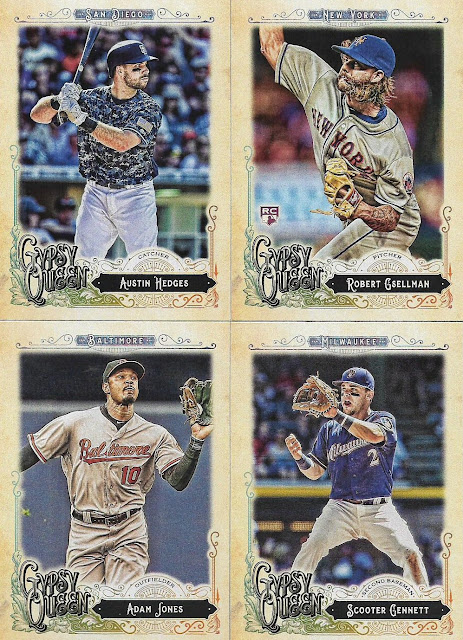 There's no way every GQ card is getting its own image on this post. Please note that for most of these cards, the team is referred to by its city name only, Panini-style. I don't know why that is, but it's weird as Topps usually flouts its licensing ability every chance it gets. 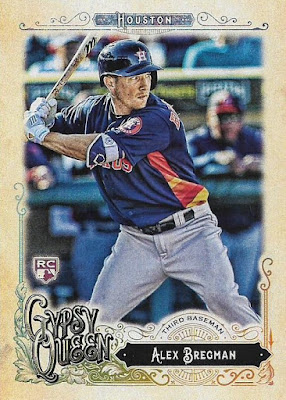 As usual, many of the players in Gypsy Queen look like they need a bath. 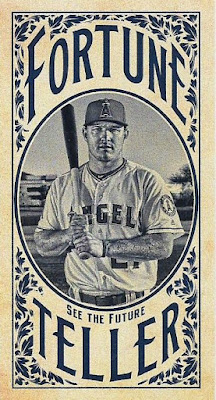 I pull a lot of Mike Trout cards. This is one of the few (perhaps only?) inserts in Gypsy Queen this year. The card is the same height as a regular card but half as wide. 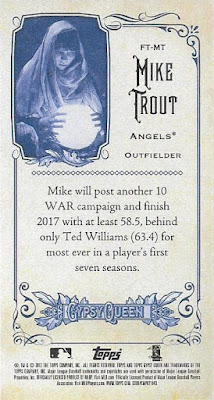 On the back it claims to tell the future.

Kind of nifty. GQ's strong point has always been its inserts. 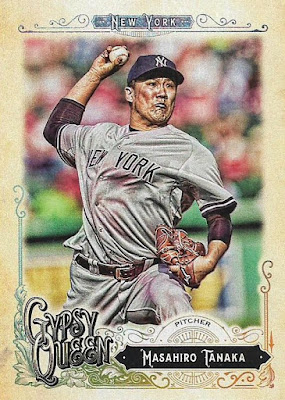 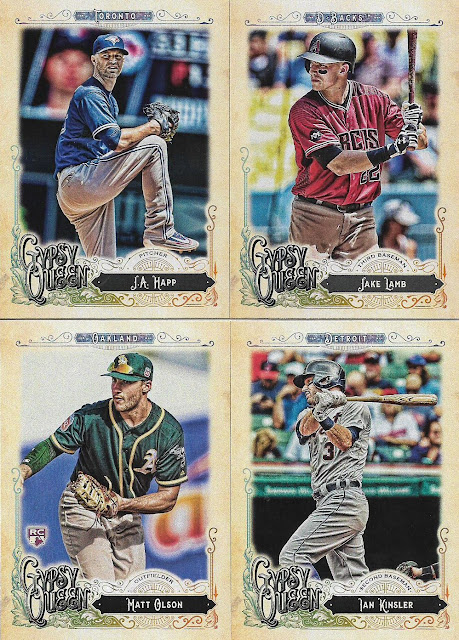 Please note that the Jake Lamb card does not list the team by the city/state, but instead says "D-Backs". I hope this isn't a variation. I'm a little sick of dealing with dumb variations. 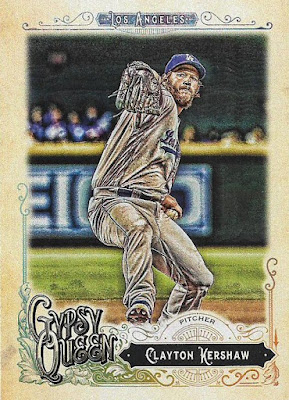 Woooooo! Somebody fire the laundry guy and get Kershaw a new uniform! This one is covered in filth! 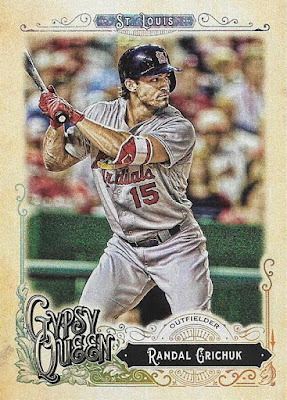 I expected just three green parallels based on past years, and was bracing for my Marlin, Mariner and Diamondback. But five cards came out. 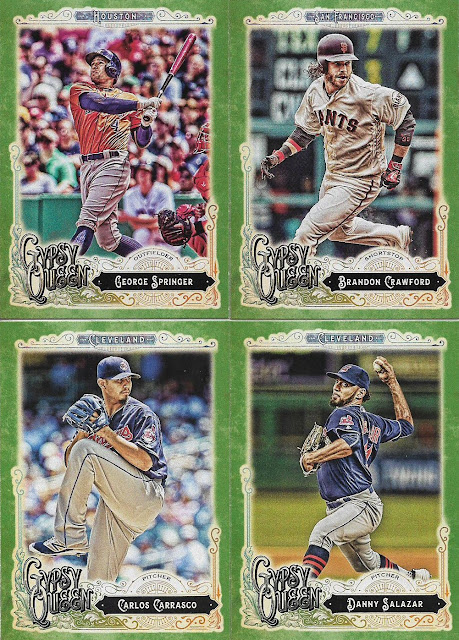 I like these. They're kinda perty. I could do without the Giant, of course.

But that's only four. I had to scan the fifth separate. 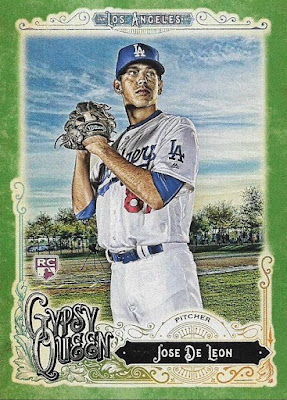 A Dodger who is no longer one. At least he's foreshadowing his new Tampa Bay digs with a green border.


This was a pretty good pick up, especially for Gypsy Queen. I don't see myself buying much of this in the future, but if I do grab it randomly in desperation during a future big-box store visit, I won't hate myself while doing it.

Commishbob said…
I'm totally with you on GQ...better than previous versions but not enough to actually buy more than a pack.

BTW...I had those Target coupons and my Target didn't have any of the blasters either. I went through the self checkout with two of the hanger fat packs and tried the coupon just for the hell of it. Didn't work but the lady working came over and overrode the machine and gave me a couple bucks off each pack.
April 12, 2017 at 9:49 PM

Hackenbush said…
I agree with you about the design. Best so far. I also agree about not being fond of the "dirty filter". It's like Topps is being stubborn, "We know you don't like it but it's what we chose the first year and we're not going to change it." Nice that you got the Kershaw, even if he needs laundering.
April 12, 2017 at 11:07 PM

Commishbob said…
aaaaand no sooner do I say that and I open an envelope containing an upgraded '58 and what did the guy use to bolster the vintage in the package? A handful of '17 GQs!
April 12, 2017 at 11:33 PM

Fuji said…
My favorite things about Gypsy Queen are the on-card autographs and the framed parallels. Do these green parallels happened to be framed?
April 13, 2017 at 12:02 AM

night owl said…
No, the frames are gone, which I don't mind.

GCA said…
Tried a pack of these too just to see them in real life. Not bad, but one of my critical tests is whether I can read the card numbers. I like that they are numbered "Old Bowman style" - "Number xx in a series of XX". But the fact that it's faded makes it hard to read. That is a no-go at this station. Nice try, but won't be doing these either.
April 13, 2017 at 8:48 AM

Kin said…
I agree with you. I really like the set and actually might consider trading to put it together. I don't even collect baseball, I just love the look of the cards. Nice job getting five of the green parallels. I only received three each in the two packs I opened.
April 13, 2017 at 9:10 PM