April 25, 2017
(Hello on World Penguin Day. This is the perfect excuse to post a Ron Cey card. But I'm not gonna do that. Because I gotta be me. It's time for Cardboard Appreciation. This is the 255th in a series): 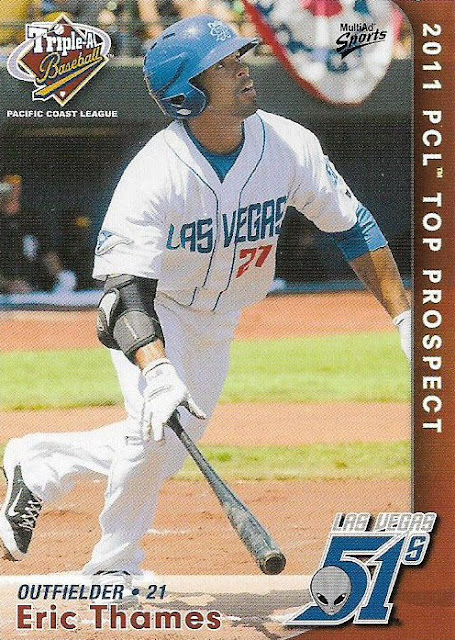 All of the Eric Thames autographed cards are gone. Or they're priced way out of your range. All of the parallels from 2011 and 2012, too.

Eric Thames is HOT! right now. All of the ebay listings say so.

Brewers Power Hitter! Red Hot! On Fire! MVP?? Rare! All of the exclamation points! And question marks, and asterisks, and dollar signs!!!!!!!

You can buy 30 of the same Eric Thames card for 65 dollars (but why would you?).

After Thames hit two more home runs last night to extend his major league lead to 10, I got caught up in the hype -- in my usual reserved way. I decided to see if I had any Eric Thames cards.

This 2011 minor league card of Thames, as a Toronto Blue Jays prospect, is the notable one.

Many people are discovering that the Brewers' Thames was a major league ball player before he arrived in Milwaukee this season, after three years playing in the Korean League. But he was a legitimate prospect before his trip overseas.

I have no plans to sell this card. I think by not selling I get to experience more of these instances where some player ignites out of nowhere and -- hey! I have his card! 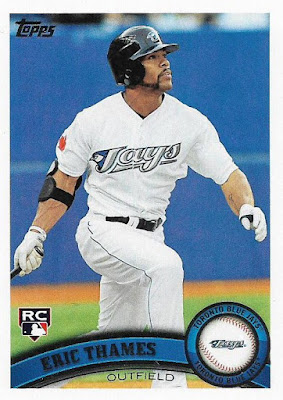 Neither of the cards I own of Thames are rare, as some the ebay advertisements say.

But what is rare is seeing the Brewers lead the league in home runs like they're Harvey's Wallbangers again.

And also rare is getting this guy on the east coast, who pays attention to a team on the west coast, to notice the Milwaukee Brewers.

Nachos Grande said…
Since 7 of his home runs are against the Reds (good grief), I wouldn't expect his binge to continue...the Brewers can't possibly play the Reds that many more times this early in the season, right?
April 25, 2017 at 7:52 PM

arpsmith said…
I had a few Thames cards listed on Sportlots and they have all been snatched up over the last few days. Most were priced in the 50 cent range. Never thought I would sell them so I am fine seeing them go.
April 25, 2017 at 9:10 PM

Jeremya1um said…
I first started collecting Thames a few years ago when I noticed the cool handlebar mustache on the '11 Topps card. Picked up his '11 Bowman Chrome autographed card a couple of months ago. Glad to see him doing so well, and cool minor league card.
April 25, 2017 at 11:06 PM

Stubby said…
I pulled his autographed card (2011 Bowman, I think) back when. Actually, I think I pulled 2 of them. Which is how I know he won't keep this up. Sell now, everybody, before the universe realizes I own this. Because the universe would never allow me to sell something for more than the price of a common. It would never let me sell anything, period. It just won't. I only ever once bought a set of cards as an investment. And, sure enough, it was going up, up, up. I got it right! For once in my life, I got it right! After several years, just when it had reached a price where I was ready to sell and retire to the Bahamas....they reprinted it. That sound you hear is the air escaping the balloon. And, yes, the reprints and originals all quickly settled at the same deflated price. No premium at all for the originals. It's OK, though. It was never my intention to make money on cards. I just like them. So I just went back to enjoying them, secure in the knowledge that, if I own it, it isn't worth anything (monetarily). Eric Thames, your 15 minutes are nearly up. It's not your fault, Eric. Its just that you had the misfortune of me pulling your autographed Bowman years back. I am so so sorry. I apologize to you, too, Jeremy.
April 25, 2017 at 11:46 PM

defgav said…
Just last night I got around to checking my 2011 Topps parallel frankenset checklist with fingers crossed that the Thames was among the 38% already complete.. hopefully present in the form of a liquorfractor or I'd even settle for a diamond or gold parallel.. but nope, nothing. :(
April 26, 2017 at 4:11 PM

Stubby said…
The 1987 Pan Am Games Team USA, with Frank Thomas, Jim Abbott, Tino Martinez and a crapload of other future major leaguers of lesser stature (Chris Carpenter, Ted Wood, Scott Servais, Pat Combs, Ed Sprague, etc., etc.). It supposedly had a very low print run (like 200 or 250), although they seem to be everywhere these days. I can't seem to find anything online about the print runs at present. I bought 10 sets and the price had risen to near $2000 per by 1990. Then they reprinted it. The reprint is red bordered (the original was blue bordered) and was allegedly printed in the same quantity as the original run. The price dropped like a stone. For a while, they both hovered at around $200 book. You shop around, today, you can probably pick a set up for $10-$20. I have noticed that there has started to be a tiny bit of distance between the 2 sets, now that they're both cheap, with the original at a tiny premium. I think that's because the blue bordered Thomas is harder to find centered. The slabbed 9s and 10s of Frank bring (relatively) big bucks. Mine are still wrapped in the original shrink wrap, so who knows.
April 26, 2017 at 11:35 PM