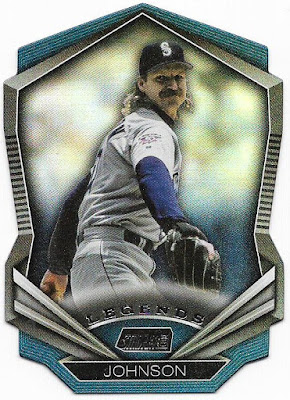 I went back out yesterday and got that light bulb. And I stopped by the card aisle and grabbed what I thought were more sensible purchases for my 2015 set-collecting needs.

So I bought the bulb, a hanger box of Series 2, a hanger of Stadium Club and one pack of Update. And when I got through opening them, I had the distinct feeling that my card knowledge was being tested.

First the highlights of the Stadium Club pack. 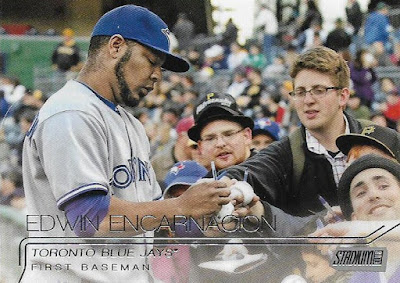 Nothing really notable, just the presentation of every base card as an EVENT, which I will always applaud. (Sorry, Edwin, I was rooting for the Royals). 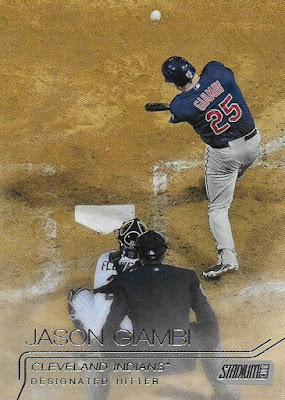 The pack helped me cross a few more cards off the want list. I think this set will disappear off store shelves before I come close to completing it because it's so darn pricey. I'll have to reapply myself and hunt for cards online. 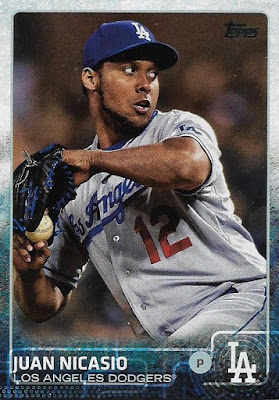 Next, the Update pack. It was just as useful, presenting me with one more Dodger who probably won't be with the team next year.

And just so the card gods can remind me that I got it wrong the first time, I pulled this card: 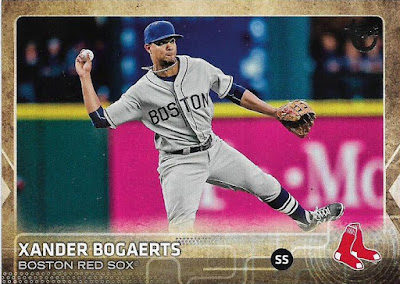 This is not a "gold" card (silly me, I was thrown by the gold card), but a "throwback" card -- can't I see the old-style Topps logo in the upper corner? No, I can't because I'm distracted by the much larger GOLD BORDER. Modern cards and their subtleties. Once again, I have a full-time job!

So, yeah, this is a throwback card because of Bogaerts wearing the throwback uniform. I know everyone is fascinated by these -- and throwback uniforms in general. It doesn't mean a lot to me. So I'll save this card for Mark Hoyle.

So, there I was being tested again. But I got that one right, how about that?

Now onto the Series 2 box. 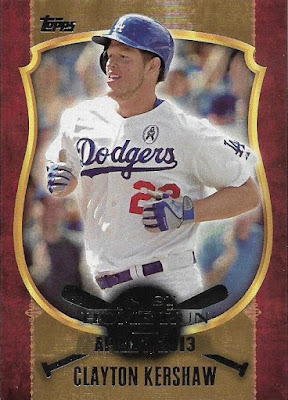 The box was almost a bust because retail collation remains abysmal. I haven't even bought much of Series 2 and I was pulling dupe after dupe.

I did pull this gold parallel of Kershaw's first home run card, so that's good for whatever part of me still believes I can complete parallel sets.

And then, in between the place where all of the inserts are stored, this fell out: 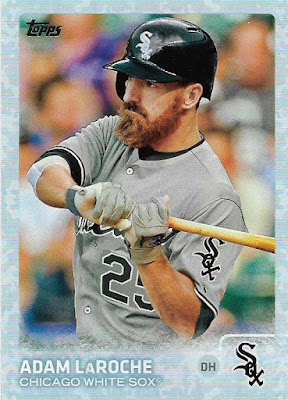 I actually saw the back of the card first and noted it was numbered to 99. When I flipped it over, my brain gave off a "wuuuuuh" noise that I know so well.

At first I thought it was some platinum card and I was celebrating for pulling a platinum card for the first time in my life. But that celebration is still waiting because I looked it up and it's not platinum.

Yes, I know box breakers and the like have been pulling "snow-camo" cards for months now, but step out of your box-breaker world for a moment and think about how ridiculous that sounds. A "snow-camo" parallel. We're very close to running out of ideas.

So, little ol' non-box breaker me, who gets distracted by vintage cards and oddballs and repacks and the like, had to look it up so I wouldn't screw it up on the blog again. And there on baseballcardpedia.com, I came across the fact that snow-camo cards in 2015 Topps are numbered to 99.

I had been tested again. But I passed the test that time.

That's when it hit me.

What the heck would I have done when I was growing up collecting cards and stuff like snow-camo parallels were being issued in sets? What if it was 1979 and I came across a gold-bordered throwback card or a pink parallel?

There was no place to consult to find answers for questions like that back then. Of course there was no internet, so there was no baseballcardpedia or Cardboard Connection or ebay or forums. And there were precious few trading card periodicals that kept collectors up to date on the latest card developments. The only thing you had were the individual checklists that Topps issued as part of the set.

So if parallels existed then, there'd just be a bunch of collectors wandering around saying, "huh, I guess this is some sort of special card." And that's where it would end, in all likelihood. (I suppose card shops and card shows kept people informed back then,  if you were lucky enough to live in a place where those things existed. And during the '80s we had Baseball Card/Beckett magazine, etc).

So thank goodness for the internet. ... Or, boo, internet for helping to allow things like snow-camo parallels to exist.

Anyway, I've already contacted the only Adam LaRoche collector I know and, appropriately, he lives in Canada. That's where most of the snow-camo cards reside anyway.

Commishbob said…
God help me but I think I actually like that 'snow-camo' LaRoche card. The border mixed with the gray/black uni and logos is pretty nice.
October 24, 2015 at 9:38 PM

Captain Canuck said…
I just hope I don't lose it in all of the background around here. It'll look great hanging in the igloo framed in walrus tusks and suspended with genuine Saskatchewan sealskin bindings.
October 25, 2015 at 12:48 AM

Tony L. said…
If in 1979 we had had all these parallels and the like, I'm thinking the best I would have done in figuring that out was that I might have caught on about 10 years later and realized that I did not, in fact, have only 7 cards to go for my 1979 set, but rather that I had 30 cards for the base set, 204 for the sparkle set, etc.

Mark Hoyle said…
Even with the internet I have a hard time figuring out some of the cards sent my way
October 25, 2015 at 8:40 AM

JediJeff said…
a) thanks
b) I almost take for granted the databases of cards we can access now, especially for those 90s sets where you have to try an figure out just WHICH set this one is named. Thank goodness for the inner tubes.
October 25, 2015 at 11:29 AM