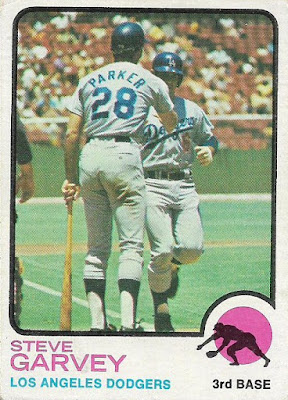 If you collected cards in the 1970s, you know this card. It is an example of a cameo -- gone wrong. It is a hyper-cameo, if you will. Wes Parker is hogging all the screen time, obscuring the subject of the card. This is almost more Parker's card than Steve Garvey's card.

But it's a popular and often-cited card because of how it's presented and how different it is. And people can interpret it as a "passing of the torch" kind of card as Garvey eventually succeeded Parker as the Dodgers' first baseman.

This card is also a precursor to what we're experiencing today.

I'll get to that.

The Garvey card, obviously, wasn't the only example of a cameo on a 1970s baseball card. There are several others, including several in the same 1973 Topps set, perhaps one of the most cameo-heavy sets of all-time. Here is another often-cited one: 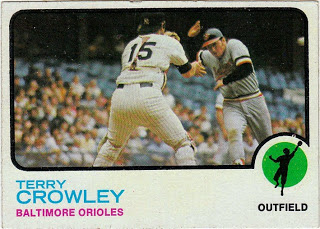 But cameo pictures have appeared on baseball cards probably since the beginning of cards. Here is one from 1956 Topps: 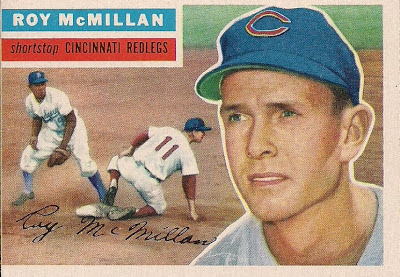 The second baseman is Jim Gilliam of the Dodgers.

Cameos were sporadic "accidents" on cards for decades. They were interesting because they happened so infrequently. And the cards on which they were featured lived on for years afterward because they were unusual occurrences.

And, if the stars aligned just right, you would get a cameo that included an up-and-coming superstar, which is what happened in the 1983 Topps set: 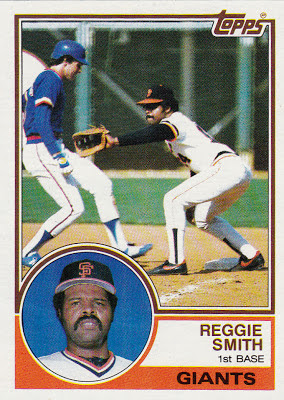 This card is now famous because of the cameo Ryne Sandberg made on Reggie Smith's card.

As the years went on, cameos sort of came out of the closet. They were no longer accidents or happy secrets, but intentional quirks that spiced up a card.

Upper Deck was very purposeful in its cameos throughout the 1990s, leading to cards like this: 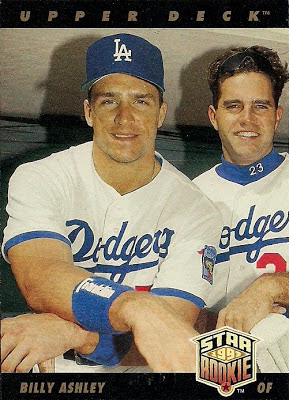 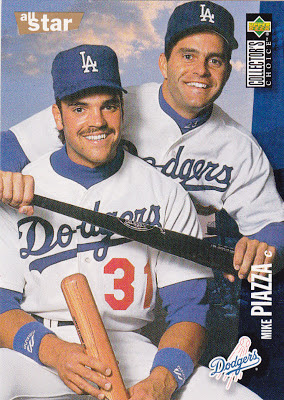 There are just too many Upper Deck cameos to count.

But what UD underlined was how fun these cards could be and how collectible they could be. Cameos are fun. They're interesting. Long-live the cameo!

In the last five years ago, Topps also has embraced the fun of cameos and you can find them frequently in the base set and even more often in the Update set. And some of those cameos are taking a different form, that resemble what happened on the 1973 Steve Garvey card. 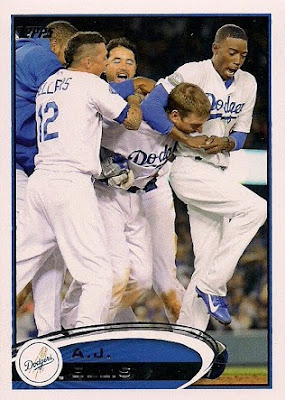 OK, sure, this is A.J. Ellis' card. But you could argue that it's Dee Gordon's card, too. And it's Andre Ethier's card and Justin Sellers' card.

Topps had started blurring the lines of how to depict the subject of the card. It's now a game of "Who's Card Is It Anyway?"

Nowhere is this more apparent than in this year's Update set. 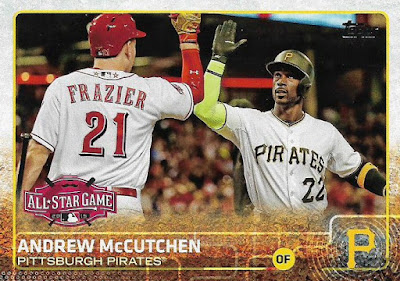 I'm fairly certain that 2015 Update has set a record for cameos. There are many, many cards that look like this. And the overriding reason for this is, as usual, there are so many extra, unnecessary cards in Update.

But before I get too negative on you, let's get back to the cameos.

It's kind of a fun aspect of the set, and as long as you can tell who the featured player is, it's harmless. But there are some cards where I feel like I'm being asked to figure it out for myself. "Who's Card Is It Anyway?" Is there a prize if I get it right? 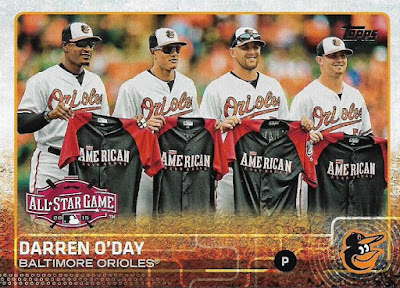 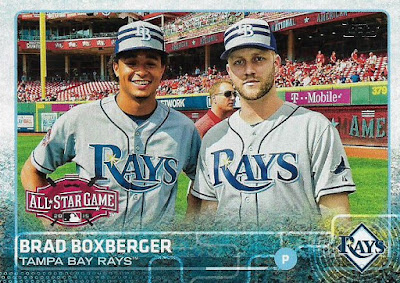 I've already mentioned these two cards. There is no identifying caption. So it's like Topps is saying, "you should know this stuff. You're a baseball fan, aren't you?" And while I like that attitude -- I can use a little push once in a while -- I still don't know which one is Darren O'Day (probably the guy on the right, I think). 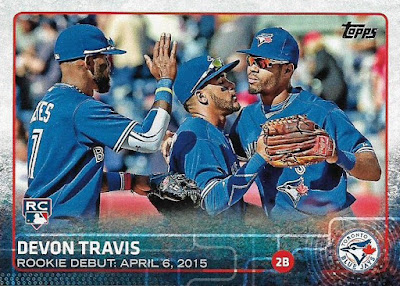 I just got done spending a week-plus familiarizing myself with the Blue Jays during the ALCS. But Devon Travis didn't come up. I need arrows or something here. Let's hope he's the guy on the right.

These are cards featuring cameos that make you work. This is the new world of cameos. 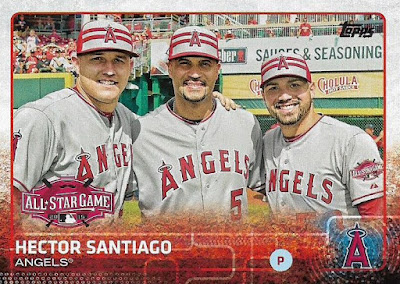 Today's cameos require process of elimination. OK, I know the Trout guy, I know the Pujols guy, so Hector Santiago's the guy on the right! Yay, me!

By the way, if I may go off on a tangent, someone has a semi-unhealthy obsession with Albert Pujols in this year's Update. So far I've pulled the above Pujols cameo card ... 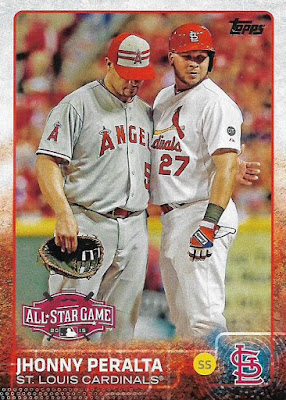 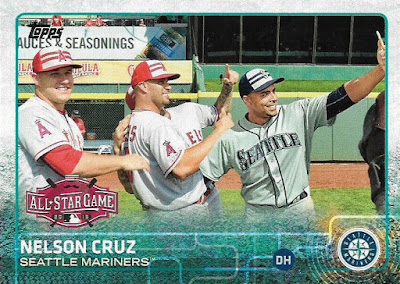 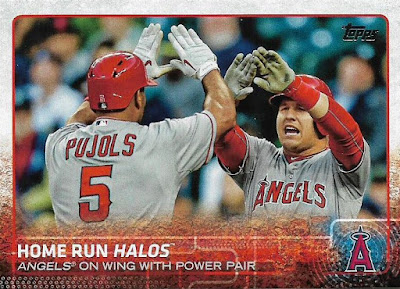 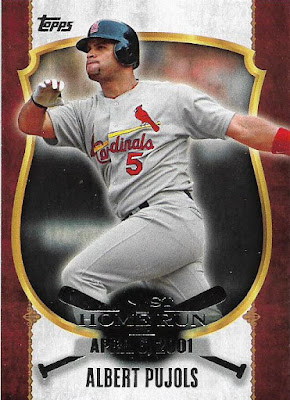 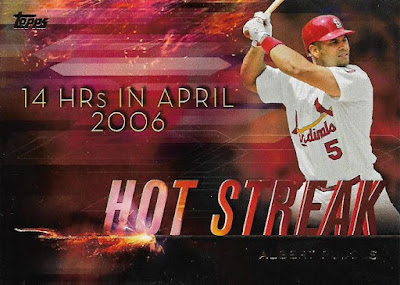 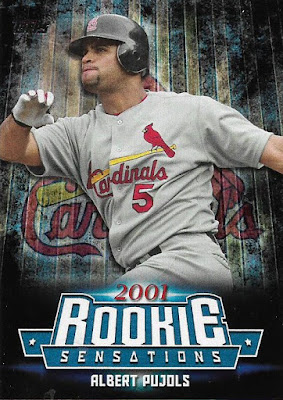 Plus a few more where Pujols is by himself (same image on two of them). 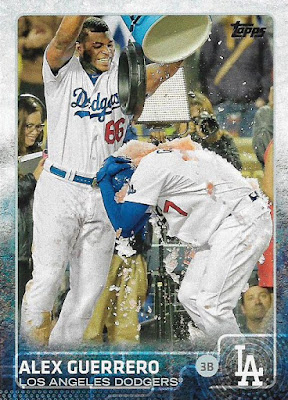 And then there's this card.

I wonder what Mamma Guerrero thinks of this card? Again, this is more Yasiel Puig's card than Alex Guerrero's card. And unlike the Garvey card -- where you can at least see Garvey's face -- all you get of Guerrero is a jersey number, the start of his last name, a bit of helmet and an arm.

That is a hyper-cameo if I've ever seen one. 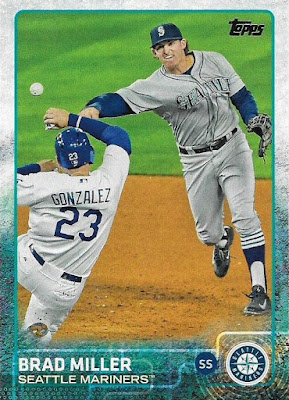 The sheer number of cameos in Update, while fun, is a bit overwhelming. And it makes me wonder if this is another aspect of collecting that will fall victim to Topps overkill. You know the deal: if everyone gets a trophy, is it special anymore? 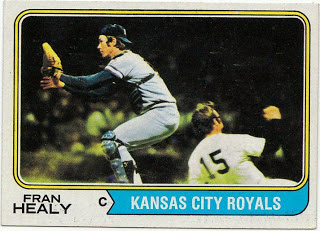 I'm not really sure where we're at now.

AdamE said…
I much rather the junk cameo Pujoles cards from this year than the Pujoles junk cards from a few years ago.
October 26, 2015 at 9:11 PM

And what's up with those 2015 ASG cards? The uniforms don't look quite white for either team to me. Did they really wear those striped hats during the game?? I never watch the ASG anymore (as a protest against the stupidity of using it to affect the postseason) but those hats just look a bit too truck stopish for my taste. I'm weird though... I miss the old nuclear orange Astros uni's & McDonald's look the Padres had. Oh, and I could go for some powder blue road uni's any day.
October 26, 2015 at 10:38 PM

Captain Canuck said…
the cards now are getting horrible.... I hope your next post is about all of the cards where you can't see the person's face. It's an epidemic.
October 27, 2015 at 12:39 AM

Anonymous said…
ABC is bringing back "To Tell The Truth" (honestly, go Google it), so Topps is getting us prepared.

"Contestant #1, will you state your name, please?"
"My name is Darren O'Day."

...And just so you don't have to wait for the real Darren O'Day to stand up, please, here are your 2015 Baltimore Orioles All-Stars: Adam Jones, Manny Machado, Darren O'Day and Zach Britton.

BobWalkthePlank said…
I like cameo cards to a certain extent, but they are focusing less and less on the actual person the card pertains to. It would be one thing if that Orioles card said Baltimore All Stars, but for it to say Darren O'Day seems lazy.
October 27, 2015 at 9:33 AM

Commishbob said…
I was just now typing up a post and it brought to mind the 1960 Topps World Series Game 5 card that shows an unaccredited (uncredited?) Maury Wills in his only Topps appearance until 1967. One of my favorite cameos.
October 27, 2015 at 10:48 AM

RAJ said…
I believe that Cincinnati Red shortstop Dave Concepcion made TWO cameo appearances in that '73 set (which I love)!!! Besides his own card, he appeared in Giant catcher Dave Rader's card as well as Indian outfielder Oscar Gamble's.
October 27, 2015 at 1:05 PM

Brian said…
Re Darren Travis: pretty sure he's the man in the middle..sounds like a song title or something. Don't know why but get the feeling guy on right is Dalton Pompey...maybe?
October 27, 2015 at 7:41 PM

defgav said…
These photos would be fine as the back photo on an early Upper Deck style card. But yeah, I'm concerned about cameo overkill on the front these days.
October 28, 2015 at 3:24 PM

Brett Alan said…
I've been going through a dollar store repack pack (is that redundant?), and it had a card that reminded me of this post: a 2000 Fleer Ultra Sandy Alomar Jr., except it's clearly a picture of two people--see http://www.comc.com/Cards/Baseball/2000/Fleer_Ultra_Gold_Medallion_Edition/144G/Sandy_Alomar_Jr/2313258 (this link shows the fancy "medallion edition", while mine is just the regular issue, but the picture is the same. I was thinking that was him and Sandy Sr., although I can't find any reason Sandy Sr. would have been in an Indians uniform around that time. Anyway, it's a nice enough picture, but if you're going to show two people, make it a two-player special and tell me who's who, you know?

There was also a Jeromy Burnitz from the same set with an Alex Ochoa cameo, but that one is the way a cameo SHOULD be--it's clearly a picture of Burnitz that happens to have Ochoa's back in the shot, similar to the Andrew McCutchen card above. Anyway, I think I wouldn't be enjoying this pack as much without this post!