Sucker for a pretty face 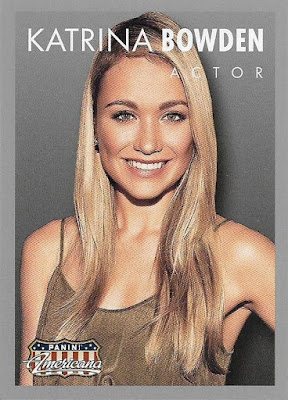 I like women. I've never hid that fact on this blog.

True, this is mostly a blog about baseball cards, which means 98.9999999 percent of the posts here display young men in the prime of their lives. Most of the time I'm elated to be collecting cards of these men. But then some girl on cardboard will clip-clop across my line of vision and ... what were we talking about again? What am I collecting? Dudes? WTF?

It doesn't make a lot of sense when I'm staring at a card of the beautiful Katrina Bowden, who if you ever watched 30 Rock, you know as Cerie Xerox, the desirable-yet-clueless assistant to Tina Fey's character. And this is how I got suckered into 2015 Panini Americana.

In the past, Panini Americana has been a joke of a set for me. Although I have a slight interest in TV celebrities, one pack of P-A was enough to scare me away from the product for years. The design was horrible, the pictures of celebrities too distant, the selection of subjects rarely interesting.

Then I saw this year's offering. 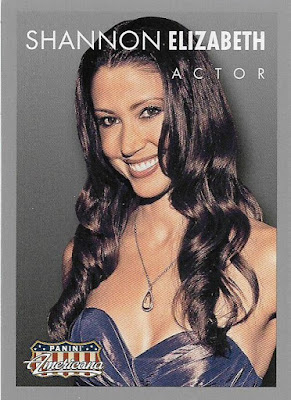 The cards are well-designed, and, no, I'm not referring to THAT. I'm referring to the actual design, you perv. It is a spare border and background, the better to highlight the subject. I mean, they're a celebrity. They're accustomed to being, um, highlighted.

Best of all, the celebrities are featured close up. That's what drew me to this set. And I've got to admit, it's because I'm a sucker for a pretty face. I suppose that's not unusual at all, but I've always been that way. Some guys sing the praises of legs, busts, booties. I've always fallen for the face. No girl has had to tell me "I'm up here." Oh, baby, I know you are.

So, with that in mind -- and aren't you glad I got into all of that -- you could see why this was not your average Americana set for me. 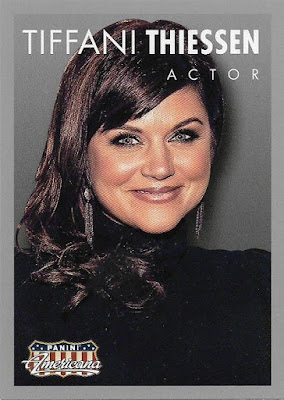 After seeing a couple of offerings on blogs, I decided that when I was out buying baseball cards, I'd pick up a pack or two of Panini Americana. And not just for the ladies, either. Because although P-A gets trashed for its B-list checklist, it's really not all that minor league. 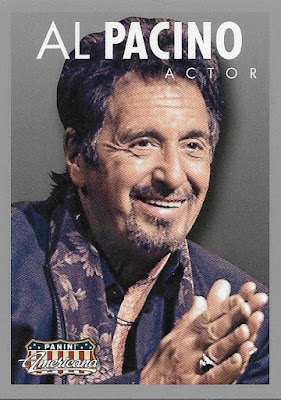 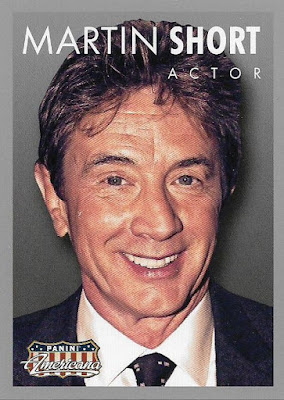 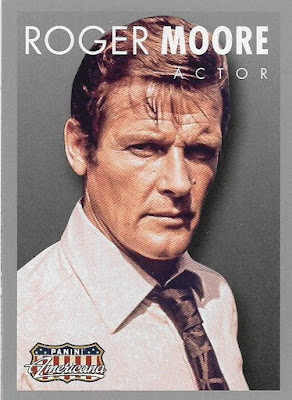 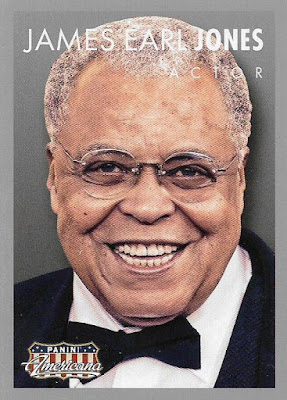 That right there is one of the greatest actors of my era, one of the few people who can make me laugh in virtually any situation, the man I still think of as James Bond, and Darth G-D Vader, you guys.

I don't know how people like that can be considered B-listers. 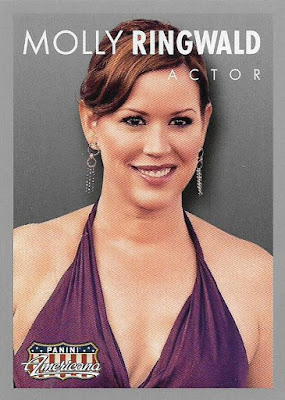 It's quite possible this set is made for vintage guys like me. Molly Ringwald may not be instant box-office success anymore, but she was when I was watching movies regularly back in the '80s. Don't you dare call Claire Standish washed up.

So after making 2 or 3 Target trips and grabbing a couple Americana packs each time, I got suckered into thinking about completing the set. It's a small set. I could do it. As long as I didn't turn the cards over and look at the backs (Panini still hasn't made a decent card back in anything), I could see myself collecting this ... casually. 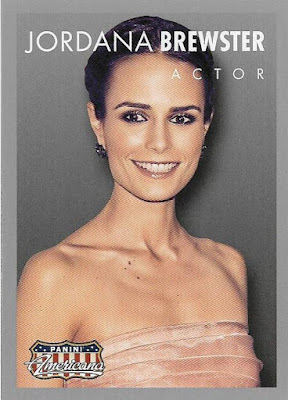 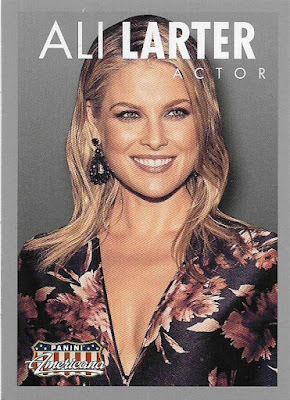 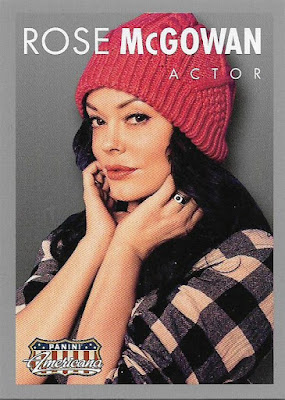 Yep, casually. No strings attached. Just a cardboard fling. Something on the side. Nobody needs to know. 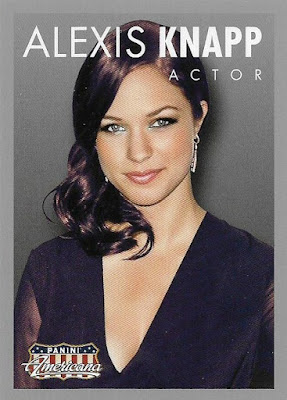 I didn't even care if I didn't know who the actor was. There is still plenty of that in Americana. People like Chris Jericho and Vanilla Ice and worse -- the ugly reality show characters that made you wish not only that you never turned on the show but that you never bought a television.

But I could even get past those cards because of the pretty faces. 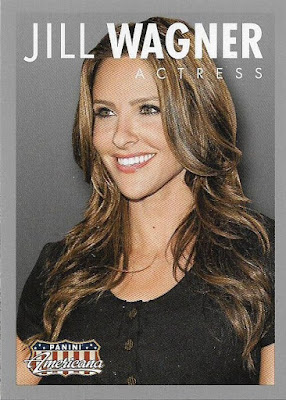 Now, as I was grabbing a pack here and there, I quickly realized that I was the only one doing this. The box sitting on the shelf at Target showed only the signs of me being there each time I returned. Two more packs missing -- the packs I bought the last time.

And, then, on Friday, when I returned, to maybe snag a pack of Heritage High Numbers (although why would I want to look at the 1966 design again?), I looked where the Panini Americana box was, and it wasn't there anymore.

I looked up and down over all the shelves. It had been removed. Gone forever. To wherever cards that don't sell go.

Of course, I'm completely suckered now. There's no going back. I've already added some cards from the set online (I'll be the worst guy in the world if my collection never has a Danica McKellar card). Target may not want to showcase pretty faces anymore, but there's other places for that. 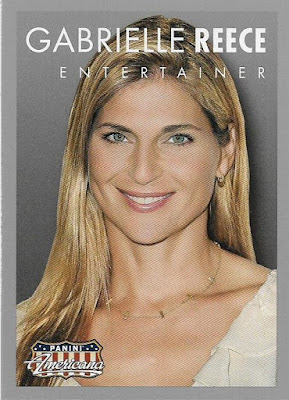 I don't expect this post to interest many regular readers. I know you're all about baseball or at the very least, sports.

But I decided awhile ago that I just can't have a collection that's 100 percent dudes in scripted pajamas.

There's got to be a pretty face in there, too.

And that's not Jose Canseco with his shirt off.

Tony L. said…
I like the novelty of having pretty girls on cards in my collection. My problem is that I don't really know how to, er, display those cards.
October 3, 2015 at 8:35 PM

Commishbob said…
I collect actresses on cards (and other paper memorabilia myself. And I always hear crickets when I post them.

I've bought some of the Panini stuff in the past and overall I agree with your assessment of them. And this set does look much better.

night owl said…
I think most Bond followers would agree with that. It's just that Connery was before my time and Moore was the guy around when I was following that stuff.
October 4, 2015 at 1:38 AM

Ryan G said…
I ended up with two boxes of the stuff; I posted about them before. The photos are good and it's a pretty plain design which I am on the fence about at times. It's uncluttered and mostly non-distracting. And I agree that for the non-hits the subject selection is pretty good. I'm trying to build the set too, though I don't have anything for trade (it's all back in the States, and I'm here in Japan). I really like the Americana releases. I wish there were more pop culture sets - wouldn't it be great to have a sort of yearly "review" set with the best movies, music, and TV shows, and the people who were a part of them?
October 4, 2015 at 5:09 AM

Anonymous said…
I've seen a couple of posts on this set, and I keep thinking I need to pick up a pack or two. I really like the design... for once, Panini went with "less is more". I'll look for them the next time I'm in Target, as long as they haven't gone to the same upstate farm (where they can run and play) as the packs in your Target.

Jill Wagner is an actress, but all of the other women are actors? I'm sure it's just an oversight, but kinda interesting.
October 4, 2015 at 9:02 AM

Twitch said…
The great thing about Bond (and to a broader, less focused, and more wildly varying quality extent extent, other long runners with multiple iterations of the same character, or similar archetypes, like Doctor Who, Gundam, Star Trek, and Power Rangers) is that, regardless of their movies' quality, each actor to portray him has brought something unique & valuable to the table that works well with the character. It's like, you can have your favorite, but it doesn't change the fact they're all good.