'56 of the month: Don Newcombe 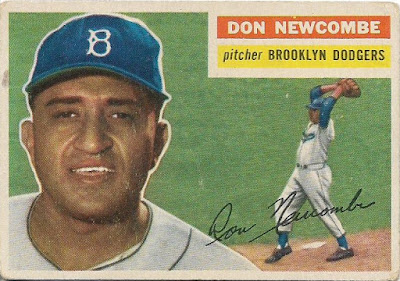 Since I've just finished proclaiming 1956 Topps as the greatest baseball set ever made, I figured I'd extend the '56 Topps love for at least one more post.

The Twitter folks were in a bunch because Padres pitcher Bud Norris said some things that were along the lines of: "foreigners, learn how to play the game right." You can see how some people might take that the wrong way.

Although I don't find Twitter's habit of unearthing something it disagrees with and then nailing the person who said it to the wall repeatedly for the next 8 hours charming, I do agree that the "play the game the right way" mantra is stodgy at best and xenophobic at worst. Most of the complaints are lodged by white players against players of color or players from another country.

Yeah, I don't like demonstrative displays on the baseball field all the time, but I've never had an issue with a bat flip, or staring at your home run for a long time, or celebrating a strikeout on the mound. Some people are more emotional than others, baseball is an emotional game, you keep that stuff inside of you, you're going to hurt yourself.

The complaints about Latin American players makes me wonder if we're going through what baseball went through in the '40s and '50s, when African-American players joined the major leagues. A number of teams took awhile to allow black players on their teams and it couldn't have been simply the color of their skin (although that had a lot to do with it). It probably also had to do with how some people perceived the behavior of black players.

This is why -- again -- I am so proud of my favorite team. The Dodgers could have stopped with Jackie Robinson breaking the color barrier and said, "there, a black player is in the major leagues. He's pretty good, right?"

And the year after that, Don Newcombe arrived on the team and became the first black pitcher to win Rookie of the Year honors.

That was just the start of the firsts for Newcombe.

He was the first black pitcher to face a black hitter (the Giants' Hank Thompson) in a major league game.

He was the first black pitcher to be a National League All-Star.

He was the first black pitcher to lead the league in strikeouts.

He was the first black pitcher to win 20 games. 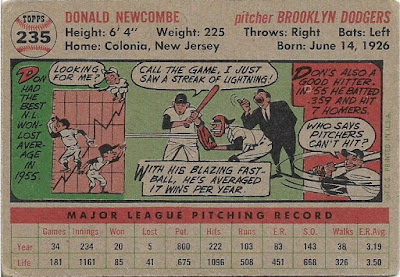 What Newcombe did, out there on the mound by himself, no doubt in the face of blatant racism, is amazing to me. Newcombe has always been a favorite of mine and I don't think he gets enough credit when people are looking back at players from the '50s.

Newcombe had a well-known problem with alcoholism. I've often wondered if the difficulty for a black man in the major leagues exacerbated his addiction. But everything I've read says that he had issues with alcohol even in the Negro Leagues. As for bigotry, Newcombe has said, "I never worried about racists. I could throw a pitch 100 miles an hour." So, good for him for rising above.

Newcombe got sober in the late '60s. For most of my life I've known Newcombe as a counselor for baseball players, someone who has used his history with alcoholism to help others in their struggles. I've admired him for that mission as well.

These players now that are being lectured about playing the game right way, the Yasiel Puigs, the Carlos Gomezes, you never know what will happen in their future. Maybe Puig will be a community leader, a respected teacher of young Cuban ball players struggling to find their way in a new culture. Then, won't you feel silly that you treated him as a know-nothing foreigner.

Bud Norris has apologized for his comments, saying they were misconstrued. I don't doubt that he really is sorry. Whether he's sincere, I don't know. I'm sure none of the Twitter people or bloggers have apologized for some of their out-of-line comments about Norris. They probably should.

But I understand why they're upset.

It's been almost 70 years since Robinson showed up in a Dodgers uniform. Seventy years.

Zippy Zappy said…
I believe the Norris quote is derived from another piece where one conducted a search on how many brawls in baseball today were initiated by a showdown between a white player and a Hispanic player, I haven't read it yet but I imagine it's pretty eye opening and yet unsurprising.

Your thoughts on whether or not we're going through what MLB went through in the 40's and 50's mirror my own. It's pretty clear we are though. I think it was just two or three years ago that an "unnamed" official in the Blue Jays organization said that there were "too many Latinos" on the Jays.

Still, the funniest part of this whole thing might be how the American public still seems to think baseball is an American sport when it's really European.
October 1, 2015 at 8:40 PM

Commishbob said…
I'm not going to say Newcombe belongs in the Hall of Fame but I've wondered why he got so little consideration.

Love that card. The cartoon is epic. I've been meaning to add his '61 MVP card to my collection. You've prompted me to go find one and I did.