I can do '90s cards, the biggie-size edition 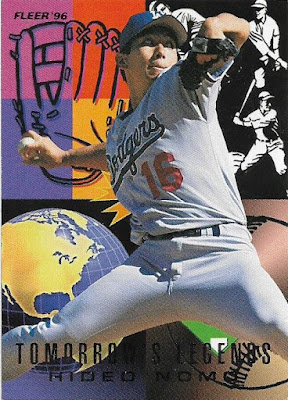 Although monster-sized portions have been around for decades, probably spurred on by the Big Gulp's arrival in 7-Elevens in 1980, the term "biggie size" or "super size" was invented in the early 1990s. And out-of-control portion sizes began in the '90s.

As much as people like to blame the '80s for crass consumerism -- "Greed is good," etc. -- the '90s did its share of damage on our wastelines and wallets as people overate, overextended and overcollected their way through the decade. There were more card sets than ever before during the '90s and a lot of collectors bailed because who could possibly collect them all?

It took years for us hobby dinosaurs from the '60s, '70s and '80s to realize you didn't really have to collect them all, just collect what you liked. And while I still have problems wrapping my head around that concept, it's getting easier every year. My bank account decides it for me.

But I still can throw myself at random sets, even random sets from the '90s. You don't think the Smoke n' Heat set from yesterday's post was the only one I've completed from 1996 Fleer do you?

No, for example, the Tomorrow's Legends Hideo Nomo card has always been a cool item in my collection. It is so busy that it harks back to the previous year of Fleer when card creators dropped acid in between stamping everything within view in gold foil.

But it's not the only Tomorrow's Legends card I own. 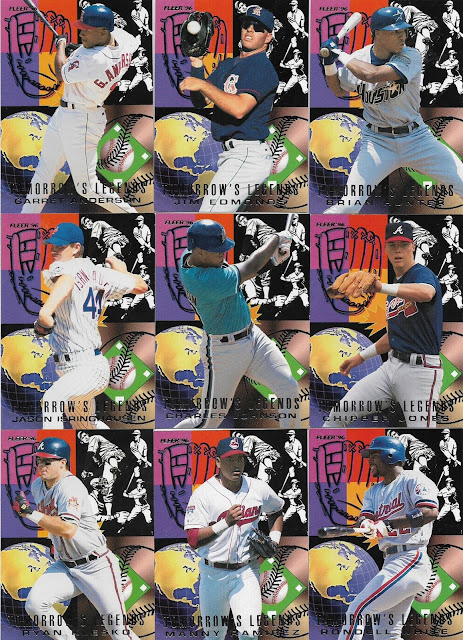 Now, I'm sure that just blew a gasket in your retinas and you can't possibly comprehend who you're looking at there, so I'll help you out. From left to right, starting at the top, it's:

Add Nomo to that, and that's a pretty good selection.

It's much better than the selection in another '96 Fleer insert set. 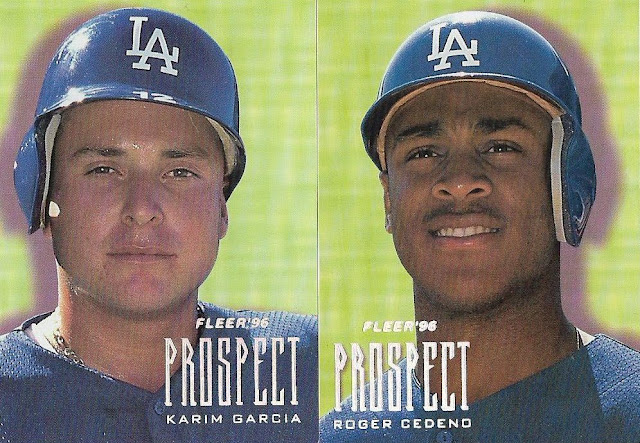 Fleer also foisted a prospects insert set on us because this was the '90s and that's what one did.

This was also a 10-card set and I've been plagued by flashbacks every time I look at these two cards in my collection. Neither did much for the Dodgers, yet I own many more cards of these two players than Dodgers who took my team to the World Series.

But I have the feeling that fans of other teams are plagued in a similar fashion because I happen to have the other eight cards from the set, too: 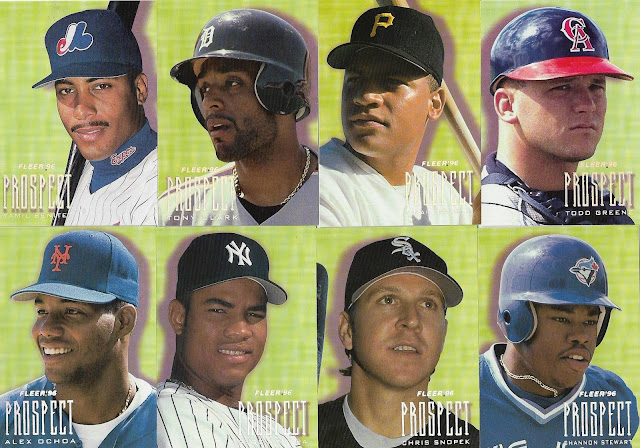 I know some of you don't want to relive some of these failures but I feel obligated to list them off for those who can't read foil.

Good god, how did prospecting survive past 1996?

Let's move on to a '96 Fleer insert set where people were being a little more productive. 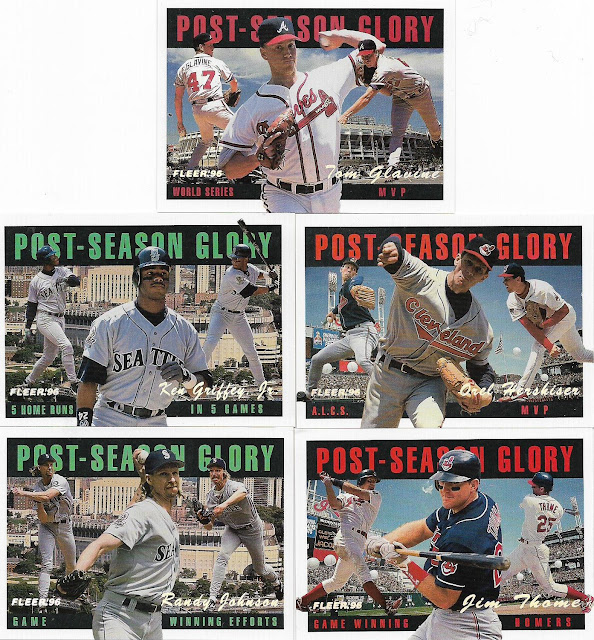 Here is a five-card insert set called Post-Season Glory that celebrates the 1995 successes of various teams in the postseason.

This set is heavy on Indians, Mariners and Braves, which automatically reminds me of the bad-old days of '90s postseasons. Throw in some Yankees and Marlins and I'll run sniveling back to the '80s when Hershiser was in his rightful place as a Dodger.

This is a pretty attractive set done in the usual "three images is better than one" style of the '90s. It's typical biggie-size behavior. Unfortunately, in my quest to find a night card for every World Series since 1971, this set fails because Glavine sports a daytime background.

But it's another '90s insert set complete.

You didn't know I had it in me, did you?

OK, steelehere helped me out on these ones, too.

The grand finale is coming up. And only some of it is from the '90s.

Brett Alan said…
Ouch, yeah, those "Tomorrow's Legends" cards hurt my eyes. (Like I don't have enough pain with the Mets having gone down 2-0!) And only two of those guys could remotely be considered "Legends"--MannyBManny and (loathe as I am to admit it) Chipper are, but no one else.
October 28, 2015 at 11:07 PM

GCA said…
I blindly grabbed a bunch of those Post-Season Glory singles from a dime box at a show, figuring I'd get a good percentage of whatever the set count was. What I got was a whole stack of the Glavine card. Anybody need one?
October 29, 2015 at 1:34 PM