Be careful what you wish for, part 2

October 08, 2015
Don't you hate sayings that end in prepositions? Is that only me? OK, onward.

Card blogs are full of wish lists. We call them "want lists," but they're really wish lists, and if the old saying is accurate, we really should be careful, whether we're wishing or wanting.

As an example, I present to you the Nebulous 9, which is propped up on the sidebar. That is kind of the ultimate wish list for me and it's quite effective. Perhaps, too effective sometimes. And thus begins the cautionary tale:

Not too long ago, I realized that while I had owned the 1972 Topps Maury Wills In Action card for years, it was tucked safely into my Dodgers binder and there was an empty spot in my '72 Topps binder.

So up on the Nebulous 9 it went.

It sat there for maybe a month or two and then I received an email from Mark of the blog My Best Friend Collects Chipper Jones. He said he had a few cards off my want list and he made special mention of the Maury Wills In Action card. "Cool," I thought. "I can finally cross that card off my list."

I should have placed the Wills card on the Nebulous 9 in capital letters to indicate that it was en route, but October is insanely busy what with every sport going on at once, work implementing its umpteenth new operating system, deer hitting cars, dogs getting sick, you know the drill. Besides, the card had been on the list for months without a sniff, so no problem, right?

You know where this is going.

Not long after Mark's email, I received a PWE unannounced from Mark Hoyle. He had a handful of cards for me. Here they are: 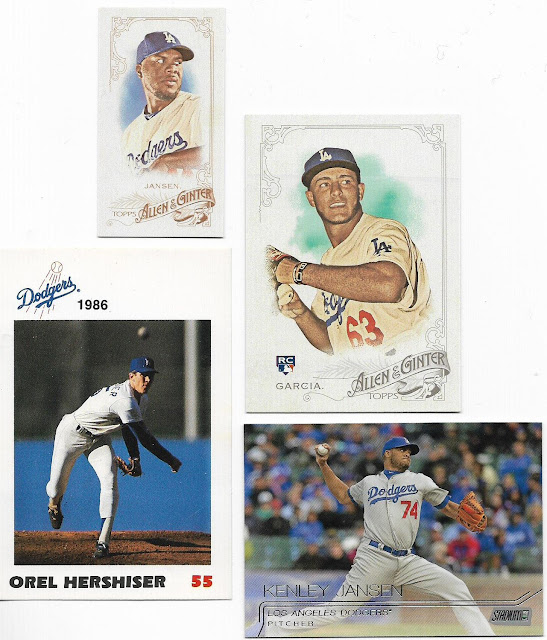 A lot of 2015 cards there, I know Mark doesn't do many modern cards, so this is very nice of him.

Oh, and there was one other card: 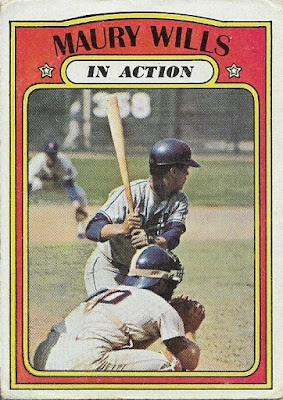 Oh, well, no harm done. I wouldn't mind an extra of this card. It will remind me of how generous collectors are.

I didn't think much of it and still looked forward to the original Mark's package.

Meanwhile, Keith -- who's commenting handle on here is "eggrocket" -- dropped me an email mentioning nice things about my blog and added that he had found something and thought of me. He would drop it in the mail.

How nice, I thought, and turned my attention to whatever Adult Form I had to fill out now.

The envelope arrived a few days ago, and out dropped a complimentary note, a top-loader and a card that was inside said top-loader. 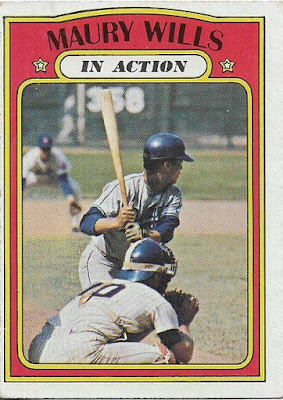 Well, this is a rather nice specimen of the Wills card. But it's clear I'm all good on the Maury Wills In Action card now. "Sorry, Chipper Jones Mark," I thought. "I think I'll get to erasing that Wills card off the Nebulous 9 list. I'll do that tomorrow. Got to go into work early for another round of training (makes gagging noise)."

Well, the next day -- the very next day -- Chipper Jones Mark's envelope shows up in the mail. 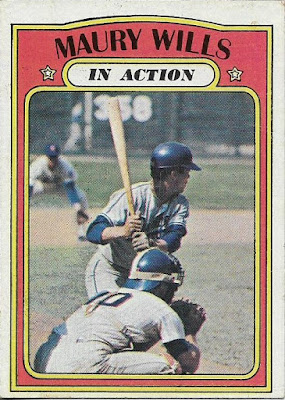 But Mark sent a bunch of Line Drive cards that pretty much has knocked out my Dodger needs from one of my favorite minor league sets (I must do a post on that someday). 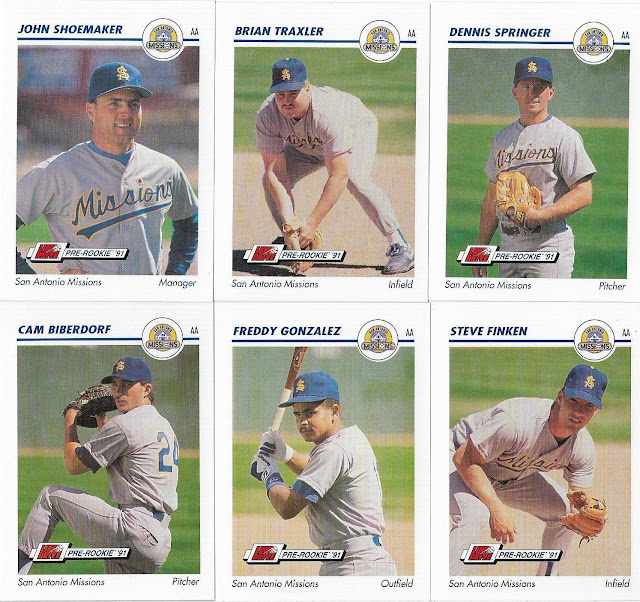 The Double A San Antonios. 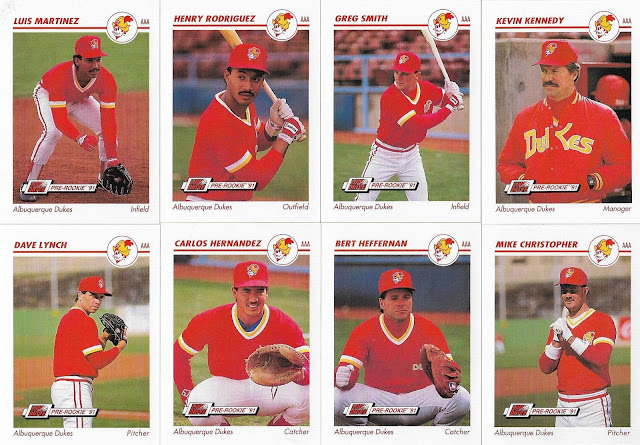 And the Triple A Albuquerques.

Just how I remember them.

But that's not the end of the story.

Chipper Mark's envelope was accompanied in the mailbox by another card envelope.

This one was from Dave, who is from Texas and has sent me cards before. He wanted to drop me a line and mention that he enjoyed the All-Time Topps countdown and say that he agreed with the choices. He also supplied a bar graph chart of my countdown. 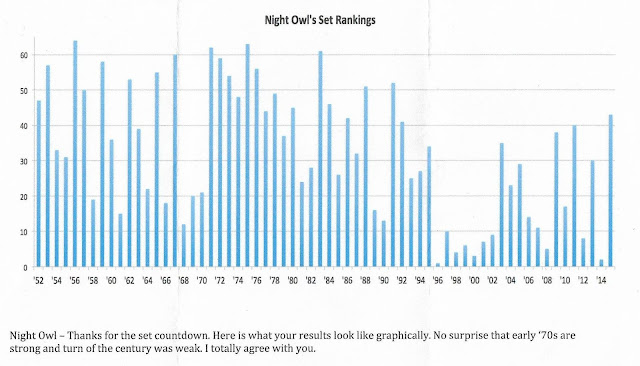 Great minds do think alike, Dave. Thanks for the visual.

Some '90s style parallels and a parallel from this year.

And there was one base card in the envelope, too. 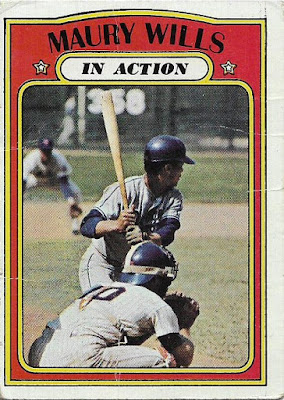 Anybody need a '72 Maury Wills In Action card?

I've got to trademark this Nebulous 9.

David said…
Haha. Sorry. I am glad that you got other cards that are in better shape. (My Wills card was a dupe that I totally did not need - if you toss it, the other three instantly become more rare!)
October 8, 2015 at 7:52 PM

Tony Burbs said…
If you have any further needs from the Line Drive set, I might able to help. I have a full box of that set sitting in my trade box
October 8, 2015 at 9:32 PM

Mike Matson said…
Jeez.. Wouldn't it be nice to have them all go like that.. lol
I know all about the wish list aspect. There is one set I want but I doubt I'll get it.. 1992 Nabisco, Since it was a Canadian issue, I don't really know how many of the original set are floating out there
October 8, 2015 at 10:01 PM

My Best Friend Collects Chipper Jones said…
Chipper Jones Mark is happy to help you out with your Line Drive needs. What are the chances that you could score four Maury Wills In Action cards. Thank you for sharing your recount of acquiring the Wills card. This is a nice story I will share with fellow collectors. Blogging is great way to make trades with those who appreciate cards.
October 9, 2015 at 2:24 AM

Billy Kingsley said…
That made me laugh out loud. My Top 10 wantlist has been up on Cardboard History for almost a year now and not a single card has been acquired off it. The perils of blogging about a topic that's not predominantly baseball I suppose!
October 9, 2015 at 6:59 AM

Brett Alan said…
Honestly, I was meaning for a while to go through my old cards and see if I had the Wills In Action...just as a thanks for a blog I enjoy. Usually when I put off doing something nice for someone, I regret it, but here I guess my conscience is clear! B^)
October 9, 2015 at 3:45 PM