The joy of Eck 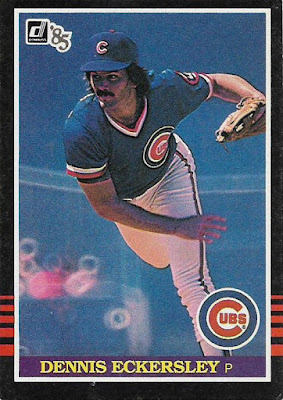 Twenty-seven years ago today, the Dodgers won their most recent World Series title. It wasn't a forgone conclusion that they would win when Kirk Gibson hit that home run against Dennis Eckersley in Game 1. But I think it gave L.A. a significant boost, considering they were pegged as large underdogs to the A's going into the Series.

In years past, I've remembered the Dodgers side of things in that game, for obvious reasons. But today I want to focus on the man who gave up that home run, Dennis Eckersley.

I felt a little bad for Eckersley when he surrendered that homer. See, I've always liked Eck and heaven knows there are plenty of pitchers that I would have rather seen give up that home run.

Eckersley started the first Red Sox game I ever saw at Fenway Park. The first time I heard of him was when Boston acquired Eckersley from the Indians during spring training of 1978 for Rick Wise and a bunch of Boston prospects.

But I knew Eckersley the most from his baseball cards. 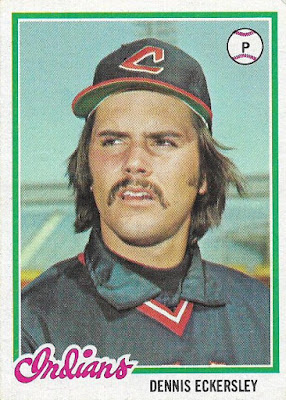 Here is the first Eckersley card I ever saw. Eck didn't begin with a mustache -- he doesn't have one on his 1976 and 1977 Topps cards -- but from this point forward he had one. The problem with this photo -- as dearly as I love my mustachioed players from the '70s -- is that he comes off as a little angry. I didn't like this card when I was a kid. It made me a little scared inside.

No, Eckersley's look was made for action. And he has some of the greatest action cards for a pitcher that I've ever known. 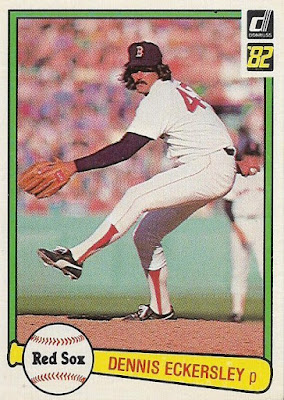 Eck's wind-up is definitely old-school in that it's dominated by arms and legs flying free and easy. You saw everything when Eckersley pitched. One arm this way and one arm that way. A leg kicked high and a ball waving over his head. It made for glorious cardboard. 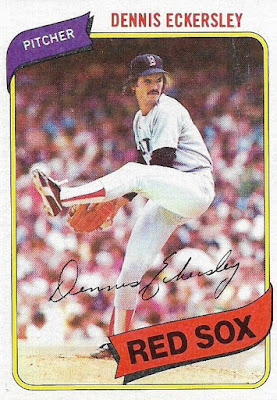 Add that wind-up to the flowing locks and Snidely Whiplash mustache and I don't know why the world isn't filled with Eckersley collectors. They are some of the most pleasing cards of the '80s and early '90s. 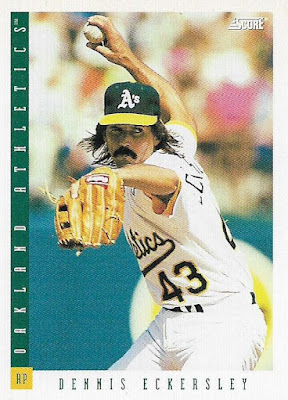 Shots like this are just stellar. I like my pitchers to act as if they're gunslingers, and I don't know any other pitcher who played the part better than Eck. Right eye half-closed, left eye glaring. The ball so blatantly there. Yet few hitters could touch it.

It made me wonder why Eckersley was ever featured in a static pose. 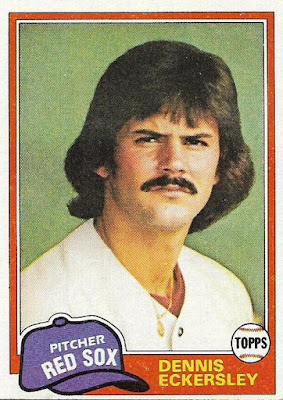 OK, sure, yeah, if you're going to have anyone go capless, get a shot of Eckersley's Barbie's Styling Head hairdo, but then go right back to the action. 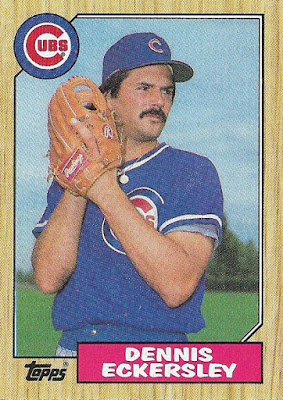 To me, this is a waste. And then Topps went back and duplicated this very card for its 60 Years of Topps insert set in 2011. Terrible choice. 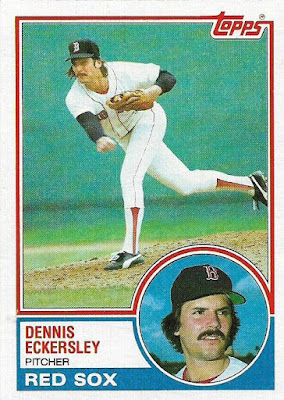 This would have been a much better choice. That's my gun-slinging Eck. 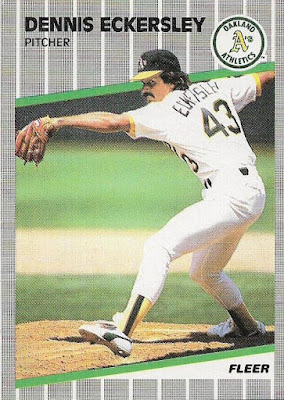 I'm a little particular about my Eckersley action shots, too. For example, I love the wingspan look here, but you can't be cutting off one of the arms. 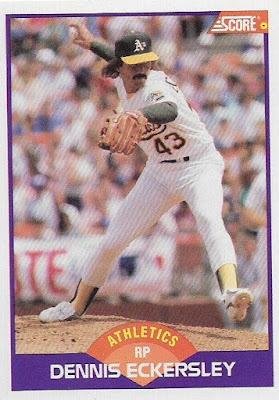 This is different, but I can't see his glare under the bill of his cap. 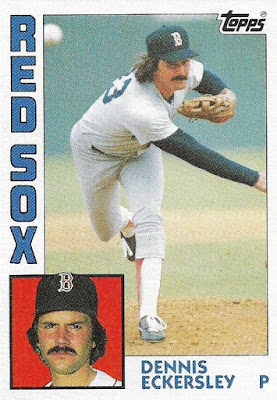 Pretty good. Eckersley requires plenty of room to roam and this is a little confined. But I like the ball spinning its way to the plate. 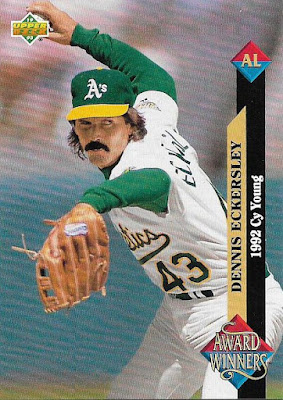 But these are the best Eck cards. Bad-ass pitching is the best.

Eckersley, of course, is in the Hall of Fame. People now know him for that Gibson home run and his pregame/postgame show commentary, his drinking problems in the '80s and his famous switch to the bullpen.

But people should know him for his cards, too. They're really consistently some of the best produced by any one player during the lifetime of his career.

And I'm not just saying that because he helped the Dodgers win it all in '88.

arpsmith said…
I totally agree with you, Eck has some great cards. And I think your favorite moment of Eck all time is probably my worst.
October 21, 2015 at 12:58 AM

GCA said…
At least you didn't show the Stadium Club card of him and the mascot guy with the Volkswagen-size head. I don't mind the Nats' presidents as much, because they're a little cartoonish, but if it's a real person, then it kinda childhood nightmare creepy...
October 21, 2015 at 9:29 AM

Cardboard Jones said…
I never thought about it before, but you're absolutely right on this.
October 21, 2015 at 10:13 AM

Adam said…
I've always been a fan of Eck since I was a kid. Just something about that wacky windup and the unique look that made me think "man, this guy is cool!". He's also one of the few players outside of Reds players I actively try to collect because, as you mentioned throughout this entire piece, the guy has some really unique cards.
October 22, 2015 at 12:24 AM