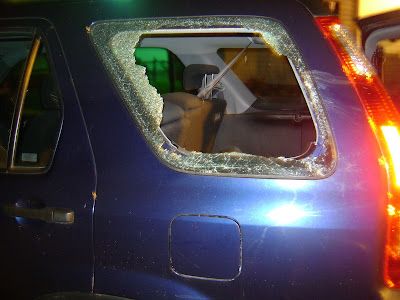 It's interesting how a card show can color your entire day.

Last night, while driving the busiest road in the entire town, the back end of my vehicle was hit by a deer. Despite the jolt, everyone inside was OK, and except for a shattered back window and some other minor damage, the car made it back home. You know the rest: fun with forms and claims and repairs.

But, you know what? None of it really bothered me. Because earlier in the day I had gone to a card show. Everything after that was la-di-da. If you were to do medical research on card show attendees, you'd probably find their dopamine release rates off the charts.

As for the card show itself, I can't say it was the most exciting venture. That's kind of a disappointment because I'm probably not going to get to another show for six months. But that's what happens when you're a set collector and you have to bite the bullet.

You know what I mean if you collect vintage sets. Just about every one of those sets has a card, or several cards, that cost a good amount of money. And if you're anything like me, you don't have much money, so you usually leave cards like that for last while you accumulate a bunch of commons. And then you try to trick yourself into thinking that you had a great show. Look at the quantity! I brought home 120 cards today!

But those high-ticket items are still staring at you, hovering. They're saying: "you're going to have to bite the bullet someday."

Well, Sunday was that day.

With not a lot of money and determined to knock off some more cards from 1972 Topps high numbers, I went straight to the table that had them and started pulling cards. 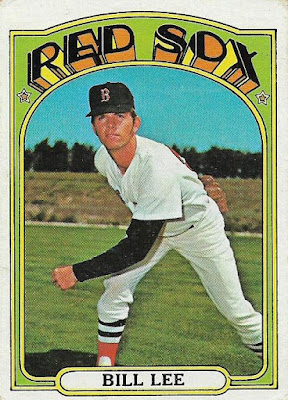 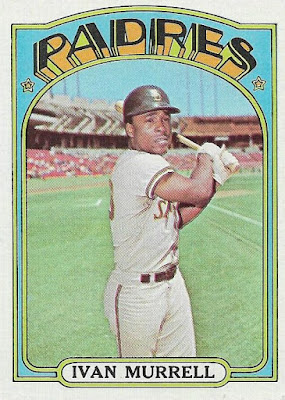 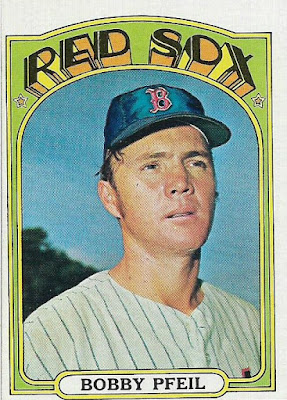 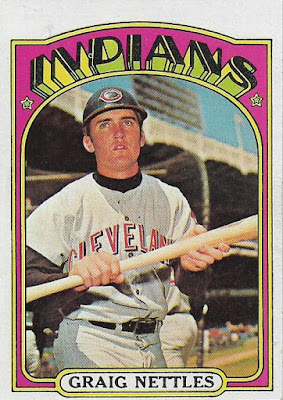 #590 - Puff. This replaces my very mangled version of this card. 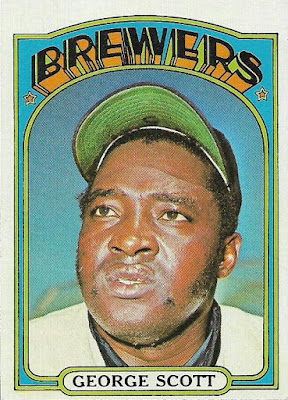 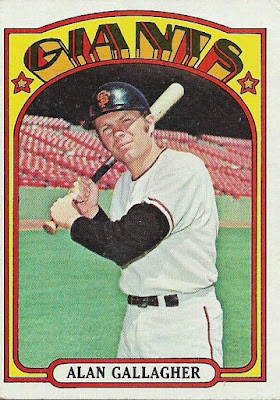 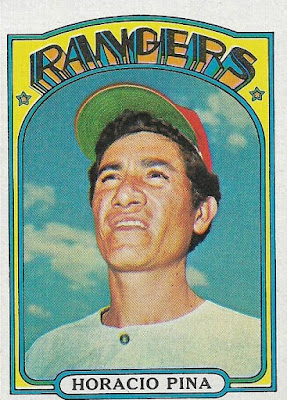 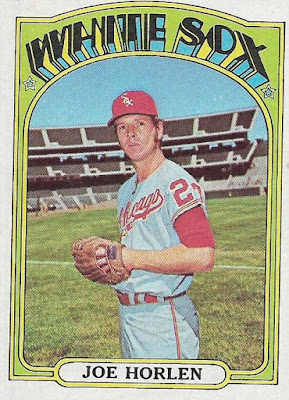 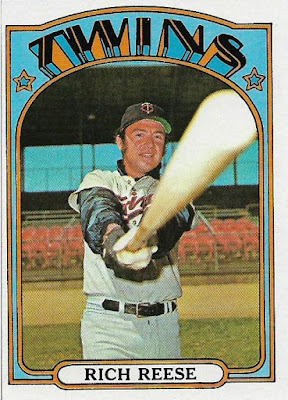 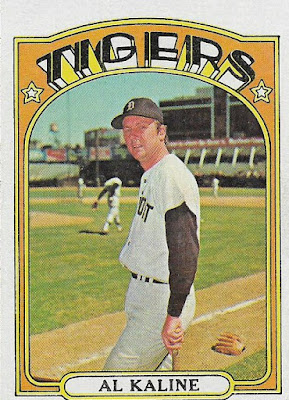 I got a little bit of a deal on this card, but nothing like Dimebox Nick in his magical flea market world. I don't live in cardboard nirvana, so I handed over my dollars.

At that point, I decided I better look at some other interests, maybe pick up some random 1956 Topps needs.

So I went over to that binder and started pulling cards of Topps' greatest set. Minnie Minoso and Larry Doby and Eddie Miksis and Andy Seminick.

But something didn't feel right. And the more I pulled the '56s, the more I felt like that wasn't what I should be doing. I wasn't biting the bullet. I was merely accumulating because landing a LOT of cards felt better than traveling one hour and coming back with only a handful.

Then I flipped open the '72 binder, not to the high numbers, but to the middle of the set.

And I pulled out one card. 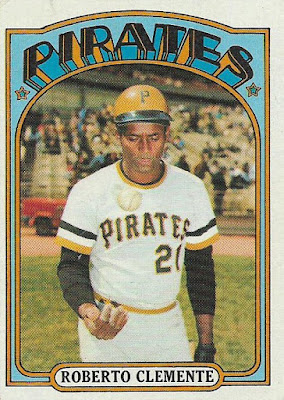 Good thing I was reimbursed for gas mileage three days earlier. That paid for this card.

This is easily Clemente's best card, and I am always equating it with his last card, even though his last card is in the 1973 Topps set. This just seems like it should be his last card.

This was biting the bullet. This felt like what I should be doing.

Since I didn't have the cash for those '56s anymore, I returned them to their proper spots and paid my money for a tiny stack of 11 cards.

With not much money left, and every discount box I saw dominated by dudes who thought nothing of standing over the box for an hour, I decided to get some pages for my unusually shaped cards. I desperately need some four-pocket, eight-pocket and 12-pocket pages.

But I couldn't buy just a few pages of each, they wanted me to get a full box. I don't need a full box of four-pocket pages, so I had a little bit of money left for a few cards after all.

Blocked from discount boxes at every turn, I finally spied a sign that said "blowout prices, everything in the box $1 each." This is the best I could find in non-dime box land, and I saw a sign that said Dodgers rookies, so I started pulling. 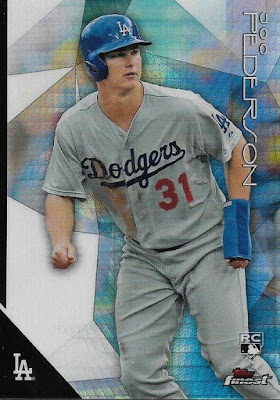 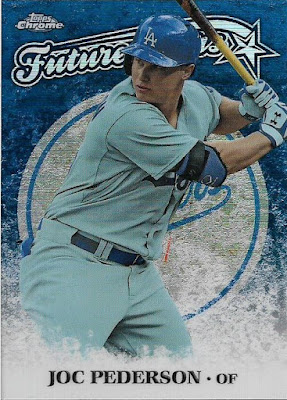 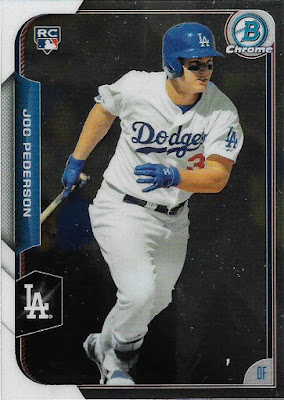 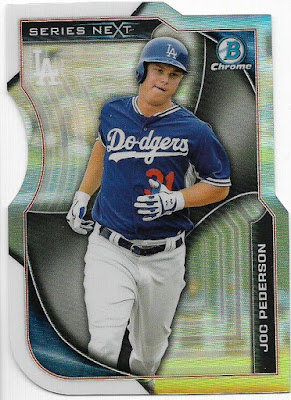 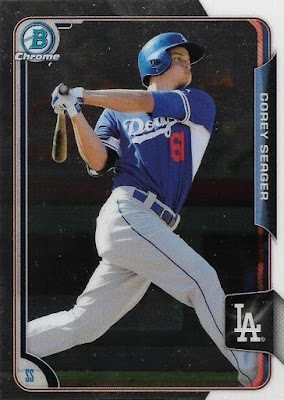 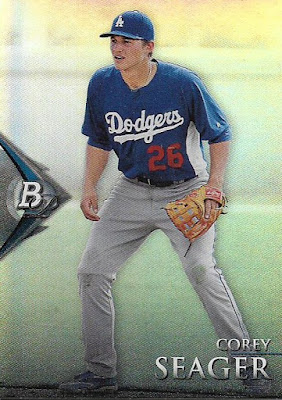 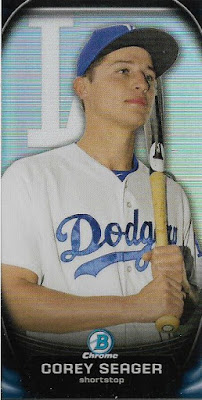 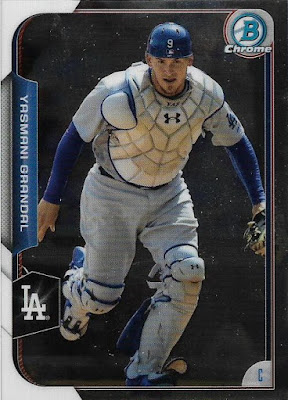 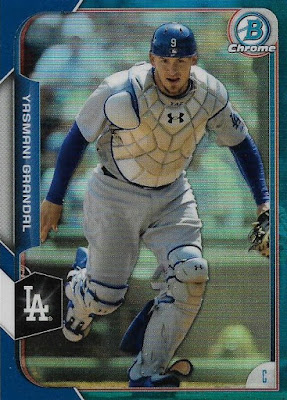 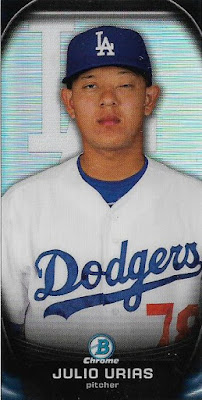 OK, Yasmani Grandal is not a Dodger rookie. But I was so happy to find Joc Pederson and Corey Seager cards from products that I had not even seen in person (2015 Finest and Bowman Chrome for example) that I grabbed those, too.

Those Seager and Urias Bowman Chrome inserts are interesting. Kind of a cross between tall boys and A&G minis.

And that was the end of my card show.

I probably wasn't there for more than an hour, which always seems like not enough time for me. But I just can't browse when I have no money. That goes for cards, clothes, anything.

It'll probably be like this until I finish the 1972 Topps set, but really that's OK.

Because I was at a card show.

Jeff Jones said…
Those tall boys are sweet but I'd be happy too driving home with that beautiful Clemente, looks pristine
October 5, 2015 at 8:16 PM

Zippy Zappy said…
That Clemente is pretty sweet. And at the very least it helped you not think of the broken window as anything more than a mild inconvenience.

Although I will have to prove your hypothesis wrong, I'm usually disappointed and underwhelmed when I leave a card show.
October 6, 2015 at 12:08 AM

Angus said…
If the fairgrounds show had been on a Saturday I probably would have made the trip. However, with it being on a Sunday I didn't want to miss any football.

Glad you had a successful show, and sorry to hear about the car, and glad everyone inside was alright.

That Clemente is sweet, but the Spaceman has a place in my childhood after seeing him pitch for the Expos and hearing all the odd stories about him.
October 6, 2015 at 2:00 AM