October 17, 2015
(Today is "No Beard Day," which I think explains why Dallas Keuchel is no longer in the postseason. Think about that ball players, when you grow a playoff beard. Time for Cardboard Appreciation. This is the 233rd in a series): 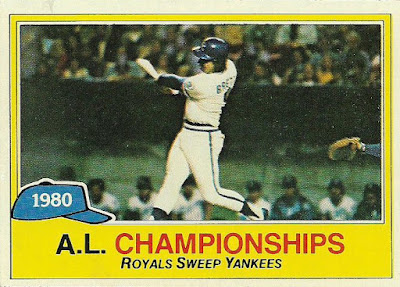 I have almost no time for the other half of this blog -- namely sending out card packages.

I keep meaning to send out cards and actually set aside space in my mind for when the next day off arrives, but something always comes up on that day off -- an unexpected work call, the increasing demands of a teenager with a job, technological breakdowns, and, now, the postseason.

I think maybe everyone else is the same way, because I can't remember the last time I went an entire week without cards arriving in the mail, which is what happened this past week. Who has time for the post office? There's a game on at noon! And then one at 4! And then one at 8! It's work, baseball, sleep, and maybe fit a meal in there somewhere.

Then there's the emotion mixed up in it all. When the Dodgers were eliminated on Thursday, I didn't want to do anything. I was at work, and as usual, I had to exclaim the Mets' victory in the paper for all to see. The bigger the headline the better. This is New York and we're "supposed" to like New York teams, right?

I didn't like it. I think I get sadder by the season when the Dodgers are done for the year. And when you're sad, you don't want to do much. You complete what's required of you and the rest goes by the wayside.

It's a couple of days later and I've begun to get my baseball feeling back. It won't be the same as it was a week earlier, but at least I can find a rooting interest here.

George Brett's majestic home run against Rich Gossage in the 1980 ALCS is one of the major baseball-viewing images of my life and it cemented my allegiance to that midwestern team. It's why I enjoy this card so much (and need a second one for the Night Card binder).

There isn't a lot of recognition of the LCS on baseball cards. Much of the postseason love goes to the World Series. That's too bad because as we've all heard, the LCS is often more exciting than the World Series.

I'm counting on that this time around, too. And I hope the Royals come out on top. I hope they rip whatever narrative the national media has for the Cubs or the Mets to shreds.

Hopefully, while I'm watching the festivities, I can put together some card packages at the same time.

With so many baseball card collectors whose teams are now out of the postseason, we could all use some cards as a pick-me-up.