January 24, 2014
(Welcome to the frozen tundra. Today's temperature has reached 18 degrees. That's the highest it's been in a week. The average morning temperature has been 23 below. This comes after three feet of snow in 24 hours two weeks ago and an ice storm that almost canceled Christmas. Also, snow could call off my card shop trip this weekend. Baseball ain't never coming back. Time for Cardboard Appreciation. This is the 197th in a series): 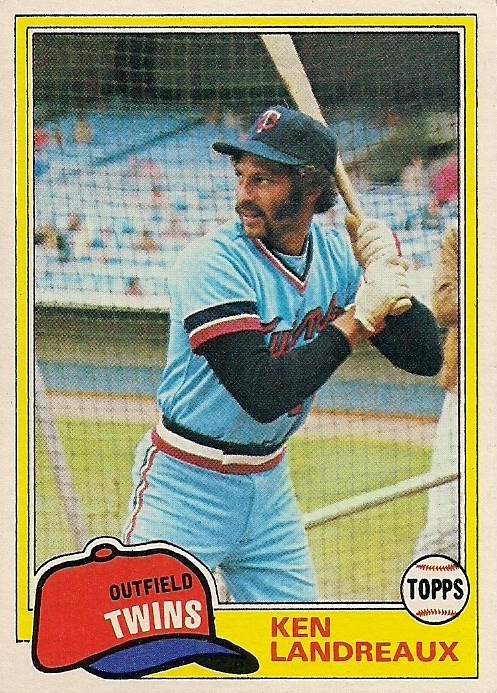 I was looking through baseballcardpedia.com the other night, working on a blog project for some point in the future.

I was scrolling through the 1981 Topps checklist and noting some of the mistakes made typing in the checklist. Baseballcardpedia.com is very useful tool, but I've got to figure out how I can get on there to edit. I can fix some of those name typos in five minutes.

When I got to Ken Landreaux's name in the checklist, there in parentheses next to his name was this notation: "Keith Olbermann's right leg can be seen in the background."

I don't know how I missed news of Olbermann's tan jacket and white pants showing up on Landreaux's card. But after some minor research, there it was both on Beckett and the blogs. It seems the journeyman TV commentator signed cards back in 2011 saying that he appeared on Landreaux's card.

I have no reason to doubt Olbermann on this. Sure someone could lie, but about this? I'll take his word for it, even though I'd love to hear what the situation was that allowed him to be behind the batting cage at what appears to be Yankee Stadium while Landreaux was taking cuts.

What I'd like to ask though is why do the celebrities always get special mention? There are thousands upon thousands of non-baseball-playing people who have shown up on baseball cards over the decades and they just keep right on being anonymous.

I think it would be cool if we could determine who those people were and put them in future checklists. For example, this card: 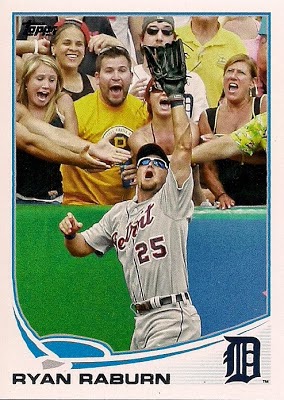 Who are these people?

Wouldn't it be great if the 2013 Topps checklist said: "#330 - Ryan Raburn (in the stands, from left to right, Esmeralda Jones, Bertha Tremont, Biff Lazore, Augustus Thomas, Velma Ruiz and Larrisa Wharp)"? At the very least it would prevent someone like me from making up weird names for people on baseball cards.

Of course, I don't expect that to happen any time soon. I guess your image is celebrity enough, even if you are nameless.

I'm speaking from experience, of course. 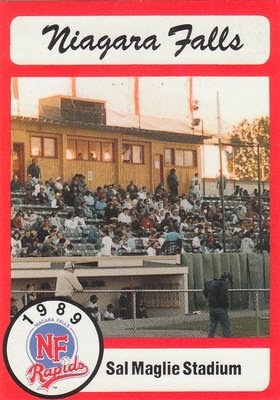 As mentioned before, that's me on a baseball card. I'm up in the press box, the first shadowy figure that you see on the left.

In fact, I can identify all three people in that press box: night owl, Paul Palumbo and Howard Simon.

Doesn't it feel good to be able to attach names to faces?

Hey! Maybe I should be signing this card. I know my jacket and pants didn't show up on a baseball card, but my face did. Even if you can barely see it.

petethan said…
Holy Crap. I almost bought that Sal Maglie Stadium card on a whim when I was searching for Maglie cards on COMC. I'll have to toss it in the basket next time (if there isn't a run on Night Owl cards before then).
January 24, 2014 at 8:05 PM

Jamie Meyers said…
I go to many New Britain Rock Cats' games and often sit behind the third base dugout, but the guy who takes the shots for the cards is also on that side, or they shoot a day game early in the season and I'm working then. I am, however, pictured in some guy's blog -- he was doing a minor league stadium tour and went there, took a bunch of pictures and posted on his experience. My knees were on ESPN, or at least their website. I and several other autograph collectors were recruited to be random fans in a Kenny Mayne sketch they shot there. Being on an actual card, though, is VERY cool. Freakin' cold here in CT as well, but not like you're getting.
January 24, 2014 at 9:44 PM

defgav said…
I hate to admit it, but I've had a blog post idea for an informative list of "most attractive female in the background of a baseball card". But that might be construed as disrespectful to women. And I don't really have enough cards, especially modern, to feel like I could come up with a decent list. But I will patiently wait for someone else (some rude, sexist brute) to create such a list.
January 24, 2014 at 11:44 PM