Is this dumb or am I just confused? 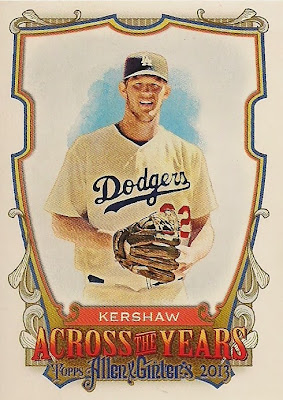 I was a good little shopper yesterday and spent the two Target gift cards I received for Christmas. I was gifted with all the clothes I could ever want and since the rest of Target is nonstop decorations that meant only one thing ... CARDS!

The card area is a disaster at this time of year with very little worth obtaining. If Panini would wise up enough to put one of its few decent baseball products in retail I would have grabbed some of that. But instead I decided to make a reasonable dent in my sixth quest to complete Allen & Ginter and bought two blasters.

The boxes did exactly as intended -- give me a respectable amount of base cards with very few dupes. I might actually be ready to put up a want list someday. I didn't get any "hits," which is fine because relics almost bore me now and I don't like the look of the A&G relics this year anyway.

I also received a couple of key Dodger wants such as the Kershaw Across The Years insert and a couple of minis. I didn't even have this one on my want list. I hate when that happens. But welcome, Paco.

The minis, of course, were the star of the show. A number of them will be headed to the frankenset binder, including an Andre Ethier dupe.

This one is a no-brainer: 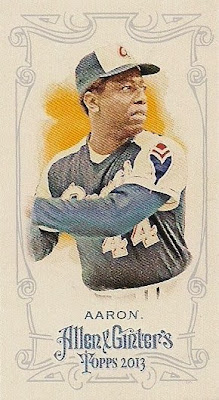 I also pulled both of these, one from each blaster: 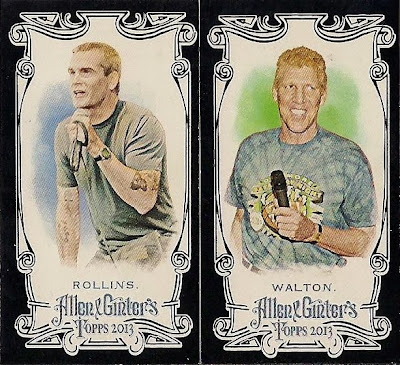 I think that takes care of the hipster crowd.

Both of these are headed to the frankenset binder, too. But before I send them off I wanted to mention one thing.

I turned the Walton card over and noted that it was card No. 350. I have another Walton card from the set that is card No. 100, but this didn't surprise me because I remember hearing about there being two Waltons way back when the set was first released (I didn't pay much attention to it, which is a theme that will pop up on this post more than once).

I assumed that one of the Waltons was some super short-print that shared its card number with a base card in the set. But, no, it turns out the No. 350 Walton is just a regular SP listed in the base set.

This is the SP Walton (black-border version): 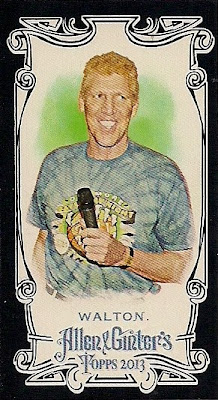 And this is the non-SP Walton: 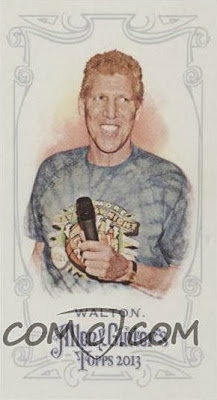 As you can tell, the only difference between the two cards (outside of me showing the black border one), is that the SP features a green splotch behind Walton and the non-SP has a red splotch.

So it's just two Bill Waltons in the base set. With basically the same photo. Odd.

But a lot of you know that already. Because you were paying attention.

You probably also know that Henry Rollins has two cards in the 350-card set. 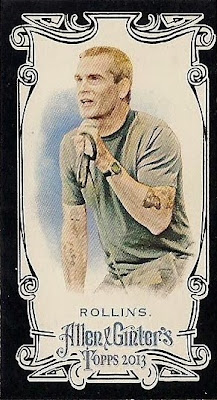 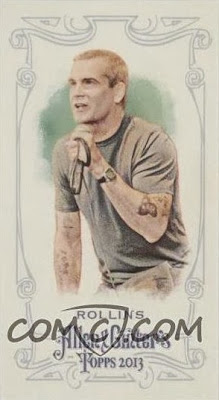 But there's an SP version, which is card No. 348 in the set. The SP has a green splotch while the non-SP has a blue splotch.

You also probably know there are two cards of golfer Jason Dufner in the 1-350 set. 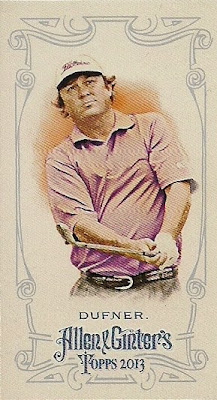 I happen to have the SP card, #349 (I hope I'm not throwing anyone off by showing just the mini cards. What goes for the minis also goes for the regular-sized base set). 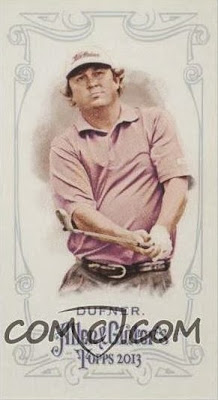 And there's a card of Dufner at #243, too. The base version features a purple splotch behind him while the SP card features an orangey splotch. 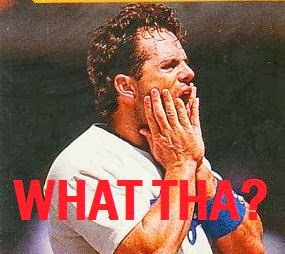 Now I've heard speculation that this might have to do with the annual Crack-the-Code contest in A&G. Again, I'm not paying attention, so I don't know if that's the case or even if these cards were set up this way simply to throw people off.

What I don't understand is why no one has squawked about this yet.

I know we set-collectors are a dying breed and you can tinker and experiment on us all you want because really what are the little mice in the cages gonna do? BUT I DON'T WANT THE SAME CARD IN MY BASE SET. YOU'RE PUTTING DOUBLES IN MY BASE SET!!!

Did I miss something?

Am I missing something?

This is so dumb.

I don't know if it's quite as dumb as numbering your sets with letters -- my other issue with A&G this year -- but it's really a head-scratcher. Even if it helps someone crack the code, you don't play with the base set.

But I suppose now you know why I don't try to complete modern sets very often anymore.

Red Cardboard said…
The Panini USA set has two Griffeys with different numbers and the EXACT SAME front AND back. I assume there are other players in the set with the same deal. At least you got some splotch variations here.
January 4, 2014 at 8:16 PM

Swing And A Pop-up said…
This is all news to me. Most everything is news to me. I am extremely efficient with my not paying attention skills.
January 4, 2014 at 8:47 PM

Nick said…
That's two more slots than Henry Rollins deserves to have in any checklist.
January 5, 2014 at 2:53 AM

Anonymous said…
Right now, I'm amusing myself by thinking of a Topps Consumer Relations Specialist grabbing you by the shirt, shaking you and yelling in your face, "It's fun! It's quirky, goddamn it, it's QUIRKY!!!!!"

jacobmrley said…
Maybe Topps had to fill spots in their checklist due to not being able to clear the likenesses of their original choices? The Ginter checklist usually comes early with a lot of TBA slots so maybe when they had empty spots, Topps (shockingly) took the lazy way out and just made SP versions of cards they already had mocked up. I am just thinking out loud here, but I imagine the explanation is something close to this.
January 5, 2014 at 9:26 AM

night owl said…
I actually meant to speculate that this was what happened but then forgot to include it. That might be it.
January 5, 2014 at 10:47 AM

TheRealDFG said…
I was going to say basically the same thing jacobmrley said...Topps does these things so far in advance that they overestimate what they can and can't get away with. (I'm pretty sure all the companies do it.)
January 5, 2014 at 12:42 PM

AdamE said…
I like that they are using letters on inserts. Why because I decided long ago not to collect cards with letters on the back instead of numbers. This means that I don't feel compelled to track down any insert sets.
January 5, 2014 at 6:38 PM