The card after: ramblin, gamblin man

This is the second edition of "The Card After," which is my attempt to shed light on a player's card that came after one that made him a card icon. For example, the first card I featured was the 1989 Fleer Billy Ripken "fuck face" card (I don't understand why people call it "rick face"). And then I showed the 1990 Fleer Billy Ripken card -- "the card after" -- because even 1990 Fleer deserves love sometimes.

That's basically the whole exercise. A little love for the overlooked. And to make you forget nuclear war (you'll have to read the Ripken post if you're confused).

Tonight we have an iconic card that you all know and love. Let's begin. Why it's iconic: It's one of the most comical cards of all-time. The '76 Traded set isn't exactly hard to find but they were randomly inserted in later versions of the set that year and may not have been as readily seen as the base cards. That produced something of a "what is THIS?" feeling when pulling the Traded cards. Aside from that, Gamble is goofily airbrushed into a Yankees cap and barbershop cape. All of this is happening while Gamble's Afro was at its most prominent stage. The card isn't rare, but fans of the '70s love it like no other and it's well worth the 5 or 6 bucks to add one to the collection.

That "nuclear moment": I think it was when baseball card blogs began. Gamble's traded likeness started popping up everywhere between 2006-09 and hasn't stopped since.

This card's impact today: For many people -- I haven't decided if those "people" are those who lived through the '70s or those who don't remember it -- this card symbolizes the decade above any other. In a decade of questionable hair, clothes, artistry and newspaper headlines, this card has it all.

This card's impact today, Part 2: Someday I am doing a post devoted to sets that use the newspaper theme. This is one of the most-often cited examples.

Something about this card that I think no one else has ever said: The card number on the back is "74T," which is also my shorthand for 1974 Topps, which featured the first traded set. I know I'm the only one who thinks that's cool, but there it is. 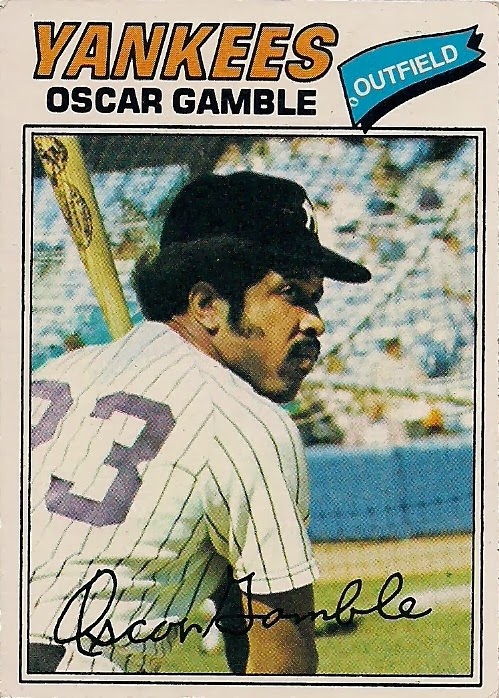 Why it's not iconic: The 1977 set, although greatly respected and admired by someone like me who was 11 at the time, is less-than-memorable. And although Yankees fans no doubt were eager to see Gamble's first card in a true Yankee uniform, it's not as spectacular of a card as Gamble's immediately preceding trifecta: 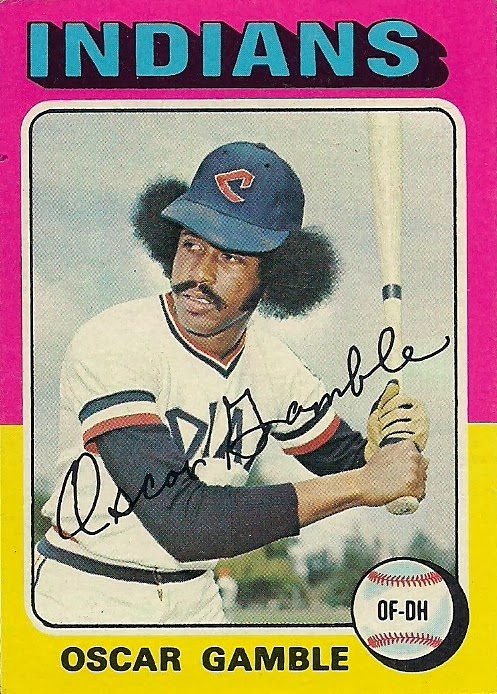 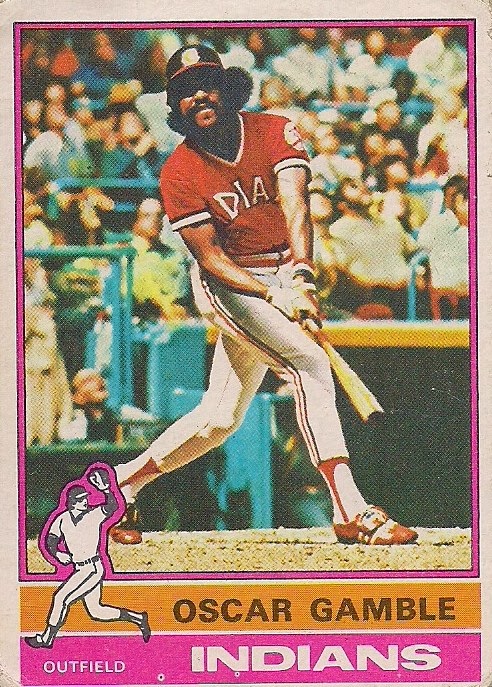 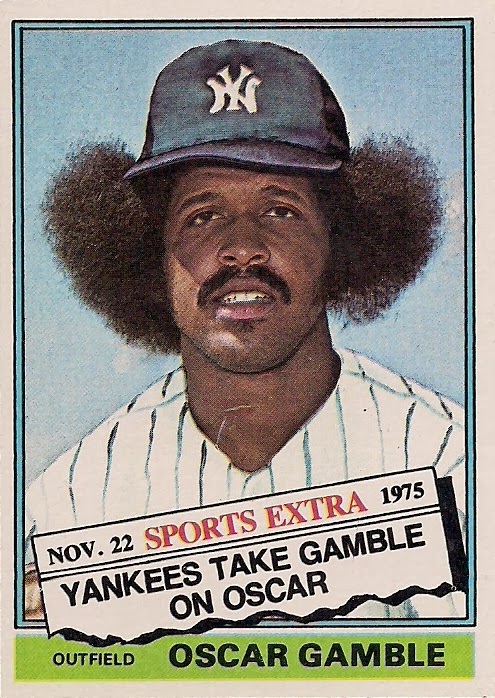 Part of this is because of the understated 1977 Topps design and another part of is because Gamble was a member of the Yankees and Yankee rules ban hair fun. So Gamble's fro was toned down. Fortunately, Topps chose a profile view of Gamble to showcase his still-remaining sideburns. But as a whole, it's a lot less flashy than previous Gamble cards.

What Topps was doing here: I don't think they were "doing" anything. The '70s wasn't a time for being ironic and self-aware on baseball cards. That didn't really start until the '80s.

What Topps probably also did: Took a photo of Gamble hatless in case he changed teams again -- which did happen, but Topps went with the airbrushed cap again in 1978.

Something I can say about this card to make it interesting: It's not a bad shot as I appreciate the park stretching beyond Gamble in the background, as if you are wondering where Gamble is gazing. I'm hoping that's the reason Gamble's image isn't centered, anyway.

It's a somewhat memorable card as Gamble's first Topps card in a real Yankee uniform. But it doesn't scream "1970s."

madding said…
I think Beckett is responsible for the "Rick Face" designation. I remember them listing the error card as such soon after it was discovered. No idea why. I thought it was hilarious as a 13 year old.
January 7, 2014 at 8:48 PM