January 15, 2014
(A couple of public service announcements today. First, Jaybarkerfan's Junk is running the third annual Blogger of the Year Awards. You can vote, if you're into that. Second, View From the Skybox is holding a box break with the best of intentions -- it's for charity. So check it out. OK, time for Cardboard Appreciation. This is the 196th in a series): 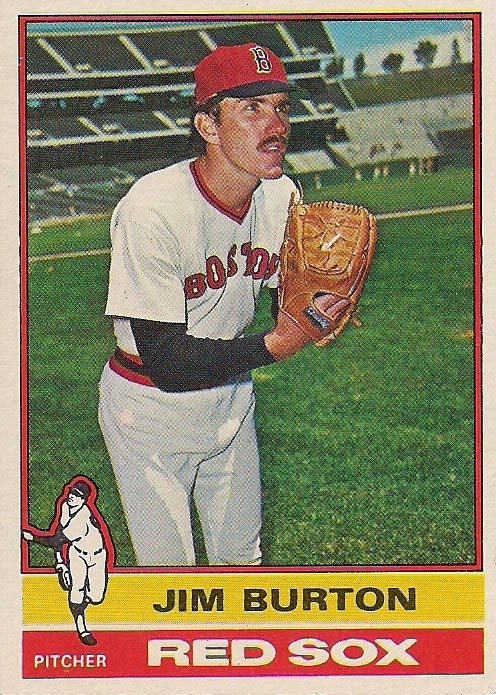 I don't see a lot of card bloggers write about their brothers (or sisters) and their card collecting experiences. I suppose I know why that is. In many ways both blogging and card collecting are solitary experiences, meant to highlight "me" and not "they."

I paid a great deal of attention to what cards my brothers pulled and which ones they favored. This was never more the case than in 1976, the second year I collected cards. After the introductory year of collecting in '75, I think 1976 was the year my brother and I became aware of what we were actually doing. We were collecting pictures of other people, who played baseball. Wasn't that weird? Our references toward cards and our collecting habits became more self-aware, irreverent and even sarcastic.

My brother's favorite team was and is the Red Sox. And the first Red Sox card he pulled when the '76 Topps set came out was Jim Burton. This was the year after the Red Sox went to the World Series and he could have pulled any number of stars: Yaz, Carlton Fisk, Jim Rice, Freddy Lynn, Dewey Evans, Luis Tiant, Bill Lee. Rico.

But, no, Jim Burton.

We weren't of the age that we would follow baseball on TV, so we had no idea that Burton gave up the winning hit in Game 7 of the World Series the previous season. We just knew what we saw on the front and back of his baseball card. And the back said Burton pitched just one year in the majors, won one game, but had a pretty good ERA.

And, oh yeah, WE HAD NEVER HEARD OF HIM.

Then the jokes came. First, on the card, Burton looks like he's about four feet tall. He's listed as 6-3 on his card, but that didn't matter to us. He was little Jimmie Burton from that point. My brother joked facetiously that Burton would be a star and just you wait. In fact, Burton was amazing just because my brother pulled him first out of a pack.

This was how the legacy of Jim Burton was born in my brain. Not because of any Game 7 outing in the World Series. But through joking around with my brother. Burton would never have another card. He returned to the minors and struggled and by 1978 he had retired from the game. That didn't matter.

I knew who Burton was. And I had a memory of him ... well, his card anyway. Forever.

I valued Burton's card so much that when my brother got an upgrade of the card, I received the hand-me-down (even though I was older -- weird). I can remember it to this day. Creases all over it, with some huge, cardboard-rippage in the upper right corner.

The other day I was looking at baseball-reference and noting how players from the '70s were starting to leave this earth at quicker pace. And then I saw that name: Jim Burton. I clicked on it warily and the man was one and the same.

After a couple of searches, I found his obit. Burton died in December at age 64. Like many former players, he struggled to adjust to normal life. But then he started and ran a successful printing company and later did missionary work in Haiti.

It was good to make that full circle connection with Mr. Burton, to find out what happened to him after he was such a topic of hilarity among a couple of kids, ages 10 and 8.

Today, Burton is gone. My brother doesn't collect anymore. My other brother has his cards, but I don't think he pays any attention to them.

But back then? We thought Jim Burton was great. Even if we had a weird way of showing it.

Swing And A Pop-up said…
"Thankfully?" I wasn't collecting in 1976 or I'm sure my first Red Sox card I pulled would have been Jim Burton. It would probably have been the top card just sitting there waiting for me.
January 15, 2014 at 11:15 PM