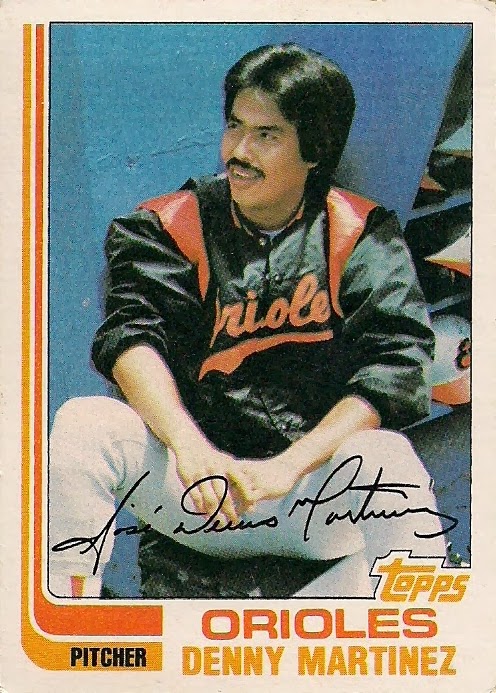 A few months ago I wrote a post about the best collection of Topps sets when you grouped them by year. For instance, all the sets from a year that ends in "7."

My favorites out of that particular grouping are probably the "3s" and "5s". But no matter what my favorites are, it's a fact that there is only one group number for which I have not completed one set.

If I explore why that is, this is what I come up with:

OK, then. The "2s" are not very popular with night owl.

Recently, Mark H. discovered that there are people who blog about baseball cards. And to celebrate this discovery, he's been sending bloggers cards! This is very proper behavior, by the way.

Not too long ago he sent me cards from both 1972 and 1982 to help me with my sets. He also sent one other card and one other non-card item that I'm saving for later. Trust me, they will be well-timed.

But let's see the twos, shall we? 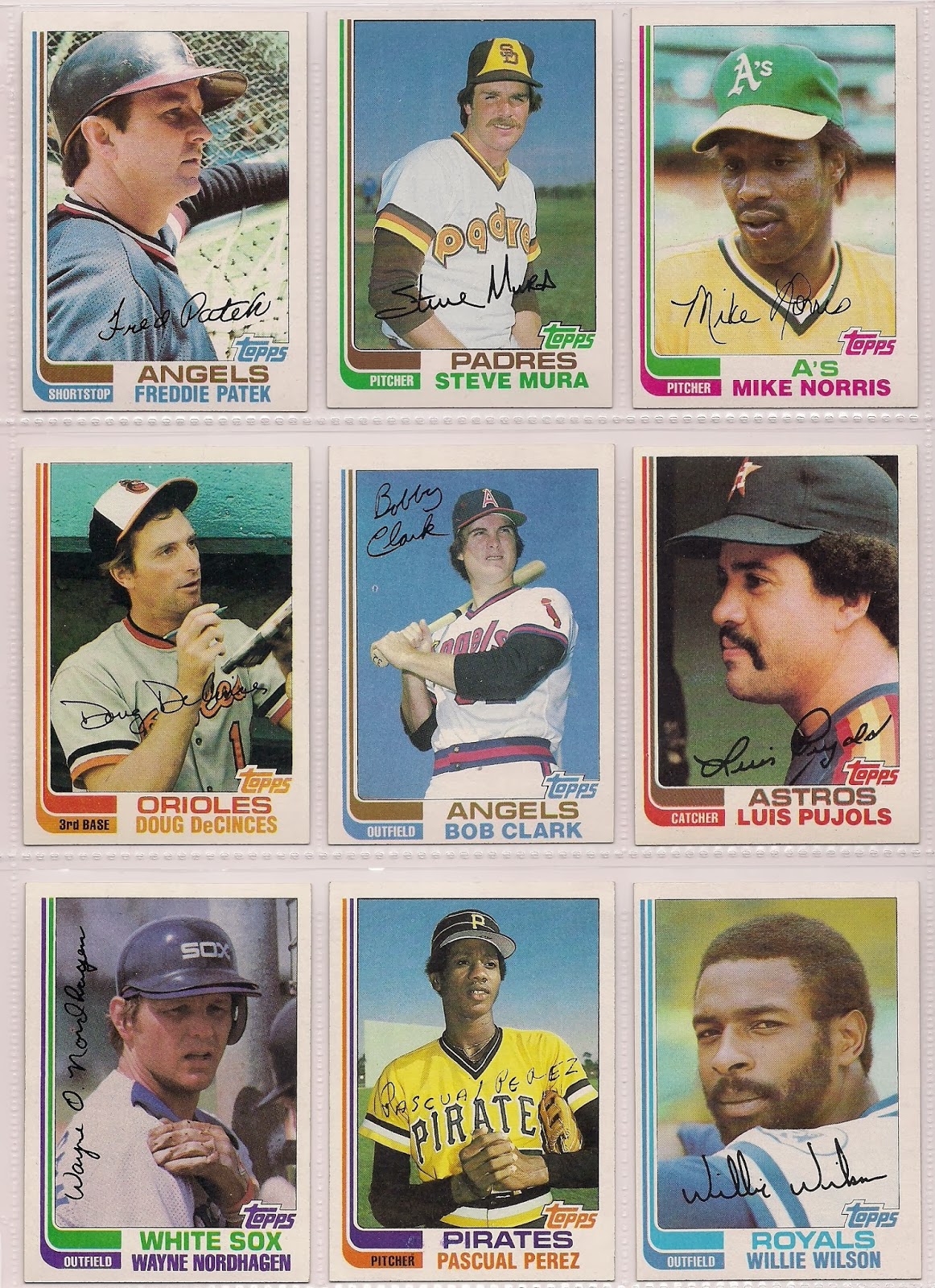 Mark sent a whole bunch so I had to display them nine at a time. They were all minty fresh, too and I got a faint whiff of gum from them, which is great. Not as great as Doug DeCinces signing an autograph, but still great. 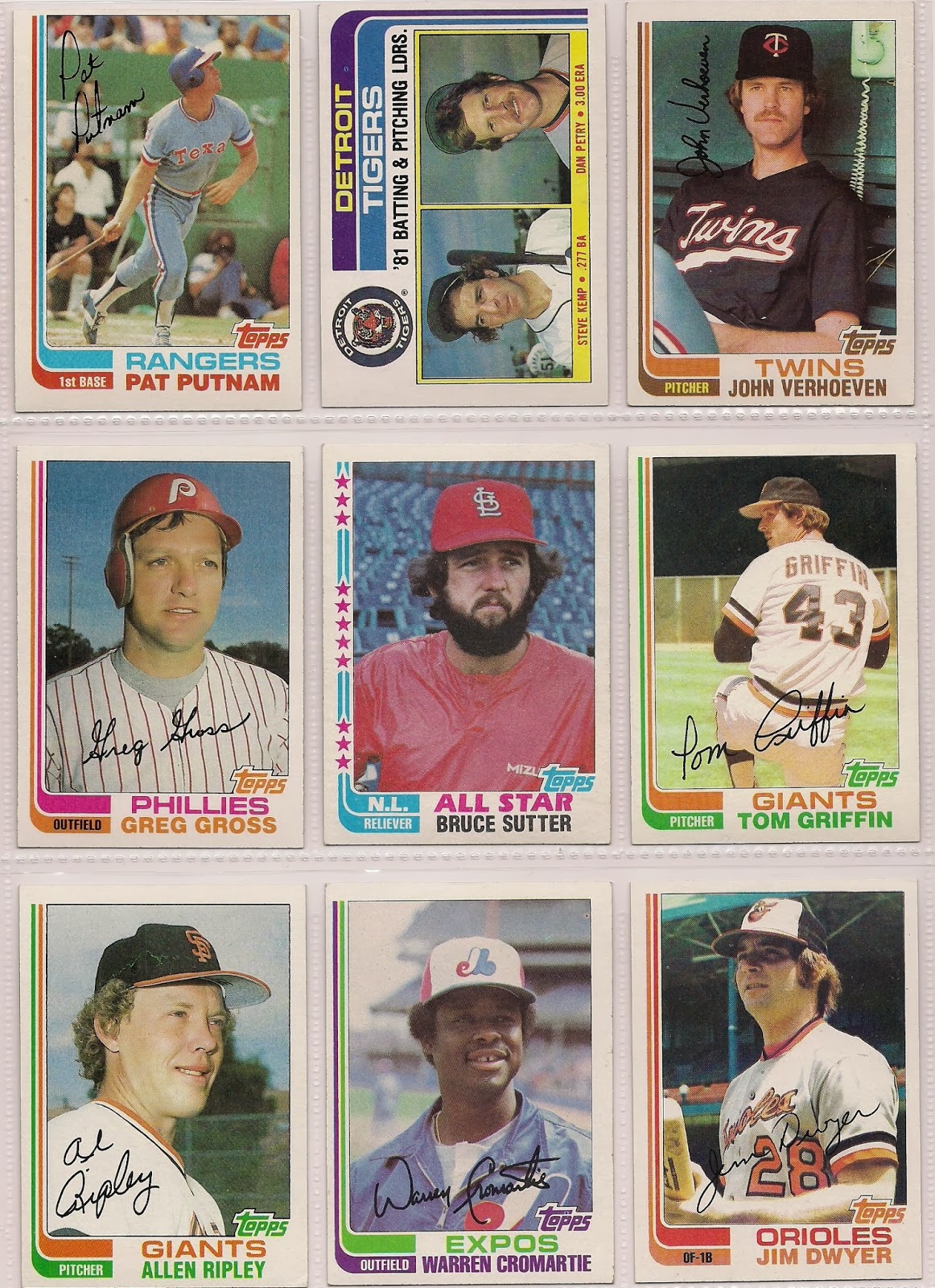 The Bruce Sutter card is literally the star of this panel. The Verhoeven card I know I had once before. I don't know why I got rid of it. I'm guessing someone collected phone cards. 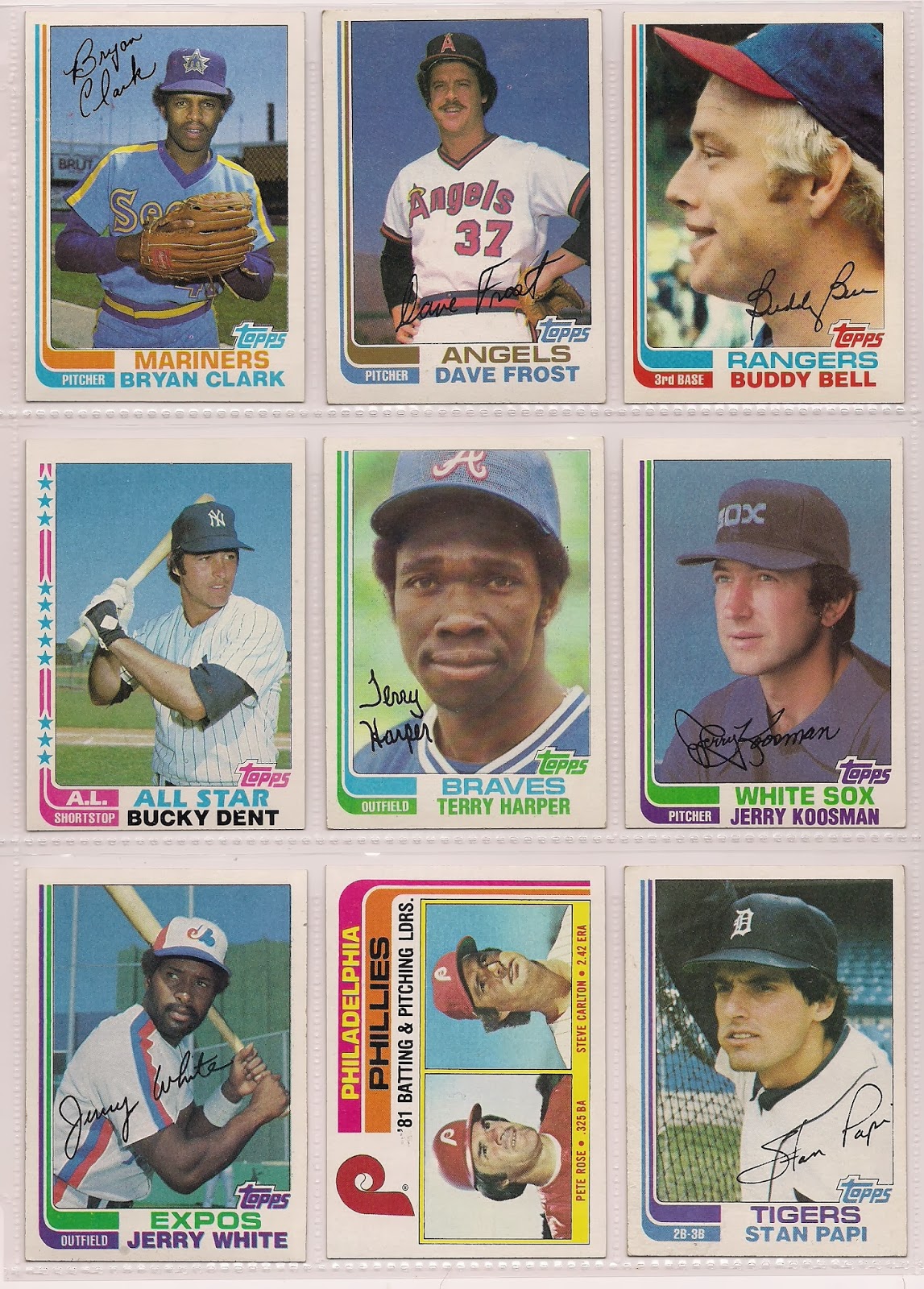 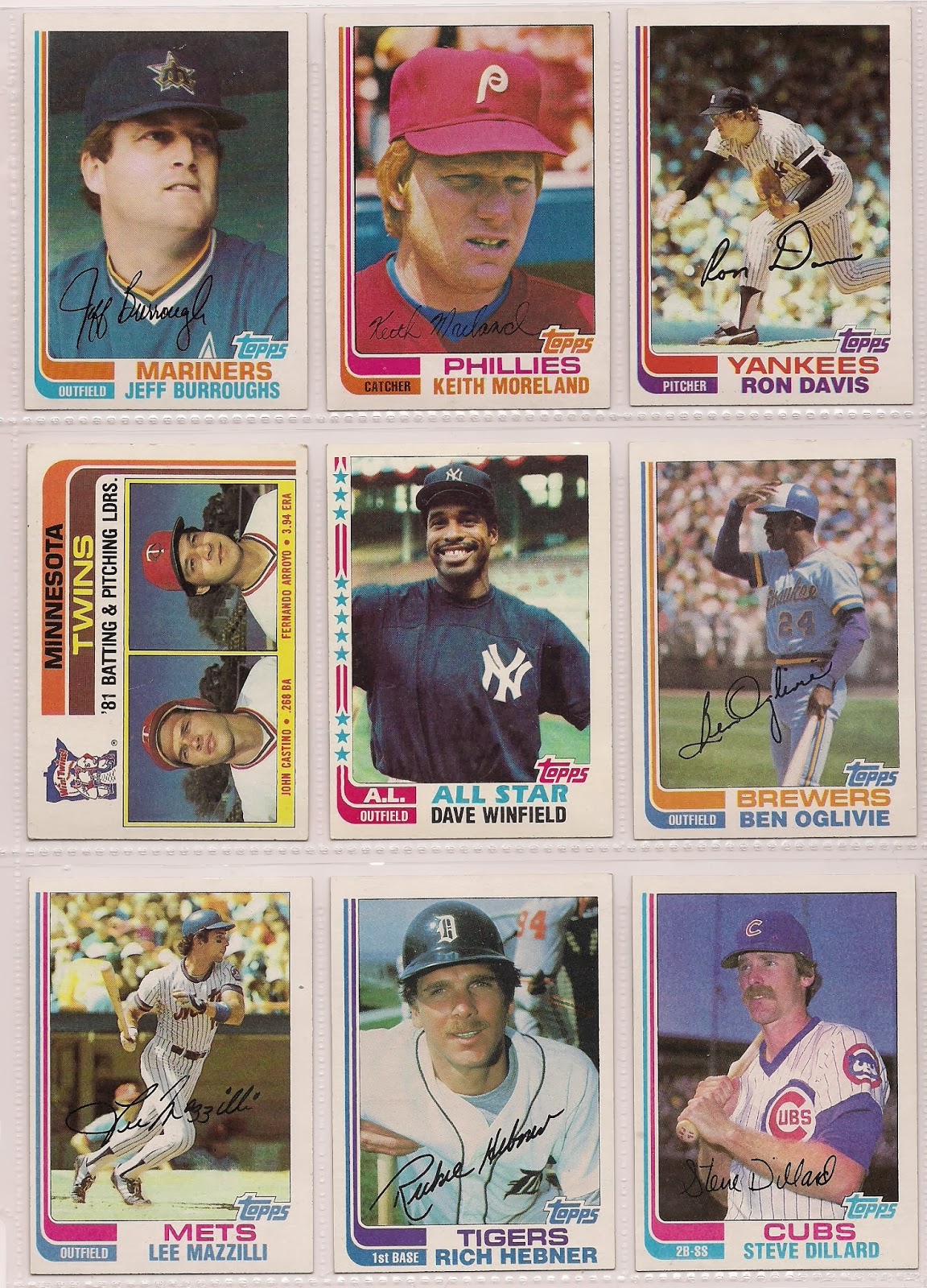 I distinctly remember collecting '82 Topps back in '82 and noting how few Yankees came out of packs. Particularly the all-star cards, of which the Yankees had four. By this point, my Yankee friends had stopped pestering me for cards, so I figured it was a Topps plot to filter Yankees cards away from Yankee haters. 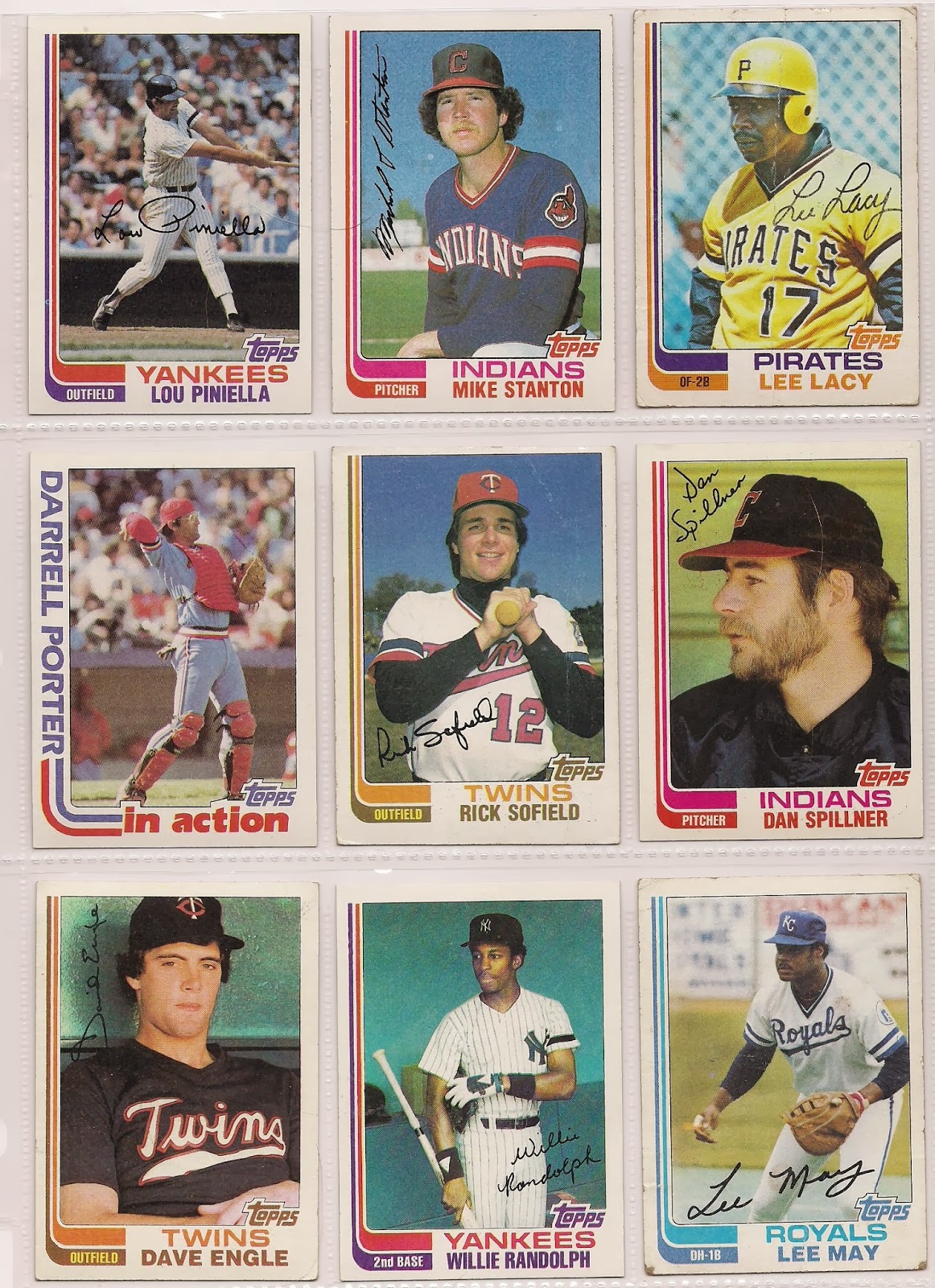 I think that's the last "in action" card I need. Or maybe not. But I'm absolutely certain that it's a great card.

1982 Topps still evokes memories of the excitement I had as a youngster collecting cards, even if I was well into my high school years.

Now moving on to some cards that I didn't collect at all when they came out -- because I didn't know what baseball was at the time. 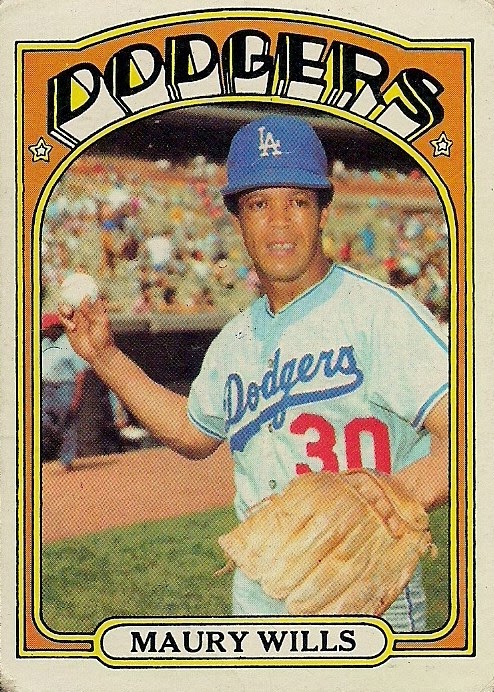 This is the best set of the "2s" and what better card to illustrate that than Maury Wills' last card? 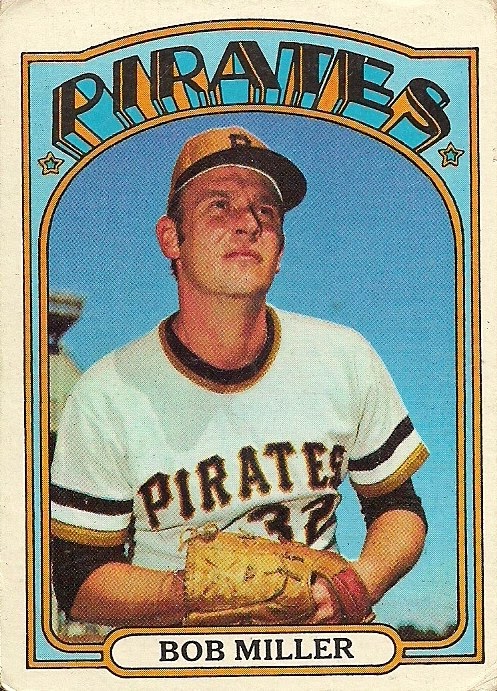 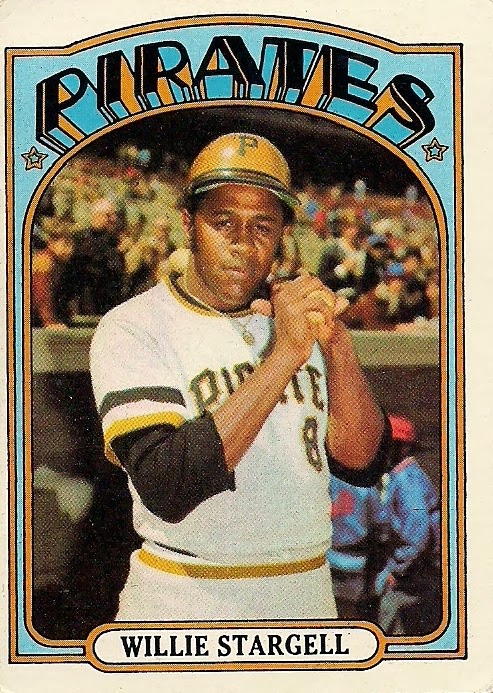 Not everyone can be a one-team man. 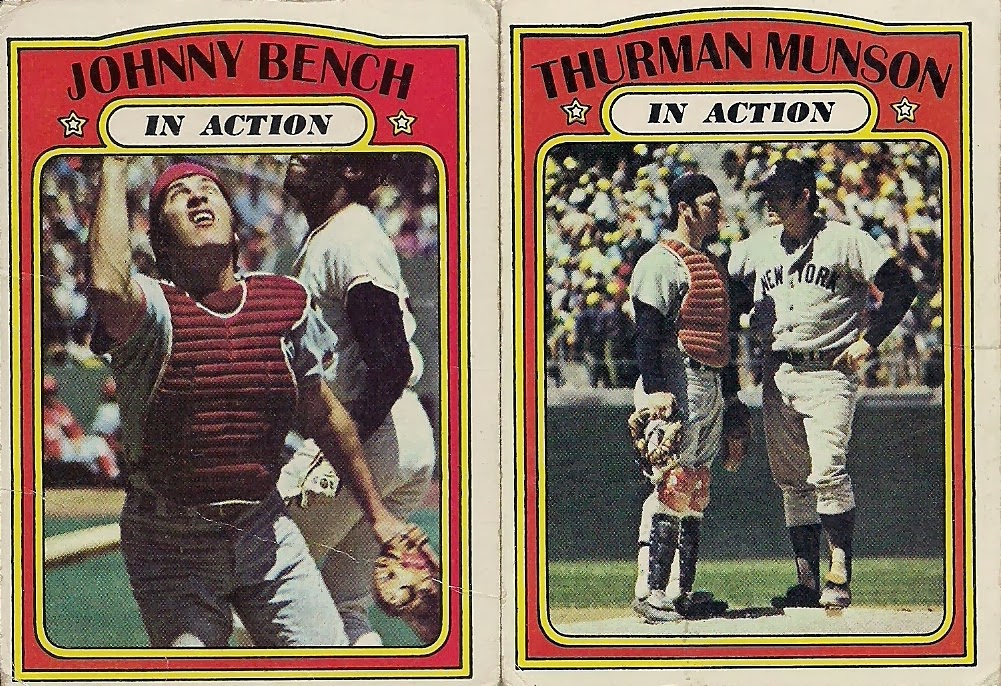 Finally, two of the best catchers of the 1970s in action.

That's another reason why I should treat the "2s" sets with a little more respect. They were the only sets to dedicate an entire subset to "IN ACTION."

But that's probably not enough for me to ever try to complete 2012 Topps.

Nick said…
I'm also glad Mark discovered the blogosphere as well, looks like he hooked you up! He's sent me some great cardboard that I'll soon be posting as well.
January 29, 2014 at 9:14 PM

Commishbob said…
You posted a card of El Presidente? Color me surprised. I thought you were still holding that grudge.
January 29, 2014 at 9:29 PM

hiflew said…
There's not much action in that Thurman Munson "In Action" card unless you think of a mound visit as "action-packed." It is also really weird to see Pascual Perez without his trademark Jheri-curl.

As far as the 2's go, I have completed 1992 Topps, but it's not really anything special. There is probably only one really memorable card in that whole set and that is the Cal Ripken pictured next to the Lou Gehrig plaque.

night owl said…
I can handle Oriole El Presidente a lot better than Expo El Presidente.
January 30, 2014 at 2:15 AM

Mark Hoyle said…
I'm glad the cards found a happy home. Have many more 70's and 80's dupes up for grabs. Reading all the blogs and making trades and passing along cards has been a lot of fun..
January 30, 2014 at 8:59 AM

Fuji said…
My brain hurts going through and looking at all of those designs. After several minutes, I still can't pick a favorite. I'm thinking about turning it into a math problem and letting the numbers decide.

From this point forward... the 2's fade fast.