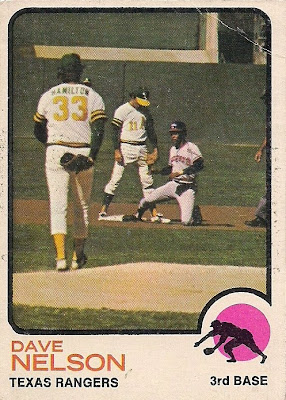 On the year-end post, I wrote that my worst habit during the previous 12 months was starting a new series and then not following up on it.

Like many people, I love new ideas -- until they're not new anymore and work has to be done to keep those ideas alive and interesting. Then I have no use for them.

But first, I want to tell you about a NEW new series.

But this one is going to work! I promise!

I have faith in this one because it's something directly in my area of interest, it's not all that difficult, and I have the cards to complete the feat.

How is it possible I didn't think of this before?

Now, I hear The Lost Collector groaning already, but really he's the only one and I think this is going to be lots of fun. I love countdowns, I love the '70s, I love cards from the '70s, how could this possibly go wrong?

The best thing is I can do this countdown without fear that I'm missing a bunch of cards that belong in the countdown. My completion of the 1979 Topps set has boosted my confidence and with 7 1/2 of the 1970s Topps sets completed, I've got most of the cards I need.

However, I'd like as many as possible. Therefore, I will still be trying to accumulate the 1972 Topps cards that I need, and even though I don't have a want list for it, if you think there's a fine 1973 Topps card that deserves inclusion in the countdown -- such as the Dave Nelson card up above or specifically the Pat Corrales card (hint, hint, I don't have it yet), -- please think of me. I'm sure I can deliver unto you some cards in return.

I'm also missing almost all 1970 Topps -- but there can't be many candidates in that pretty dull set. As for Kellogg's and Hostess, I think I have enough to represent. I don't think a lot of those will make the cut.

As for criteria, I'm not going to consider what "people in the business" consider the best cards of the '70s -- you know, hot rookies. You may see some of those cards in the countdown, but it won't be primarily because of their rookieness.

I consider cards in my own way. That primarily means the photo, possibly some historical connection (for example Fred Lynn's '76 Topps card connected to his breakout year in '75) and the overall look of the card.

You can probably guess what some of the top cards are already -- they've been featured in a lot of places over the years.

But you haven't seen them counted down.

Among 100 of their brethren.

I know I've already announced a 100 best worst cards in my collection countdown, too and I still plan to do that. But I can't promise you'll see it in the near future with this new project.