My 15 minutes of fame

December 02, 2008
When I look at baseball cards or famous sports photos in which fans are visible in the stands, I often wonder whether any of those fans discover that they are forever immortalized in the photograph.

I would love to be there when someone looks at the photograph and realizes that he or she is on the card. What a great moment that would be.

There are hundreds and hundreds of photographs, whether on cards or in magazines or yearbooks, in which fans' faces are visible. But not once have I heard of anyone saying that they appeared in a published photograph as a spectator. There are famous photos of identified spectators in the stands, but I'm not talking about that. I'm talking about the anonymous fans watching a game. I'd love to hear their stories.

Here's my story: I did appear on a baseball card. Although when you see it, you're going to be pretty disappointed. It's still kind of neat in its own small way.

As a young sportswriter, I covered a new minor league franchise, called the Niagara Falls Rapids. They were a short-season Class A team of the Detroit Tigers. They played in the New York-Penn League. The most famous player to come from that team was a pitcher named John Doherty, who enjoyed brief success with the Tigers in the mid-1990s. He was quite a character and a joy to interview. Nice guy. Two other players, Ivan Cruz and John DeSilva, played briefly in the majors.

Like many minor league teams, the Rapids issued a baseball card set as a promotional giveaway. I have the 30-card set. It features players on the team, the manager, a coach and the general manager.

This is the second-to-last card in the set: 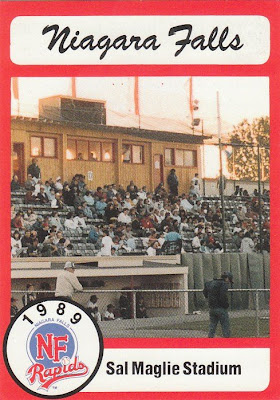 That is a picture of the primitive "stadium" where the Rapids played their home games. It was better suited for football games, and quite a few high school games were played there. The stadium is indeed named after former New York Giants pitcher Sal Maglie, who was a native of Niagara Falls, N.Y.

At the top of the photo is the press box, and that's where I come in. Where the windows are, I'm the guy on the left.

OK, you can't make out a thing, and nothing I said here would stand up in a court of law, but I'm telling you that's me sitting down on the left. The guy in the middle is the scorekeeper (probably asking me for the 90th time if the pitcher just threw a wild pitch or a passed ball). The guy standing on the right broadcasted the games for one of the area radio stations.

The Rapids no longer exist. There's no minor league ball in Niagara Falls. But the card lives on.

So, there you go. I'm one of those spectators who appeared on a baseball card.

Scott C. said…
Great story! I watched a lot of NY-Penn League baseball when I was younger. I lived near Elmira which hosted the Red Sox (later the Marlins) Class A affiliate - the Pioneers. I think I even have the Pioneers team set from the same year as your immortalization card.
Scott C.
December 2, 2008 at 11:08 PM

Dinged Corners said…
Wonderful. This is one of those thoughts that glance in and out of one's mind when looking at cards. There are thousands of faces on baseball cards through the ages. How many of them knew?
December 2, 2008 at 11:48 PM

Motherscratcher said…
Sal Maglie - I wonder how many of us have only heard of him beacuase of Ball Four?

I never appeared on a baseball card (that I'm aware of), but I did appear in another photo. It's one of those panoramic Stadium shots. It was taken at an OSU football game against Akron.

I can find myself in the picture because I can remember whexactly where I was sitting and its against a wall (And I was, for some reason, still lucid at that game). There's no way to prove it was me as I'm just a little red dot, but I'd bet my house on it.

I wonder haw many Buckeyes fans have a pisture of me in their basement bar rooms?
December 3, 2008 at 12:29 AM

AlbuqwirkE said…
That is awesome! I see that the Portland Sports Card Co currently has ten of these sets available on eBay for four bucks a pop...
December 3, 2008 at 2:00 AM