That is the outdoor temperature where I live as I write this.

It's a conversation starter, but it's really no big deal. We north country folk can depend on the temperature plummeting to this number or below just about every winter. You deal with it for a few days, then it gets warmer, and maybe you deal with it again later in the winter. On you go.

The most amusing part is seeing how other parts of the country handle that same cold front. In those parts, it's maybe 18 degrees and oh, what a crisis. This also happens during a snowstorm. The more populated portions of the Northeast will get 6-8 inches and they've been "hammered." Meanwhile, the lake effect machine in the north country will stir up maybe 2-to-3 feet in a 24-hour period almost every winter, and we're a mere chuckle on the Weather Channel. No state of emergency, no run on gas and food staples. It's just Friday here.

In fact, today I went outside without a coat. I had to let the dog out and I stood out there -- it was probably minus 6 at the time -- and I said to myself, "you know, it's really not that bad."

Anyway, what's this have to do with baseball cards?

Well, I was thinking. Everyone is always so fascinated with "the best" all the time in sports. And baseball, especially, with all its stats. Every other day in the newspaper you can see the top 15 or so in batting average, home runs, RBIs, doubles, etc. And baseball-reference will give you leaders instantly in every other category as well as a bunch of categories you never knew existed.

What about those freezing their asses off along the Mendoza line?

Believe it or not, I've thought about those unfortunate frigid folk ever since I was a little kid first collecting cards.

I got a kick out of that more than anything. It was my own special knowledge. Nobody would care who had the worst batting average in the 1977 Topps set. But I did. And I'd be the only one who knew.

The trouble is, I never had enough money or patience to complete a set back then, so there were lots of cards missing and lots of players with terrible batting averages left out.

Fortunately, I'm an adult now with a modest amount of money and the ability to complete sets.

So now it's time to figure out who had the worst batting averages in a few of these sets.

It'd be nice to take care of this in one post and find the absolute worst in each set. But I don't have time to go through every set in a single day. So I'm just going to do the bottom 10 for the 1979 Topps set -- the one most recently completed. If I feel up to it, I'll do it for other sets, too.

The key every time I would do this as a kid was to see if there was anyone who had a lifetime batting average below .200. "Those guys must be awful!" I thought. Especially awful. And awfully special. 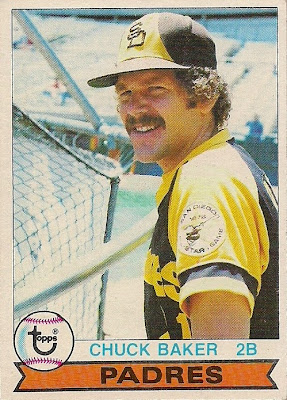 This is Chuck Baker's rookie card. He would disappear off of Topps cards for a few years (although Fleer featured him in its 1981 set) and then reappear in the 1982 Topps set as a Twin. That .207 would be the high point for him. He finished out with a career average of .185. 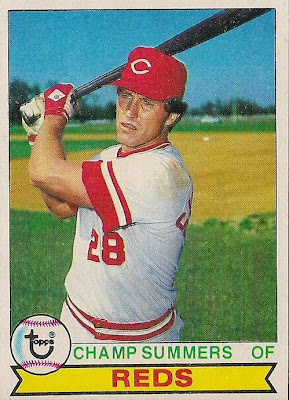 Champ would eventually get himself turned around after joining the Tigers -- and reacquiring his facial hair. But in 1979 he was barely hanging on after five years in the majors. 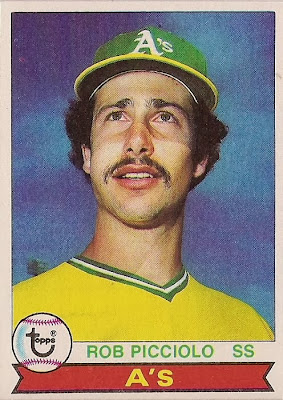 Don't think we didn't notice how pathetic the A's had become by 1979. Piccolo was merely the worst of several players on the A's with career averages far below .250. I'm not sure how Chuck Finley suckered Jim Marshall to manage that 1979 team. 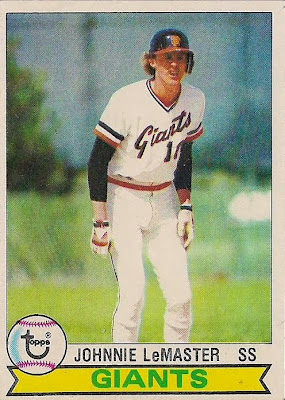 From the moment my brother and I saw LeMaster's 1977 Topps card, in which we swore he was wearing lipstick (taking a look at the card now I don't know how we ever thought that), LeMaster was a target of derision. That .205 lifetime average didn't help. LeMaster would last through the 1987 season, which was longer than us kids would ever expect. But he hit .222 for his career. 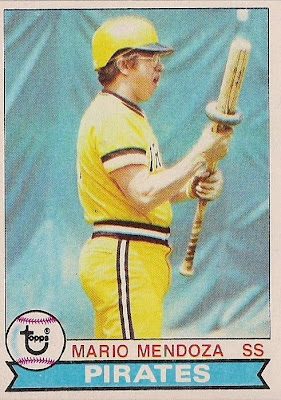 The namesake for the Mendoza Line -- which was the divider between those who hit above .200 and those who hit below -- actually batted a surprising .218 in 1978.

It was so surprising, apparently, that Topps miscalculated Mendoza's career batting average on his 1979 card. 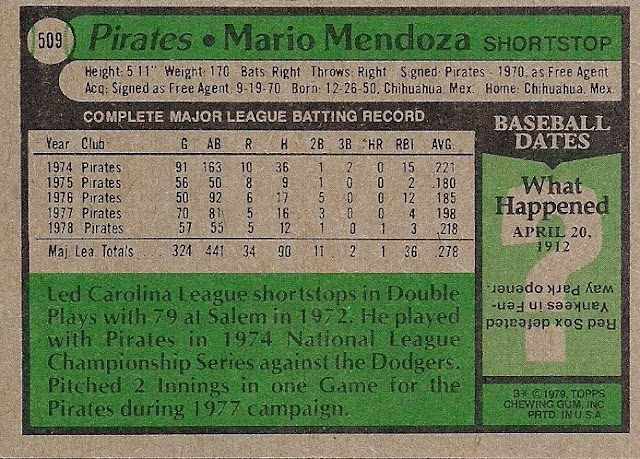 How Topps could get a .278 average out of that mess of stats above it is mystifying. I recalculated and that total should actually be .204. 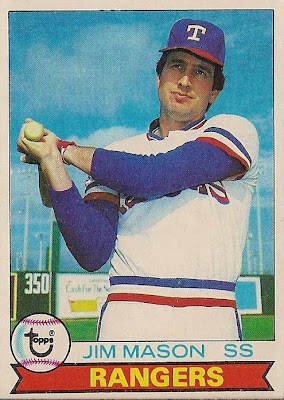 Mason's inability to hit always amused me because I knew him as the Yankees' starting shortstop in 1974. Turns out, that was the only year that Mason hit at least .250 -- batting .250 on the dot. 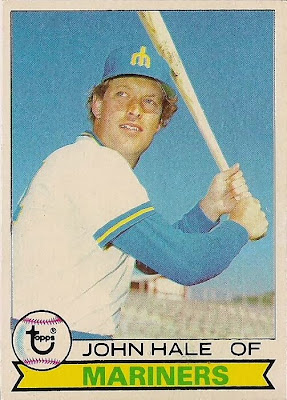 Hey! We got below .200! That makes this mission an instant success.

Hale is the Dodgers' secret shame. Most Dodgers of the 1970s hit very well. But Hale could not and I really wanted him off the team. Fortunately, L.A. finally waived him and the desperate expansion Blue Jays picked him up. Then the equally desperate expansion Mariners purchased him from the Blue Jays 12 days later. 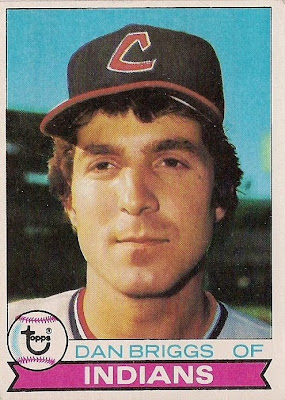 In 1978 and 1979, we became aware that Topps double-printed some of their cards. It was pretty obvious opening packs as certain cards appeared over and over. Dan Briggs was a double-printed card and I accumulated my share. I was pretty certain that they double-printed his card because he was so awful. 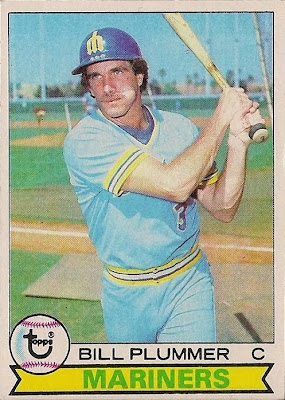 Ah, yes. The man who couldn't beat out Johnny Bench for the Reds' starting job. Back then I interpreted "terrific defensive catcher" to mean "he's batting .188 for his career!" 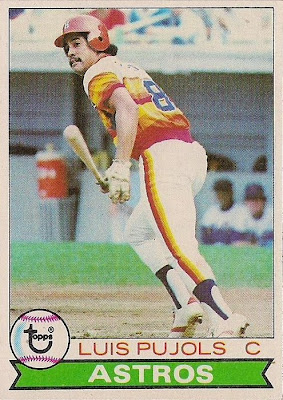 Pujols took on new meaning when Albert stole Luis' name and fashioned a legitimate major league career out of it. But at the time, there was only one "Pujols" and my goodness what an appropriate name. I had never seen a career .125 batting average on anything outside of my own Little League stats at one point. How could anyone bat that and be in the major leagues!

This card is not double-printed but I sure accumulated a fair amount of dupes, I don't know why. When you look back on Pujols' Topps cards (he lasted through the 1984 set), he actually has some nice cards. He got his career batting average all the way up to .193, too.

I'm not willing to say that .125 is the worst career batting average you will find on a baseball card, but it's got to be in the bottom 50 I would imagine.

(Also if you put a minus sign in front of his .125 and move the decimal point to between the "2" and the "5," you've got the temperature outside when I was trying to start my car after work last night).

I may keep this going just to see where Pujols stacks up in other sets.

Who knows, if it stays below zero outside, you could see a lot more of these before winter is done.

Anonymous said…
Awesome post - that's a great read. It's funny how they screwed up the Mendoza average, as a cursory look would bump him out of the top 10.
January 4, 2014 at 4:12 PM