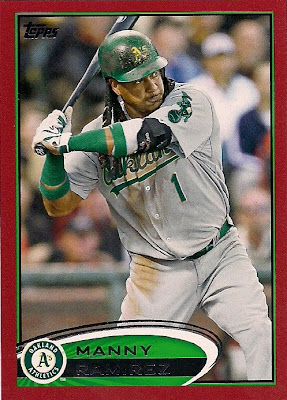 You can expect to see this card again in December. Look at all those Jingle Bells colors. It's Christmas in July! Makes me think it's going to snow even though it's 91 right now and hasn't rained for weeks.

I present this card to you while not exactly in a "Look! Manny Ramirez never played for the A's!" frame of mind. It's kind of fun, much like the old '70s days in which Bill Grief appeared as an Expo even though he never played for them, or Bud Harrelson as an Astro, or innumerable Blue Jays and Mariners in the 1977 set. But it's kind of frustrating in that it's a bit of fiction in your team binder while middle relievers remain total non-entities to Topps.

But Topps has toyed with Manny's cards for so long now -- removing umps entirely, leaving umps' disconnected legs -- that I'm getting bored with it.

I can't even get fired up trying to determine when this photo actually took place.

My theory is Ramirez is actually in a Los Angeles Dodgers uniform. I'm guessing this because Ramirez is featuring the peak extended dreadlocks look of his Dodger days, and he's also got that gunked-up helmet that he wore so vigorously with the Dodgers.

The game in the photo is taking place at Whatever We're Calling The Giants' Ballpark Today, which makes me suspect he's playing for the Dodgers even more. 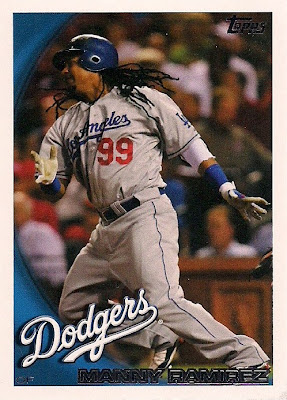 Here you see Ramirez on his 2010 Topps card, watching an extra-base hit fly in San Francisco.

Ramirez is wearing an elbow guard on his left arm, which he wore with the Dodgers in 2009. He didn't wear it in 2008, or at least not in his card photos. In 2008, he had that blue left arm sleeve thing. 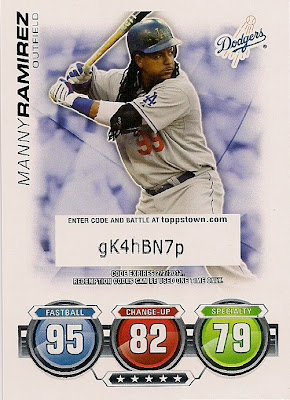 There's a look at Ramirez's elbow guard, long dreadlocks and gunked-up helmet on a 2010 Topps Attax card (along with a long-forgotten code).

Ramirez wore his hair long and wore that elbow guard when he played with the White Sox in 2010. But the White Sox didn't play the Giants during the 2010 season.

The bat Ramirez is using confused me. It's black and features the No. 22 on the end. No. 22 for the Dodgers is Clayton Kershaw. I have no idea if Kershaw owned a black bat in 2009. I have no idea if pitchers even have their own bats.

So I'm stumped there.

But I'm not going any farther with it because I've already taken way too much time on it for someone who allegedly doesn't care about finding the answer.

If you have any tips, let me know. I guess.

At any rate, this post has paid off for one reason.

I discovered when researching Manny Dodger cards that I hadn't included this 2010 card in with the rest of my 2010 Dodger set in the binder.

Fortunately, I fished out one of my many 2010 Ramirez dupes and now it's waiting to join Juan Pierre, Carlos Monasterios and all those other no longer relevant Dodgers.

Of course, this has caused my brain to ponder what other base cards I've skipped over in my suddenly Incomplete complete sets. It's making me weary, which is really the general theme of this post and the last few days.

I think I need a vacation from cards.

Night Card Binder candidate: Manny Ramirez, 2012 Topps, #393
Does it make the binder: Yes. In all its fictitious glory.

Nick said…
Because I featured that A's Manny card in my "zero-year" theme, another blogger sent me a link to the original photo that was used for his 2012 card.

It's from his tenure with the Dodgers, taken during a June 28, 2010 game against the Giants.