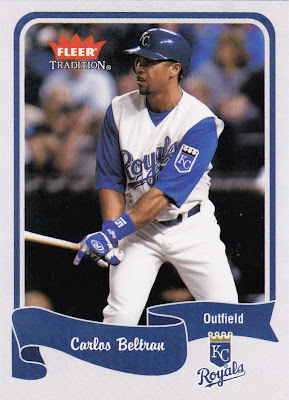 One player who I have almost never thought about during his entire career is Carlos Beltran.

Beltran is probably going to the Hall of Fame. He hits wherever he's been. He's having possibly his greatest season at age 34.

But it's taken me this long to wonder:

What cap will he wear on his Hall of Fame plaque?

As a Royal, he won Rookie of the Year honors and knocked in 100-or-more runners four times.

As an Astro, he enjoyed one of the most epic individual postseasons ever, hitting over .400 in the NLDS and NLCS in 2004.

As a Met, he was a five-time All-Star.

As a Cardinal, he is leading the league in RBIs and has 20 home runs already.

So what cap is it going to be?

Well, not the Giants or the Astros. His time was too short there. I'd like it to be the Royals, but the fact that he hasn't played for them since 2004 probably rules that out. The Cardinals is too soon.

So that means it's probably the Mets, since he spent the longest amount of time with that team and made the postseason with them in 2006.

But if he keeps playing like he is with the Cardinals and does it for a few more years, he could be wearing a cap with "STL" on it. And that'd be very weird for Mets fans, I'm thinking.

Anyway, this is a simple tribute post for probably one of the best, most consistent hitters of my lifetime. Who probably hasn't gotten enough credit. Especially from me.

Night Card Binder candidate: Carlos Beltran, 2004 Fleer Tradition, #112
Does it make the binder?: Yep. I'm not even waiting to see if he makes the Hall.

Nathan said…
He might go to the hall, but I don't think it's anywhere close to being a done deal.

You're right that he has been incredibly consistent in a lot of areas, but two of those areas, baserunning and defense, can be tough to quantify and aren't as sexy as the easy to count numbers that HOF voters love. ((And he doesn't have those count numbers and will not likely reach 3000 or 500).

I don't see Beltran as a HOFer. Very consistent, very good, but not a HOFer. His similarity scores don't line him up with anyone in the Hall currently, although the guy he is most similar with (Fred Lynn) should be in Cooperstown in my opinion.

Jason T. Carter said…
After looking again at Lynn's stats, I want to retract my previous statement reference his Hall-worthiness.

night owl said…
I didn't say I didn't talk about Hall of Fame candidates. I said I'm bored about the endless arguments over who and who should not be in the Hall of Fame.

I think if Beltran continues on the pather that he's on, he's a sure Hall of Famer. But I'm not going to get bent out of shape and start compiling essays and charts and graphs and calling voters ninnies if he isn't inducted.
July 15, 2012 at 2:42 AM

Bo said…
I think you are wrong about which cap he would wear to the hall, for the same reason I don't think he will go to the hall at all. He is perceived (rightly or wrongly) by most Met fans as being an expensive bust, due mostly to injuries and striking out looking to end the 2006 NLCS.
July 15, 2012 at 11:17 AM