My world according to Bowman 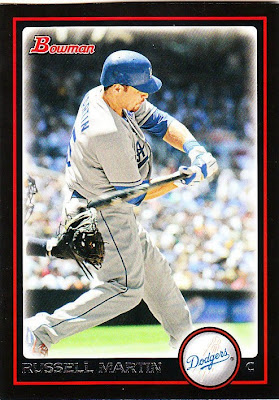 Let's establish the back story:

1. I am not a prospector. I have a very difficult time focusing on players who are not in the major leagues, even prospects from my own team.

2. I generally ignore Bowman, a set filled with prospects since its re-emergence in 1989. I think you could fill an average-sized shoe box with the number of Bowman packs I have purchased over the last 20 years. I am not interested in players who very well could be the pizza delivery man dressed in a baseball uniform for all I know.

3. I tend to poke fun at Bowman because of its repetitive design, and because of the ever confusing number of sets under the Bowman name. Then there are the sets within sets and the incomprehensible numbering system in which you might see BP10 or BPDP10 or BPDPBB10 or BPDPICAN'TFIGUREOUTWHICHDAMNSETTHISCARDBELONGSIN10.

Now, given all that, here is some rather conflicting information:

1. I've written about 2010 Bowman on this blog about 6 or 7 times already. Some of the writing has been complimentary.

2. I have gone to the local retail stores specifically in search of Bowman at least as many times as I've written about it.

3. I have actually become irritated when I see the Bowman cleaned out of the card aisles (there is no Bowman anywhere in my immediate vicinity right now).

So, how do I reconcile these two conflicting mind-sets?

Well, for one, there is just not a lot of card product out there right now. Topps Series 2 is still MIA. I find Chicle interesting, but not interesting enough to collect, so I'm only in it for a few packs here and there.

Secondly, the Strasburg-Heyward thing is just interesting enough for me to grab a pack. I may not be totally into prospects, but as a fan, a good one will get my attention. I like a good story.

Thirdly, the set is rather interesting. OK, the veteran portion of the base set is the typical Bowman borefest. (Maybe that's because I haven't found any random umpire feet this time). But I like the Topps 100 set, and the Bowman retro insert set with players on the '92 design is kind of fun. Plus, I always enjoy chrome.

Let's face it: Bowman is the story of the 2010 card season. I don't think I am saying anything surprising by adding that it will remain collecting's top story by the end of the year.

It's certainly wormed its way into my world, as much as Bowman can get into the world of a non-prospecting, hype-hating, confused-by-any-set-not-numbered-1-660 collector.

It's occupied my collecting habits enough that I'm patiently waiting for the next time I can buy some packs.

Fortunately, while I wait, the rest of the world is rabid with Bowman fever, too. And some folks are sending me the Dodger cards, which is super cool.

Ordinarily, I wouldn't show these Bowman Dodgers now, because I just received them and there are about 8 trade packages ahead of the Bowman cards. But Bowman, the attention-whore that it is, has cut to the front of the line. Bowman MUST BE SEEN when it is new. Otherwise, people will discover that it's a semi-flimsy product filled with players who have more of a chance of delivering your refrigerator than having a lengthy major league career.

So here are the 2010 Bowman Dodger that I have NOW. All of them were sent to me in the last week, except for the base Russell Martin at the top of the post. I managed to pull that all by myself -- before the Strasburg hounds descended on the card aisle and sucked up the paltry amount delivered by the distributors (ONE measley box of loose packs at Target? Really? ONE?) 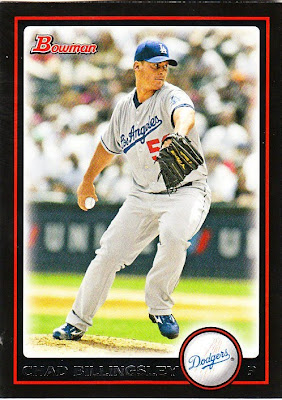 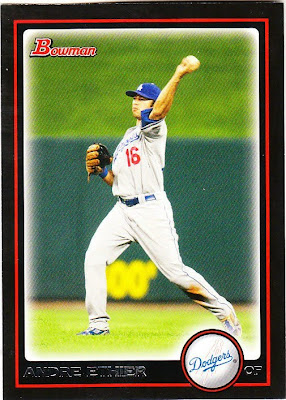 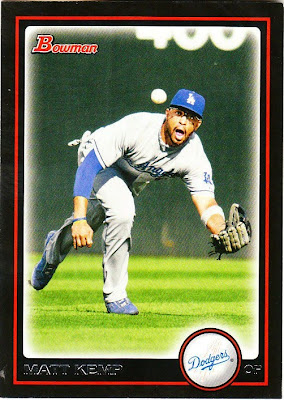 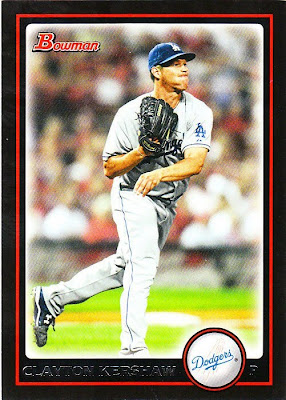 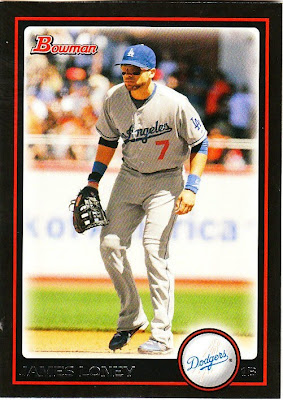 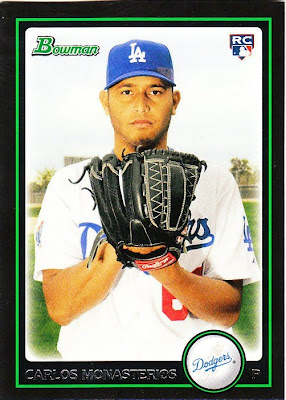 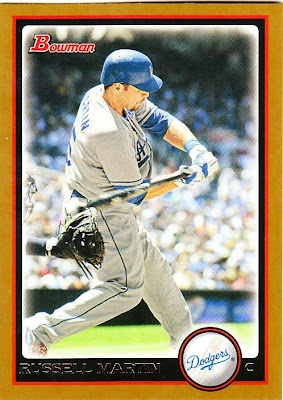 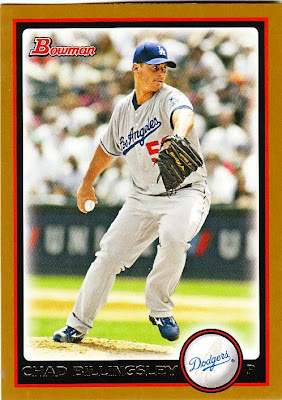 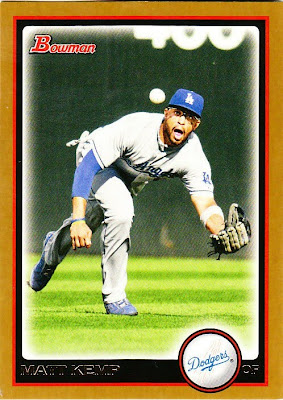 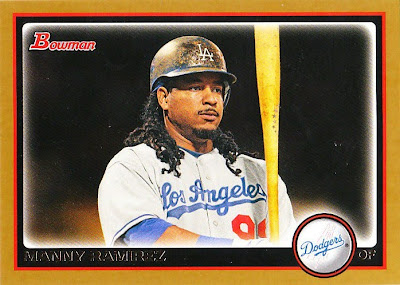 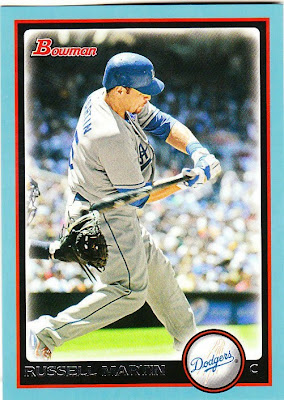 THE BOWMAN THROWBACKS (or whatever they're called): 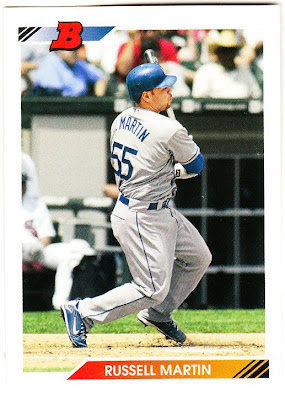 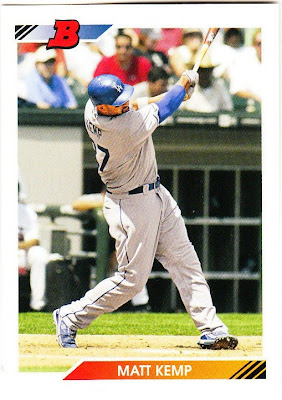 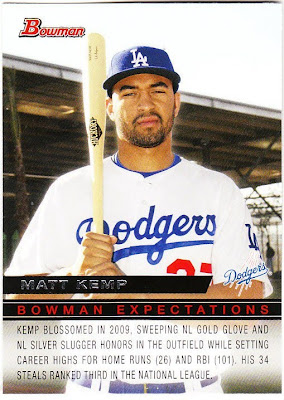 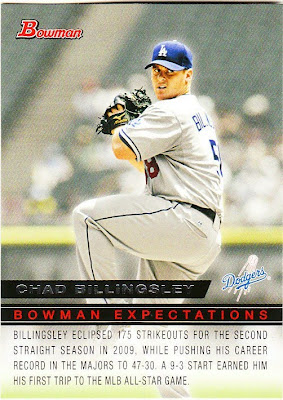 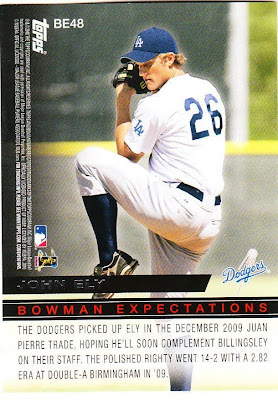 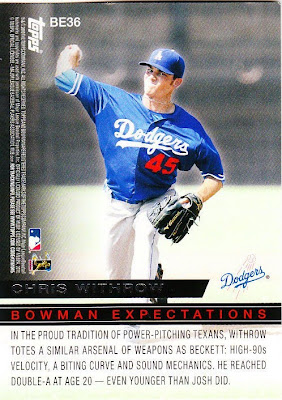 (Billingsley and Ely share the same card, which means I need another one of those cards. Bummer). 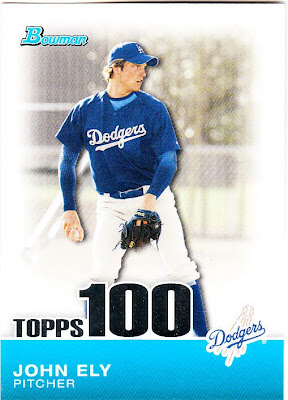 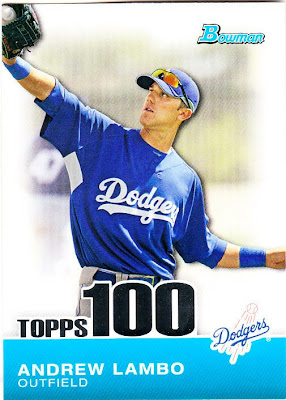 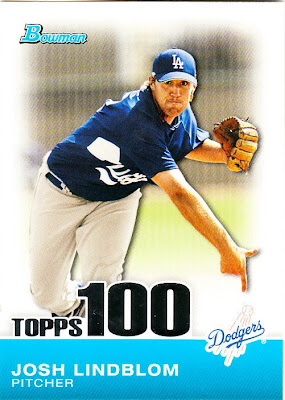 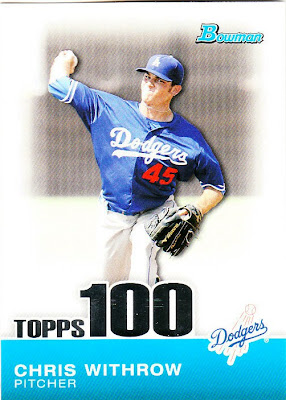 All of the above cards were sent by Joe M., Joe L. and TJ. Many, many thanks.

I still have some work to do there. I still haven't acquired a single Draft Pick/chrome draft pick Dodger (there might be only one of each). But I'll flag them down.

So, I suppose you're wondering whether I have been converted. Will I be driving 200 miles to search every store for Bowman and flip the packs on ebay?

No. What I'm doing is passing the time until Series 2 and A&G gets here. I admit, Bowman is a lot more interesting than it's ever been, whether that's due to changes in my viewpoint, or in the card industry or in the quality of the product. But when the pretty new girl comes to town -- which should be any week now -- I'm dropping Bowman on its head.

At least we had June, Bowman.

The Notorious B.U.D. said…
Yeah, I think everyone is riding the Bowman train this year.

Cardsplitter said…
I like Bowman only for the reason that it might be the only card for cup of tea players. Good for team collectors.
June 16, 2010 at 10:09 AM