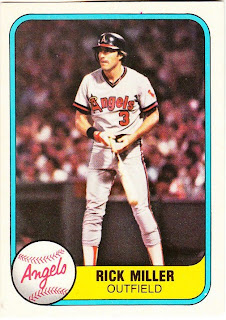 Have you ever wondered what it would be like to have all of the mistakes that you made at your place of work put on display in front of millions of people?

Or how about not just the mistakes? How about the times when you appeared momentarily unsure, confused or hesitant? Perhaps you had a goofy look on your face -- as you tried to fix the paper jam in the printer -- and it gets captured on film for all of the world to gawk at, examine and even ridicule.

This particular night card of Rick Miller, from 1981 Fleer, was suggested by a reader for my awesome night card series. He said Miller looked perplexed.

He certainly does. Miller appears as if he is getting a sign from the third base coach. He seems very focused. Maybe he's confused. Maybe he's hard of seeing. I don't know.

But I do know that Miller is frozen in time forever, staring at something, looking vaguely stupid, only because we don't know the context of the situation.

Whenever I think of how cool it might be to appear on a baseball card, I think of this: I could end up looking goofy for all eternity. And what if I had a brief career? I might have only one card. And it might look like this.

Of course, these are the ramblings of someone who doesn't like having his photo taken and used to cringe every time his mug appeared in the newspaper with his column.

Maybe Miller couldn't care less that he looks a little goofy. Maybe Miller thinks I should get a life.

So, I think I will. Blogging is done for the day.