What I missed while I was "gone" 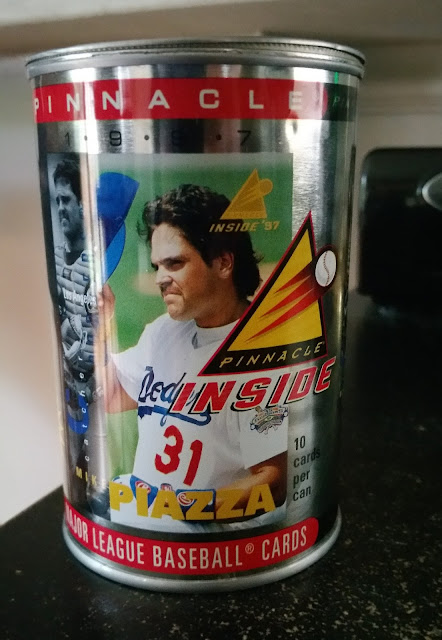 You've read me whine many times about how busy I am during the month of March. It is annually my busiest month of work. Or at least it used to be.

I'm finding that June is quickly surpassing it. I won't go into details, because nobody cares, but the added responsibilities at this time of year over the last couple of years has led to many extra hours on the job. It actually begins in May and didn't end until, well, yesterday.

Needless to say, I slept until 1:15 in the afternoon today, which is shocking even for this night owl.

During my wildly busy time, I put on a good front on this blog, attempting to sample what was new in the card world. But I didn't focus on it at all and there is much I don't know about everything that has been released during the spring -- Bowman, Bunt, Archives, Series 2 -- I know the basic details only. Heck I just got my Dodgers want lists up for Bowman and Archives today.

I can't tell you what half the cards that I need from those sets look like, I know little about the inserts, and definitely don't ask me about the variations -- I've pretty much dismissed those from my mind to preserve my sanity.

So I am grateful to Cards on Cards for recently sending me some cards (in the above Pinnacle can) that are from the sets that I just mentioned. I can finally absorb -- now that I am not master of ceremonies, caterer and sports editor all in one -- what other collectors have already memorized. 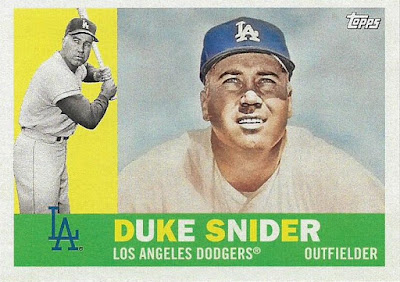 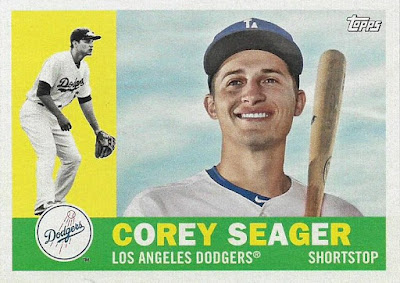 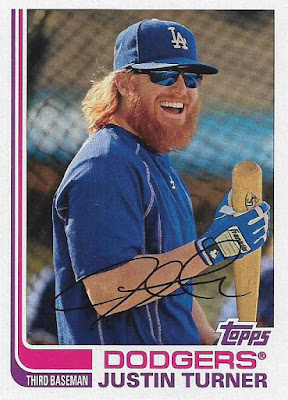 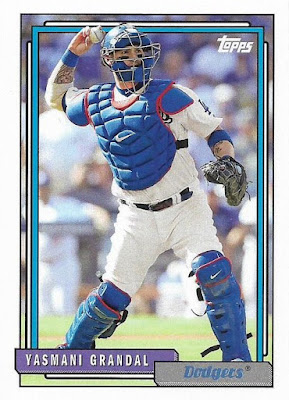 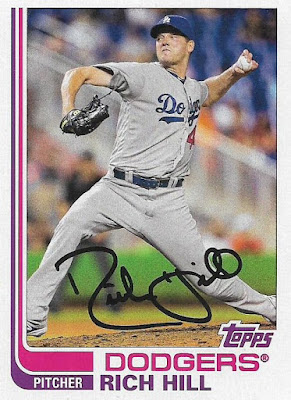 I finally have Archives Dodgers in my possession. My lone rack pack purchase of this stuff turned up none and the cards weren't inspiring enough for me to buy more.

I'm wondering if the Snider photo isn't actually from his Brooklyn Dodgers days, the cap looks altered. Also, I enjoy that Rich Hill appears to be able to sign his own name. The retro designs expose many modern ballplayers for their terrible penmanship. 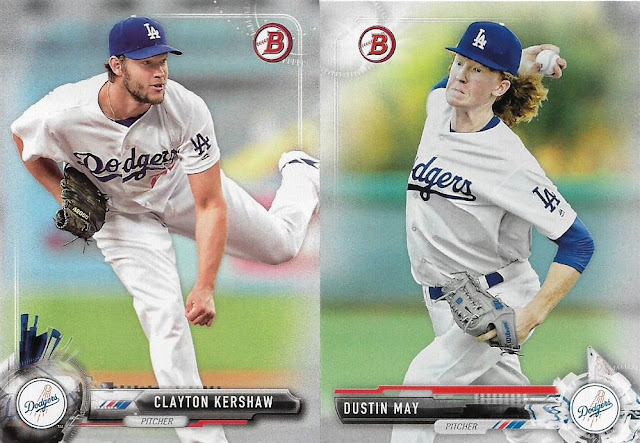 Moving on to Bowman now. I haven't bought any nor even noted whether it's in any of the stores near me. The look of Bowman this year is as uninspiring as ever, almost generic.

I don't know how Bowman selects which prospects that appear in the set, May isn't among the top class of Dodgers selections. But it is my first look at him and he scares me. I think he needs more sunlight. 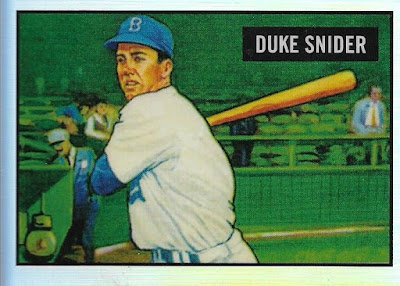 This, I believe, is an insert for Bowman this year, one of the 1951 themes, all chromed up, because there's nothing more natural than a shiny 1951 Bowman card. 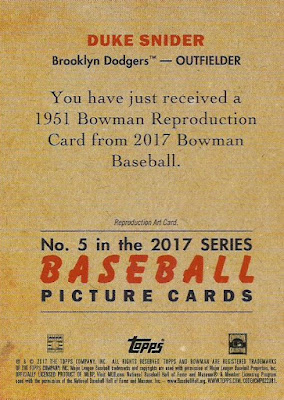 As you can see, they worked overtime on the back. 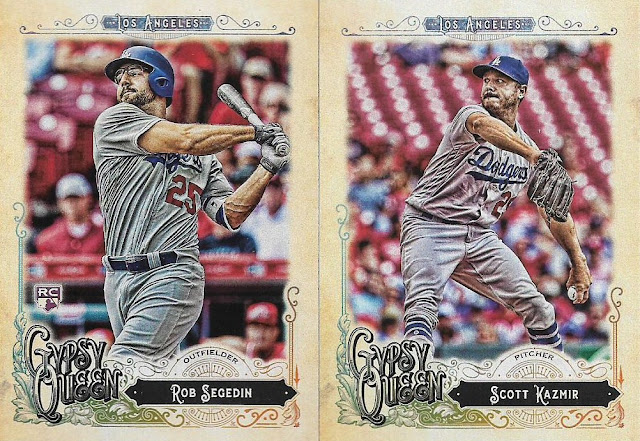 Gypsy Queen showed up just as I ended one very busy period and started heading into another one. I kind of like the look this year, but as usual wouldn't miss GQ if it disappeared tomorrow.

Both of these guys have made no contributions to the Dodgers this season. The Dodgers are like the internet, you don't want to know the disaster behind the scenes that makes it all work.

The rest of the cards in the package were made before 2017. Perhaps I know a little more about those. 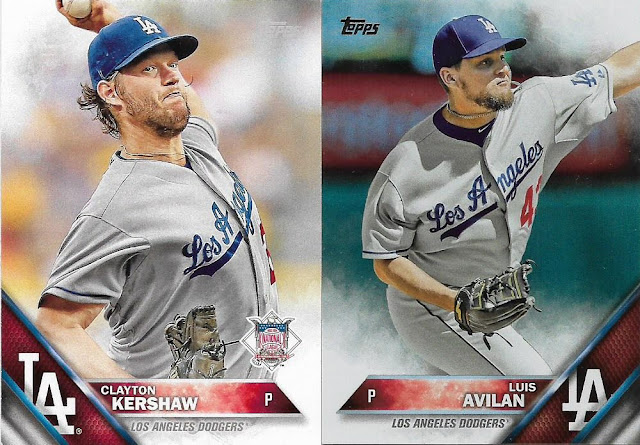 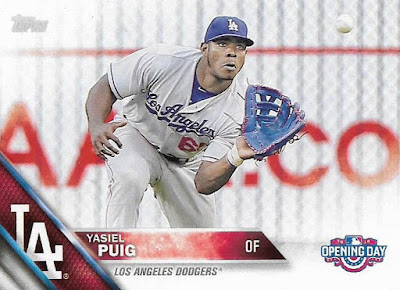 Ugh, sorry about the 2016 flagship. You thought you were done with this design forever.

I grouped three different incarnations of the design -- NL team set, foil parallel and Opening Day -- to show how often the same design appears each year and also to get it over with in one shot. Like eating your vegetables first. 2016 Topps -- it tastes so awful! 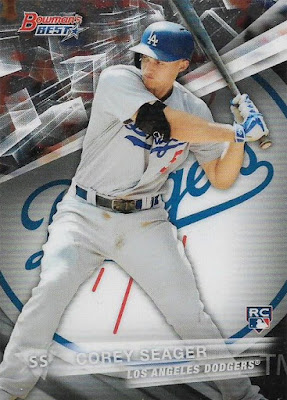 This is a fancy insert from last year's Bowman that Cards On Cards can produce because he has an exclusive Loot Locker subscription. I need to get one of those. If I can get over my fear of pulling nothing but Marlins and Diamondbacks, I might. 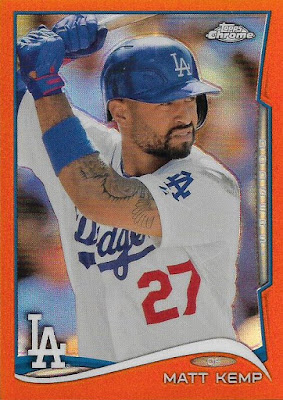 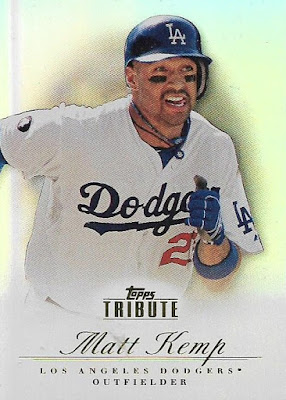 A couple from the glory days of Matt Kemp. I hear he's still doing pretty well for the Braves. But until he has another MVP year and gets the award stolen by a PED cheater, I'm not impressed. 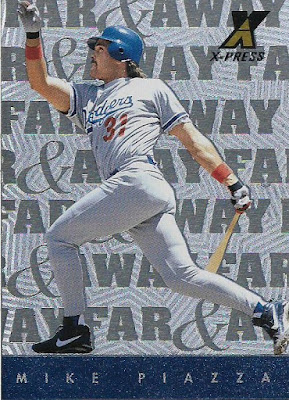 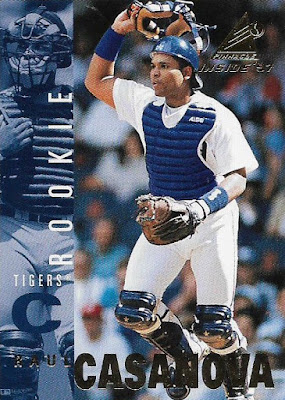 And, sure, what the heck, let's show a Pinnacle Detroit Tiger that arrived with the rest of the cards. I don't know why. I suppose he looks Dodgery, so I'm going with that.

It's good to be "back" enough that I can absorb a little more of what's going on in the card world. I don't buy a lot of modern cards these days, they just don't interest me, but I do like to at least be aware of what is available.

Sometimes people go to this blog for answers. I have to at least pretend to be paying attention.

Fuji said…
Glad to hear your busy period has come to an end. I hope you enjoy your summer. That's a great action shot on the Piazza Far & Away insert. Pinnacle did a great job of capturing that sweet looking swing.
July 1, 2017 at 9:30 AM