June 11, 2017
(Greetings on the day after the final day of high school sports in my area! It's practically a holiday for me and I've been celebrating all day. Bring on the easy season! It's time for Cardboard Appreciation. This is the 257th in a series): 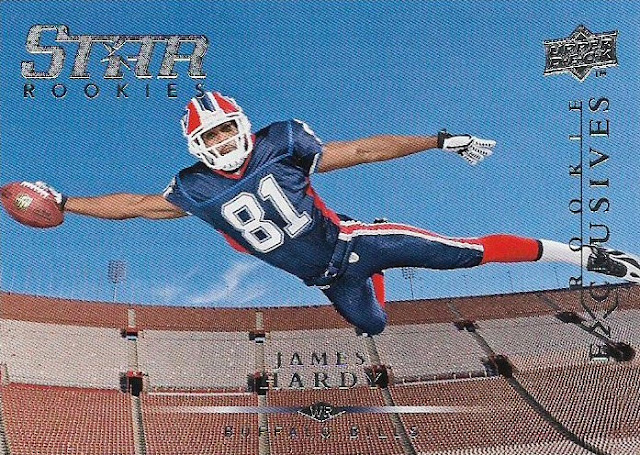 I don't know if you heard about the sad story of former NFL player James Hardy last week. He was found dead in a river in his native Indiana at the age of 31.

When I read about it, my mind went to this card.

These "superman" poses that often show up on football and basketball cards do look impressive, but there is a part of me that is disturbed by them. I've written at least a couple of blog posts about how I don't think enough attention is paid these days to the fact that athletes are human.

Here is the only time we are made aware that pro athletes are human beings:

1. We know them personally.
2. Someone in the media compiles a human interest/profile story on them.
3. They are caught doing something wrong.

The rest of the time athletes are promoted as super heroes. This is particularly true for football and basketball, but I see it creeping into other sports. Sports cards increasingly portray athletes as otherwordly through poses or card enhancements. The broadcast media went off the rails in this area a long time ago. Professional teams tout their athletes as almost perfect through social media. And the athletes themselves are now barely relatable because of their salaries, gated communities and celebrity-style social status.

Once, the back of players' baseball cards noted that Joe Athlete worked at a gas station during the offseason. That doesn't happen anymore. Because Superman doesn't pump gas for other people.

James Hardy was not Superman. He grew up in a broken family and was living on his own as a teenager. Football looked to be a way out of that terrible world. For awhile it was, all the way until he injured his knee while playing for the Buffalo Bills. He was out of the NFL less than five years after he joined and the remainder of his life devolved into arrests and mental problems.

In real life, Hardy didn't fly through the air to snare footballs one-handed. He was a broken man, very human, with one talent. He was no different than the rest of our broken selves with one talent. The problem is the NFL disposes of talent more callously than almost any other line of work.

Perhaps Hardy's story will make some fan somewhere look at the people who play these games for a living as more than a commodity or celebrity, as a human being, with real human life emotions and problems. I'm hoping that a reporter will think twice before describing an athlete's performance in exaggerated terms.

Yes, Aaron Judge can hit a home run nearly 500 feet. But I hope when he stops hitting home runs 500 feet -- and he will -- that people will treat him in the same way.

They probably won't. Those gas station days are long gone. Everyone needs a hero.

I'm just as guilty as everyone else.

I'm collecting little cardboard pieces of these humans (although I prefer to think I'm honoring, not worshiping).

Bo said…
Fortunately for Judge, every indication is that he is very grounded and has his head on straight. Even before he broke out you always heard about how he was like another Jeter in terms of mental make-up.
June 11, 2017 at 11:21 PM

Brett Alan said…
Tremendous writing. We certainly need to be reminded that our "heroes" are human...and so are our villains.
June 12, 2017 at 12:17 AM

Jamie Meyers said…
Well said. You're right, by the way, about the NFL discarding its talent callously. I know an ex-player and heard the stories for myself. I'm almost exclusively a minor-league baseball guy these days -- I hate the hype these kids have to deal with. Don't think its healthy at all.
June 12, 2017 at 7:21 AM

Hoarding Cardboard said…
Excellent words and true points. Very sad to hear about the loss of Hardy. Maybe someday it will all change.
June 12, 2017 at 7:24 AM

Matt said…
Very well written post. I've never been a huge football fan, but growing up in WNY I still followed the Bills and am saddened by the loss of one of "our own".
June 12, 2017 at 1:52 PM