June 25, 2017
(Damn, it's busy around here. I guess I spoke to soon when I said it was the start of the easy season. Maybe in another week I'll be able to roust up some solid posts here. But for now, it's Cardboard Appreciation time. This is the 258th in a series):

I'm a card collector, so I like to categorize things. And if I were to categorize the 1993 Upper Deck All-Time Heroes set, I would label it as "the classiest most difficult to store retro set of all-time."

How's that for a category?

The '93 All-Time Heroes set is a tribute to the famed 1912 T202 Hassan Triple Folders, one of the first sets to feature multiple big leaguers on one card. The 1993 UD set is 165 cards and features many players from the past, during a time when retro was just becoming popular with major card companies. It's also one of the few sets to trumpet a cause on the front of each card, promoting the Baseball Assistance Team, formed in 1986.

Each card is 5 1/4 inches long, which is not a nice thing to do to a group known for their OCD.

Fortunately, there are pages to accommodate these cards.

I recently received a few 1993 All-Time Heroes Dodgers from Jeffrey of Cardboard Catastrophes, and they were accompanied by one of the six-pocket pages made specifically for these cards.

The Joe Black card, I thought, completed the Dodgers team set for me. Teamsets4U.com lists eight players for the Dodgers and with Black's addition I had eight.

However, the Tommy Davis card in my collection is listed as an Oriole on Teamsets4U.

Probably because of Davis wearing an Oriole cap in the portrait photo.

That means I'm still missing one Dodger from the set. It's the Johnny Podres card. 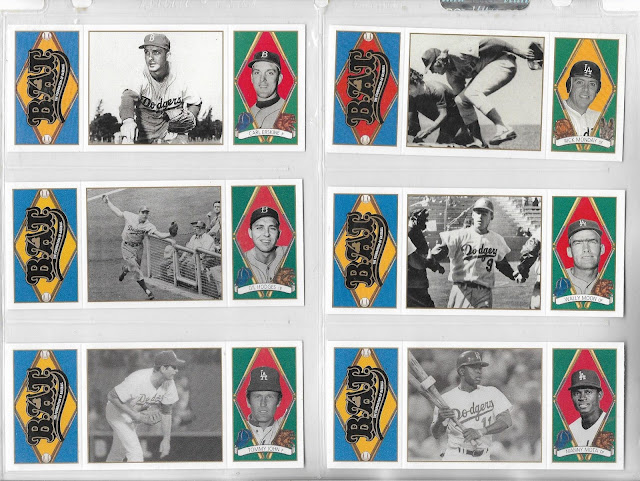 Here is a look at the other Dodgers in the set. Carl Erskine, Gil Hodges, Tommy John, Rick Monday, Gil Hodges and Manny Mota. (The center photo of the Monday card shows Monday as a Cub, saving the American flag from being burned by two protestors).

The other All-Time Heroes cards that Jeffrey sent are dupes, which means I'm very tempted to fold the sides in on some of those to create the booklet effect that was the key attraction of the original T202 Hassan folders.

For now, though, the extra cards are not folded.

We collectors with OCD need to move slowly.

Nick said…
I need to find some of those pages. All the ones I have are stuffed into a box on my dresser, and that's annoying because I have no way to allow these beautiful cards to see the light of day.
June 26, 2017 at 1:52 AM

ned said…
i love the card of Rick Monday saving the American Flag from those dirty stinky hippies!

night owl said…
I already compared it with Bob Lemke's Standard Catalog of Baseball Cards and they match up.
June 28, 2017 at 10:47 PM

Teamsets4u said…
I only put the cards on one team.
If they have different teams in the pitcures I have to make a choice.
It is a brutal set to checklist by team.
July 16, 2017 at 9:27 PM