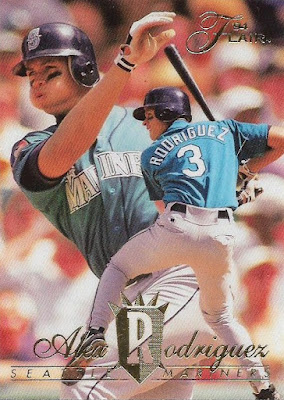 I have collected cards for most of my life, more than 40 years, with a few breaks in between. Collecting is a way of life for me and is ingrained in my thoughts and actions. It is such a part of me that I don't even realize how big of a card nerd I have become.

I am not the most knowledgeable collector around, far from it, but I do know a lot about cards. And because I've never been someone to give myself the benefit of the doubt, I just assume that everyone else knows about cards, at least a little. And if someone asks me about cards more than once, then, yeah, I'm assuming they know something about cards.

But I was reminded yesterday that civilians -- yes, I'm calling non-collectors "civilians," that's how immersed I am -- don't know squat about cards.

In the middle of a brutally long work day, I stopped at the post office to send off some card packages. I plopped six small mailers on the counter and the worker who is almost always there started asking me about cards.

We've talked about cards before. There are other people besides myself who come into this particular post office with cards to send. Most of them are dealers. The worker started talking about this one woman who ships out cards and he's talked about her before. I can tell she runs group breaks and he said she's always sending out big-dollar cards. He said lately the cards she's been sending have been even more and more expensive.

That's when I said something I shouldn't. I mentioned that some cards are soaring in price. You have to know which ones and it's not going to make you rich, but certain cards are definitely taking off in price in a way that I haven't seen in 25 years. I said all of this to him, thinking he'd know what I was saying.

I don't really like talking about "worth" when I discuss cards but with people with only a conversational knowledge of cards, sometimes you have to go there to keep the card discussion going.

"What about Rodriguez?" he asked.

Well now we were definitely going somewhere I didn't want to go. I never like discussing Alex Rodriguez. I don't like him. I don't like the Yankees. Please, no. But for the sake of the card discussion, yeah, OK, let's do it.

I hoped that was it and I hoped he wouldn't ask me "which ones are those?" I don't know a lot about cards from that time and all the elite/mirror/certified/rave/production line/artist's proof mumbo jumbo gets me confused.

But he didn't. Instead, he said, "hang on" and left to go in the next room. What the heck? There were people in line waiting behind me! And he wasn't done processing my packages. Have you noticed how long it takes to process each package lately? They have to confirm the street address with the zip code now? Gracious, what's that all about? Where is he going?

I heard him rummaging around in the next room. It sounded like he was looking through a gym bag. I heard unzipping and more shuffling. Then he came back.

And held up this card: 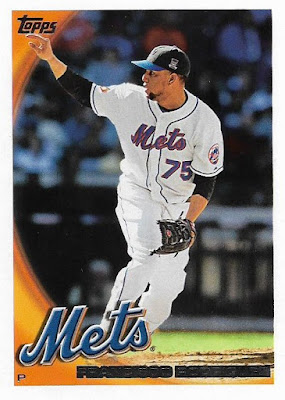 I stared at it in disbelief, and just so I didn't have to say too many words because I knew if I did I was going to start laughing, I simply said:

It sounds very dismissive. But at least I wasn't laughing.

That's not very understanding of me, but I was suddenly made aware of how much I knew and how little people who don't collect cards know. I was reminded again of that natural tendency among "civilians" to think every card they stumble across is worth some money.

I then mentioned that I was talking about Alex Rodriguez and he shrugged and said, "it was just something I had lying around with some other stuff."

That was the end of the conversation about cards, thank goodness. He went back to processing my mailers and I was happy because the people behind me had been very patient but I was certain they had quietly formed a lynching party.

I made my exit. And I thought,

"Next time I'm going to mention how that K-Rod may not be worth anything, but it does have value."

I'm going to make sure there's no one behind me in line first though.

Johnnys Trading Spot said…
Next time let him know just how many different players have sported the #75 on a baseball card.
June 16, 2017 at 8:06 PM

David said…
You nailed it on the head with your observation that "civilians" tend to believe that every card they stumble across must be very valuable. When a woman I know learned that I was a collector, she asked me to look at her son's collection and estimate its worth. This was maybe 15 years ago and her son had about 1,000 beat up cards from 1989 and 1990, mostly Donruss. I tactfully explained that although these cards held no real monetary value, they would doubtless be valuable to her son in sentimental terms. I think she was disappointed.
June 16, 2017 at 9:52 PM

Billy Kingsley said…
Almost every single time I post something card related on Facebook somebody asks me "what's it worth"...and when I tell them I neither know nor care and I will never sell it they seem to take it as a personal affront for some reason.
June 17, 2017 at 1:21 AM

Matt Prigge said…
When I was younger, my dad occasionally sold sports gear at swap meets, etc. And in exchange for helping at the table, he let me have an area to sell some excess cards. Once a woman came up and told me she had some very valuable cards from the 1910s and was hoping I could give her a better idea of when they were from and how much they were worth. I'm like, 13, so my dumb ass expects her to start pulling out t206s. Instead she goes into her bag and pulls out a coin purse (yes, she kept these 'very valuable' cards in a coin purse) and removed a small stack of the early 90s Conlon Collection cards. She was crushed when I told her they were only a few years old and worth no more than a dime each.
June 17, 2017 at 11:27 AM

Fuji said…
Met a few "civilians" at the flea market this morning who thought their late 80's McGwire and Cansecos were worth their weight in gold. Didn't even bother to argue. I just smiled and said "thanks, but no thanks".
June 17, 2017 at 12:34 PM

Jeremya1um said…
I recently went to an antique shop that sold cards with my step father. They had early '90's Fleer Mattingly and Strawberry inserts priced at 5 bucks each and I think both him and the lady selling them thought they were actually worth that much. I tried to talk him out of getting the cards but he was ok with helping them make a little profit so I guess it was fine, but I kind of wish people would do their research before they list cards at such high prices and wouldn't assume that every card is worth a ton of money.
June 18, 2017 at 9:55 PM

CaptKirk42 said…
Yep "Civilians" and "Investors" just about every collection type hobby has them. And just about every hobby had some kind of "junk wax years" usually around the 1980s to 1990s. I think it is because in the late 1970s people were looking at the vintage cards, toys and antiques from the 1950s and earlier that were valuable and becoming more and more valuable as the years pass. Then looking at the current equivalent piece and seeing how affordable they were by the dozen and by the case they saw only dollar signs and thought investing in them for 20 or 30 years (around about now) that they would be worth a fortune. unfortunately they were produced by the thousands of tons and thousands of people invested in these tens of thousands of cards or whatnots making them all worth absolutely nothing, well OK maybe 1/1000 of a cent.
June 18, 2017 at 10:03 PM