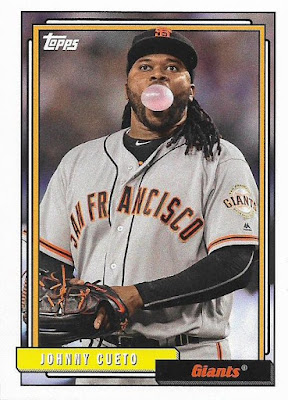 To me, they seem to be one and the same. They go together. That old commercial jingle got it wrong. Apple pie? Who eats apple pie at a ballpark? "Baseball, hot dogs, bubblegum and Chevrolet" is how it should read.

For at least as long as Topps and Bowman have been around, there's been gum at the ballpark. Card companies that also pedaled in gum made sure it was available to players. A player blowing a bubble was considered free advertising.

But try to catch a bubblegum bubble on the front of a baseball card prior to the 1970s. I'm almost certain it doesn't exist. A wad of tobacco chaw in a cheek is much easier to spot on cards between 1951-71. I know, I've looked. There are more tobacco chewers in the first 30 cards of the 1960 Topps set than there are gum chewers in the entire 572 cards that year (2-0 is that score).

That is completely ridiculous. Don't we call these little pieces of cardboard "bubblegum cards?" Yet, there was no bubblegum in those pictures?

The major reason for that, I believe, is that tobacco simply was the chew of choice for years and years in baseball. Baseball cards weren't packaged with gum way back when the 20th century was shiny and new. They were packaged with tobacco. Old habits die hard in baseball, even nasty, disgusting, unhealthy ones. You were almost required to chew tobacco to fit in with your teammates.

Also, gum-chewing, and especially bubble blowing, was perceived by the baseball crowd as lackadaisical, unfocused, less than serious. Bubble blowing makes a player appear carefree, relaxed. But nobody wanted players to look carefree and relaxed back in the 1950s. Or at least the managers didn't. The late Bob Lemke dug up an article about the bubble blow up that occurred when Mickey Mantle was spotted emitting a pink bubble from his mouth. The media thought it was delightful and Mantle's picture appeared in all the papers. But manager Casey Stengel was enraged. Scandalous! The Mick wasn't taking the game seriously!

Today, it's difficult to understand why that was such a big deal. Gum is much more prevalent than tobacco on MLB fields these days and players can be spotted blowing bubbles daily, before cameras and everything. 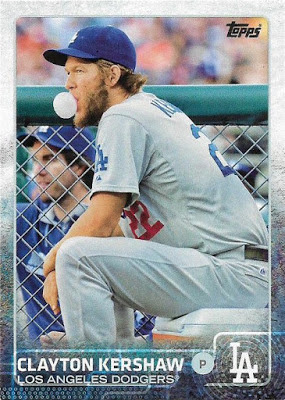 The art of bubble blowing was even made into an insert set in last year's Topps Opening Day set.

Gum bubbles have appeared in sets regularly for the last 30 years, boosted by prominent 1990s card companies like Upper Deck and Pinnacle, and prominent baseball cards like ... well, like this: 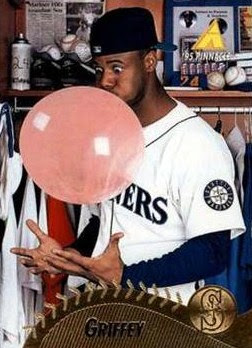 So when did the change begin? That's what interests me. Sure, I know there was no gum on cards for ages and a lot of gum on cards in the last 25 years. But when did it start?

On the field, people credit "Big League Chew," the gum product developed in part by former pitcher Jim Bouton in the late 1970s that resembles a tobacco pouch but actually produces shredded gum. Players were weaned off tobacco and onto gum during the '70s.

On cards, most would credit the famed 1976 Topps Bazooka Bubblegum Blowing contest card: 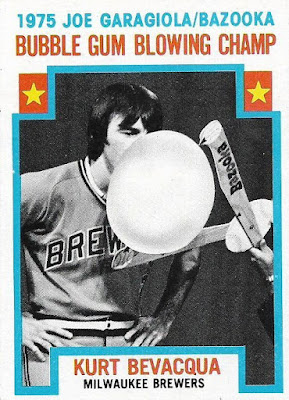 A classic, no doubt. One of the best cards there is, for my bubblegum money.

But this is not the first appearance of a bubblegum bubble on a baseball card.

In the 1975 Topps set, Bert Blyleven is shown blowing a bubble in the dugout. It's one of my favorite cards from that entire set.

But, still, that isn't the first appearance of a bubblegum bubble on a baseball card.

Well, I will show the following card while saying I have not looked at all of the cards issued prior to the arrival of this card. There could very well be another earlier card with a player producing a bubblegum bubble. But until I get paid for unearthing stuff like this -- or until someone else does their own damn research -- this is the first official moment in which a player is shown producing a bubblegum bubble on his card: 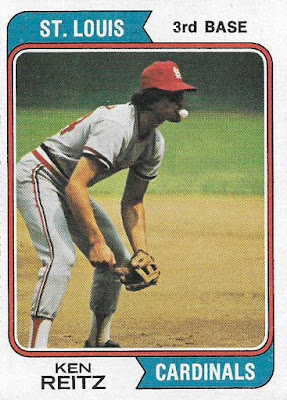 If indeed this is the first moment of a gum bubble being born on a baseball card, I think we owe Ken Reitz a plaque or a trophy or our debt of gratitude or something -- maybe a bucket of Bazooka.

Without Mr. Reitz would we have this? 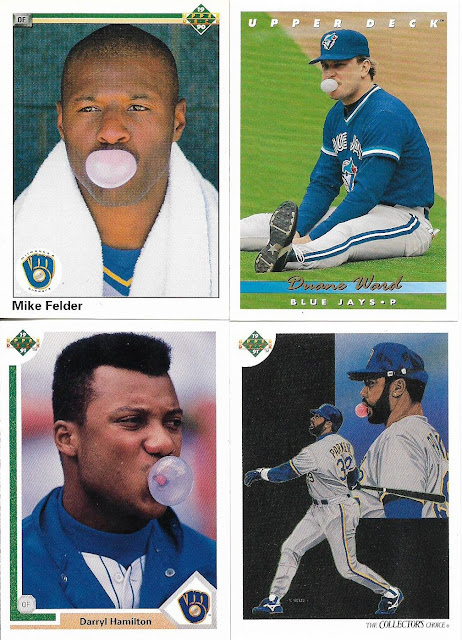 There are many collectors who compile "bubblegum blowers" mini-collections. Seeing a player blowing a gum bubble is fun. It is evidence of what we most like about the game -- it's fun.

Chewing and spitting and brown stains on your uniform pants? That's not fun.

I'm so glad we came around on that.

Let's all think of Ken Reitz the next time you see a ballplayer blow a bubblegum bubble.

BobWalkthePlank said…
It would figure that Kershaw's bubble looks perfect. That guy can't do wrong. Ken Reitz needs to practice.
June 27, 2017 at 8:32 AM

Matt said…
I'm tempted to start a petition to have bubblegum blowing contests part of the All-Star Game festivities. Bevacqua has held the record for too long. (At least, I'm guessing he still holds the record...)
June 27, 2017 at 1:22 PM

BaseSetCalling said…
put me down as a bubble gum fan. Adam Jones is good for such cards.

the best are "In Action" bubble gum blowing cards, where the ball is in play but someone is still blowing a bubble