I pulled my first buyback the other day

June 07, 2017
I don't have a lot of use for the buybacks that Topps has been putting in its products the last few years.

To me, stamping an old card is completely unnecessary. If you want to wow a collector with a 30-year-old card then just put the damn card in the pack. You don't need to deface it.

But, somehow, by stamping cards, and stamping them in different colors, Topps has convinced some collectors that they have something special. I don't get it. I'll never get it. Don't bother explaining it to me.

The reason why I collect the 1975 Topps buyback cards is because I want these buybacks to have some meaning. This is the only way I can think of where they have meaning, by trying to complete a set of them -- or at least as many of them that exist from a particular set.

I've formed this thought process all without pulling a single buyback card. Buybacks, for the most part, are inserted in hobby boxes. I don't know why, maybe so shop owners and dealers can tout them as "hits"? And since I don't have a suitable hobby shop near me, that cuts down on my ability to pull a buyback. I'm not in the habit of ordering hobby boxes online either.

So how do I know how I'd feel about pulling a buyback? Maybe I was wrong in my preemptive analysis. What would happen if I discovered a buyback in my pack and I actually liked it?

Well, the other day I got to find out the answers to those questions.

My wife brought home a pack of baseball cards from her sister's house. Her sister had bought another pack for me. It was a common, ordinary 2017 Topps Series 1 flagship pack. I have no plans to open any flagship for the rest of the year, except to use my coupon on Series 2. So I wasn't too thrilled with this pack at all. The 2017 design is interesting and uplifting only if you compare it to the set that came out the preceding year. Otherwise it's boring and a little bit depressing.

But let's open the pack so I can finally get to the point: 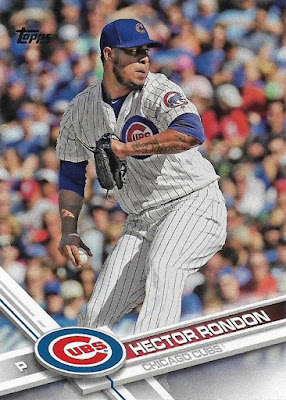 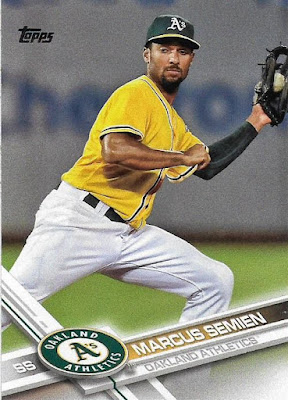 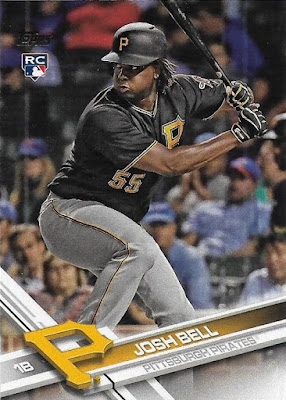 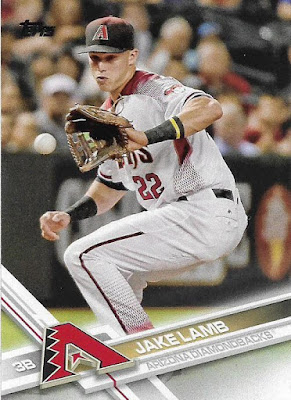 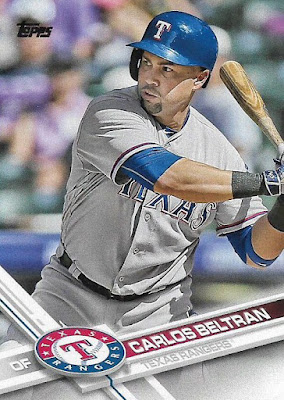 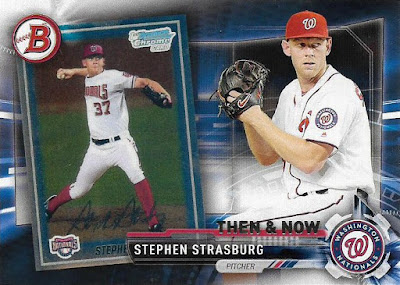 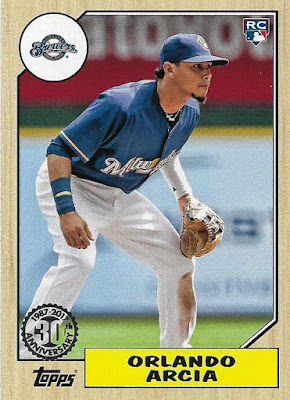 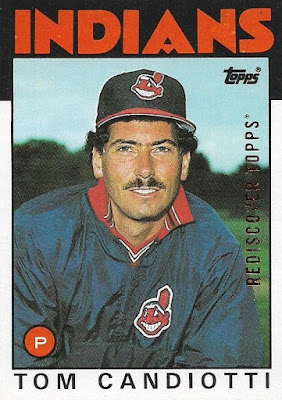 So in trying to capture my immediate thoughts when I spotted this buyback, I admit that it was nice to see a 1986 design pop out of a 2017 pack.

That was diminished somewhat by the 1987-themed insert card that arrived immediately before Candiotti, but still it was nice to see some color after all of the gray of 2017.

My next move was turn the card over because I didn't remember this card from the 1986 Topps set, which I have completed. Sure enough it was a card from the Traded set.

And I became immediately disgusted.

I need that Candiotti card for the 1986 Traded set! Oh, I'm not really attempting to complete it or have any real plans to in the future, but every card set from this time period is one that I eventually would like to complete. But now it's just a card with a "Rediscover Topps" stamp -- and there's no way I'm looking up what a bronze stamp means.

It's not a real big deal. I can go out and find the 1986 Traded set -- unstamped -- easily enough. I'm just trying to chronicle my immediate gut reaction. And, as a set-collector it was "Hey! A buyback ... ugh!" 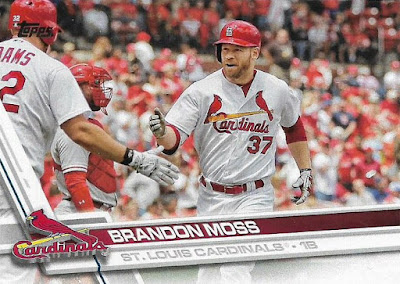 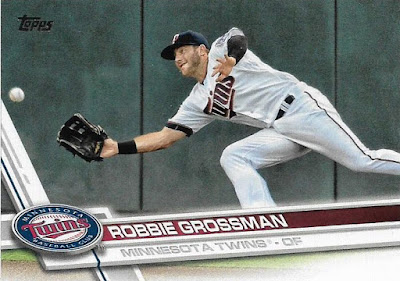 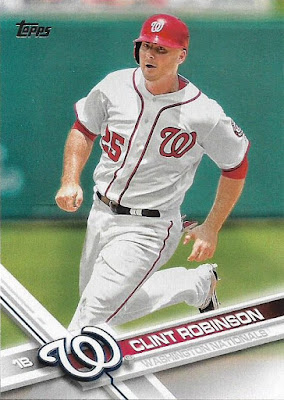 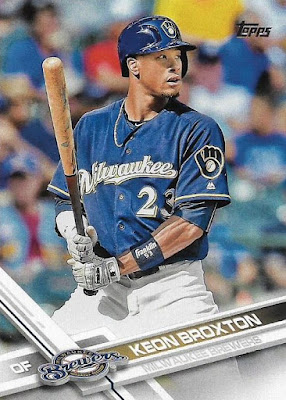 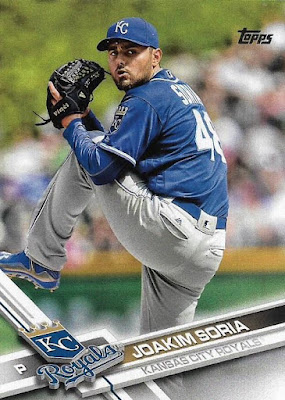 acrackedbat said…
nice of your Sister-in-law to think of you with a pack of cards. I haven't pulled a single buy-back and kept it. I want vintage cards unstamped, and cards of recent years nowhere near a new release. As long as we buy the product, card companies will keep filling it with crap. They know us far too well. :/
June 7, 2017 at 8:15 PM

Anonymous said…
Impulse-purchased a $5 Target pack (I don't care about inserts) and found a 1971 buyback (Ken Harrelson) inside. I still don't know how I feel. At least with the junk-wax era buybacks you know this is just another variation from the millions they printed. The 1971 card though would've been cool for me to pull when I was collecting as a kid ~1990 so after the excitement of something I never saw when I was little that damn stamp was sitting there making me feel kind of depressed.
June 7, 2017 at 8:28 PM

Johnnys Trading Spot said…
I second what Mike said. Other than a Brave, or PC or other collection of mine, forget about it. I agree with you Greg, just put the DAMN thing in the pack un-stamped or marked in any other way!
June 7, 2017 at 9:21 PM

flywheels said…
Rey Ordonez has ended up with at least one Rediscover Topps card (that I know of) and now I'm chasing the dang different colored stamped parallels! When will this ever end?!
June 7, 2017 at 10:25 PM

Fuji said…
Back in 1991 (maybe 1992), I pulled a buyback card out of a pack of Topps. It was a 1970 Topps league leaders card. The idea of pulling a twenty-something year old card was pretty cool. However since it wasn't stamped or anything, there wasn't any proof that I had pulled a buyback.
June 8, 2017 at 12:10 AM

Commishbob said…
In 2011 I when I was blogging the '59 Topps someone sent me a Stu Miller buyback from that set. I was blown away. I had no idea that there were such things. I keep it in the set binder along with some variations and Bob Lemke faux 59s.

Most of the ones I've come across since are cards I threw away the first time I had them when we needed my room for a nursery. I pass those on to the guys who collect 'em.
June 8, 2017 at 1:41 AM

night owl said…
I suppose that's a way to look at it, if you want proof you pulled a buyback, it has to be marked in some way. But why can't they mark it in semi-small type on the back like a serial number?
June 8, 2017 at 10:25 AM

Fuji said…
That would have worked. Anything from Topps would have been appreciated. Honestly... I didn't even think about that card until your post, so I guess it didn't bother me that much.
June 8, 2017 at 11:05 AM

Anonymous said…
I've never considered what I would do if I pulled a "need" as a buyback.

CaptKirk42 said…
Stamped Buybacks disgust me. I wish they still did the unmarked thing like Fuji mentioned. Especially for anything pre junk years. Maybe someday I'll drink the buyback Cool-Aid like I did with reprints some years back. Reprints are an affordable way to get cards that ordinarily are out of the common collector's price range. I guess stamped buybacks are a cool variant for some collectors to pursue. So far I don't have any buybacks, knock on wood I never will.
June 8, 2017 at 2:46 PM

Kevin said…
They are doing this with Bowman packs and i pulled a 1991 Bruce Hurst the other day and my reaction was disappointment. It was an awesome shaped card and I wouldve rather have had that with no stamp on it.
June 11, 2017 at 2:19 AM