What am I waiting for?

June 05, 2017
I am not poor or disadvantaged. But watching how I spend my money has been a necessity most of my adult life. I work in a business with an average salary that would make a teacher snicker. Counting dollars is a way of life.

Year after year after year I've done that, the budget always hovering over my head constantly, a presence, always there. Some would call it a struggle. But I've always been a nose-to-the-grindstone person. Just get done what you must to get it done. Go without if necessary. The name of the game is to live. We'll get to that other stuff if we can.

I've sacrificed without calling it sacrificing. Scrimped without knowing I was doing it. Declined with barely a pang of sorrow or guilt. It's just the way it is in a middle class life.

If you're lucky, as you get older, the budget crunch loosens ever so slightly, and it has for me. I'm not buying jets or flying all over the world, but it's nice to have a few extra dollars without worrying that it should go toward something more important/boring.

But still, the mind-set I've owned ever since I ventured out on my own remains. I hold on to money. I dismiss opportunities to purchase certain cards because spending wouldn't be "wise." I'm stuck in the frugality that has worked so well for me and my family.

Recently, I've begun to break out of that. Just a little.

I've basically asked myself "what am I waiting for?" There's a little extra cash now. Use it before you lose it. Who knows when the next ailment/accident/requirement is coming?

And I've started calling the cards that I'm now obtaining "what are you waiting for" cards.

Meet my latest "what are you waiting for" card. It arrived today. 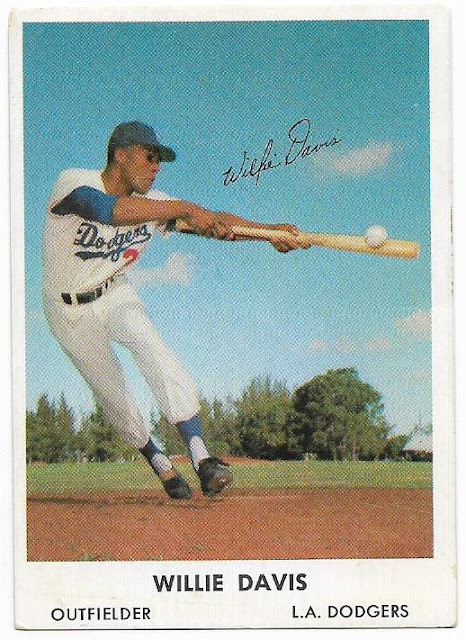 I have pined for this 1962 Bell Brand Willie Davis card for some time. Not for ages, simply because I don't think I was aware of the card until two or three years ago. But it's been a dream card.

Ever since I first stumbled across it, I have been amazed.

It was a card so special that I actually created a copy of an image I saw online and stored it in my scans, just so I wouldn't forget about it. It would always be there like a distant goal. There it is in my folder of scans. I get to delete that image now!

The Bell Brand Dodgers -- and I'll say this again, the most marvelous cards to ever come out of a potato chip bag -- have always been beautiful. But I like the '62 set in particular because of the interesting camera perspective, the distant trees in the background.

The Davis card is more beautiful than the rest, as it shows the collector a young Davis in the midst of a drag bunt. I don't know how this was actually captured. Did they glue the ball onto Davis' bat, a la the 1952 Topps Gus Zernial card?

But this is a question I can ponder while I hold this card in my hand because it's now mine. 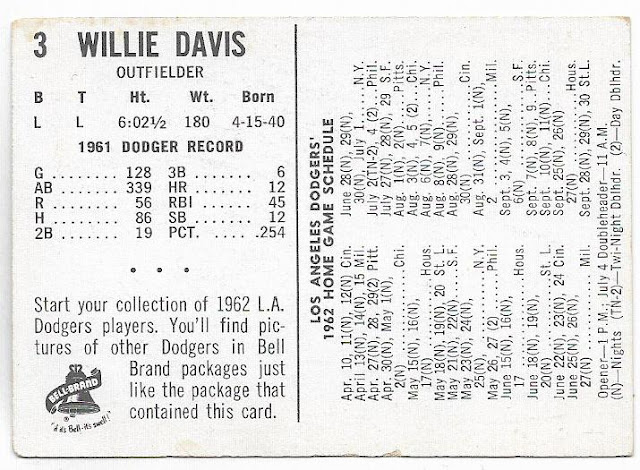 That is the back of the card, although I'm suddenly aware that I oriented it incorrectly. 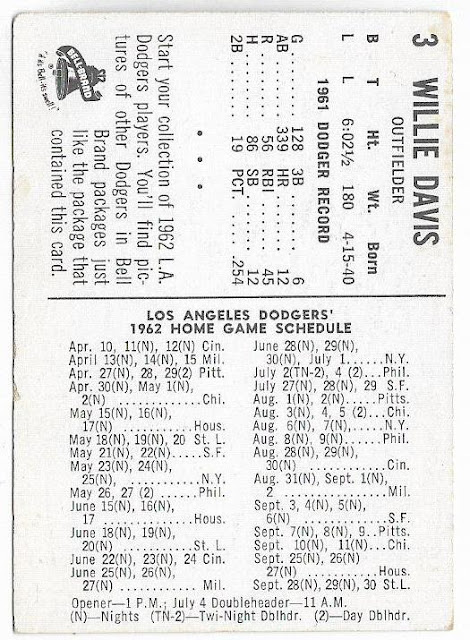 There you go. Underline that June 30th date against the Mets. That's the day Sandy Koufax records his first career no-hitter.

I will never have enough money to own even a third of the cards that I want. But I've made my peace with that, as well as the ownership of many other material goods, a long, long time ago.

But I will continue to scope out "what are you waiting for" cards, and, when I can, finally pull the trigger on them.

Because like my grandmother used to say, "when it's gone, it's gone."

shoeboxlegends said…
Yup, I don't recall ever having seen this one, great card! Well worth whatever you paid, congrats.
June 5, 2017 at 8:55 PM

GCA said…
I'm right there with you. I paid my car off in October and my dog passed last year. The extra cash from just those two things has been a windfall to my collection. (Read ~ I have no life otherwise). Just waiting for the car to blow up or crash. (And thinking about the next dog).
June 5, 2017 at 9:22 PM

Nick said…
Beautiful, beautiful card. No sense waiting around for that one.

It's been interesting tracking my card spending ever since I landed my first full-time job a couple years ago. It's nice to have extra money in the bank, but too often I found myself making frivolous purchases (example: repack after repack after repack, or from time to time those team sets they sell at Target/Wal-Mart) for no other reason than I could afford them. I'm a bit better at bypassing the card aisle these days if there's simply nothing I'm dying to have, but the thought still runs through my head.
June 6, 2017 at 1:45 AM

Stealing Home said…
I know that frugal mindset.I grew up dirt poor (meaning we couldn't even afford dirt). Then I had a job making very good money. I was still watching every purchase like I was still poor. That job went away and I returned to counting every penny so as not to lose a single step I made for myself and my family.
Now it's my old lady who's making good money, and I've adjusted my thinking, just as you're doing. I'm allowing myself a fun purchase or expenditure every now and then. Now I'm just waiting for Wednesday, so I can go to the ballgame.
June 6, 2017 at 5:16 AM

BobWalkthePlank said…
Sometimes you have to treat yourself! Congrats on the new addition.

Fuji said…
Damn that Davis is beautiful! Congratulations on adding it to your collection. As a teacher, I understand budgeting and being frugal. The past few years, I've finally been able to build up my savings and start picking up some "what are you waiting for" cards myself. Although I'm pretty sure I'll never own the 48L Jackie Robinson that's at the top of my wantlist.
June 6, 2017 at 2:38 PM