Are you ready for some MORE football? 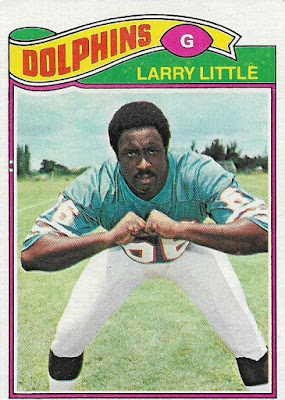 My favorite time of year begins today. It is always the day after the NBA championship game. That game -- of which I care nothing about, your endless prattling about LeBron V. Jordan, etc. is lost on me -- clears the schedule for baseball.

From now until that depressing period around late August, there are no NBA games. There are no NHL games. No NFL. No college football. No college basketball. Baseball, by far my favorite sport, takes over and is king for a little more than two months. Any other sport going on at this time -- golf, tennis, auto racing, soccer -- can't touch baseball in terms of coverage. And I get to focus solely on my undying love with minimal distractions.

This takes on extra importance because of my job. September through early June is cluttered with too many sports. It's impossible to concentrate on them all and there are constant complaints that "you aren't paying attention to MY sport." That all goes away in mid-June, replaced by gentle breezes, sunshine and a day at the ballpark.

So, why the hell am I showing football cards for the second time in three days?

What can I say? My collection is turning its nose up at the calendar. I collect what I want when I want. So get ready for some 1977 Topps Football!

In a back-and-forth transaction with GCA of The Collective Mind, I landed a few items -- the baseball ones you'll see in the next day or so -- that included nearly 100 cards from my all-time favorite football set. 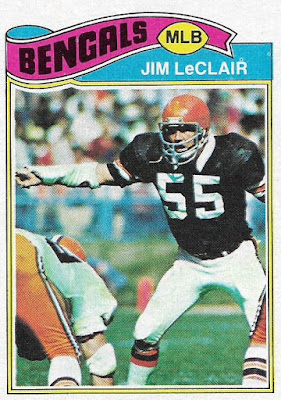 I like 1977 Topps Football for the same reasons I like 1975 Topps Baseball. It's bright and colorful and I collected it as a kid.

The '77 football set is the first football set that I collected more than a handful of cards. I owned maybe a pack's worth of '76 Topps football cards and maybe one or two '75 football cards (the 1975 Alan Page was my all-time favorite football card then). I came to football rather late. The first Super Bowl I remember seeing was the Raiders and Vikings in 1977, almost 2 years after I saw my first World Series.

Football cards were somehow meant for older, rougher boys. Boys who would think nothing of punching their friends just because.

That changed in '77 and I caught the football card fever. I didn't start punching my friends but I did buy a fair amount of '77 football. Maybe about 200 cards. I loved them all. 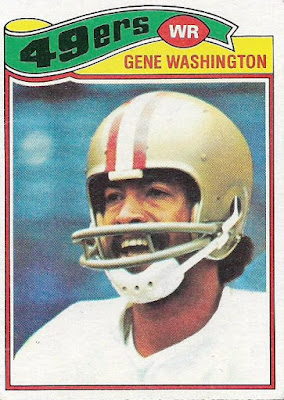 This is a card I remember owning. The looped banner is the star of this design and I was attracted to the three-color combination. The element that stands out the most now -- the obviously airbrushed helmet -- sailed over my head like an errant pass. (I've mentioned before that I was kind of aware that something wasn't quite right with the photos, but exactly what didn't dawn on me). 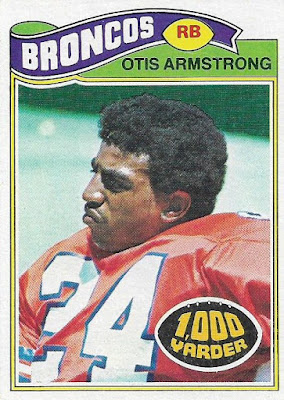 Another card I owned. My knowledge of football was minimal. I didn't know what a 1,000 yarder meant. I knew it was good, and I loved having a card with a guy with a 1,000 yarder logo on the front. Didn't care enough to figure it all out. 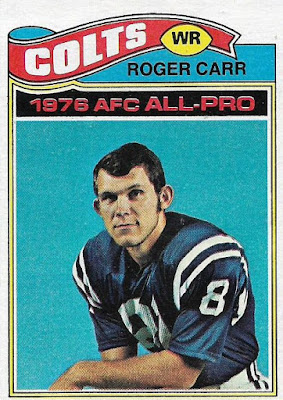 "All-Pro" I knew. I could see the similarity to the 1977 Topps baseball All-Star banners. And it was just as big a deal to pull the All-Pro cards as it was to pull the All-Star cards. Roger Carr seemed like a nice young man posed in front of a blue wall. 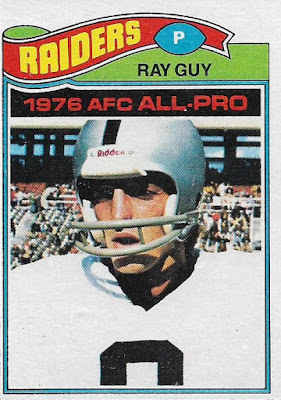 The photos really leave something to be desired in this set. At the time I thought Ray Guy was the coolest player because of this card and the All-Pro banner. But what a terrible photo. And, granted, he's the king of all punters but he's still a punter. Did I know what a punter was? Nope. You could've told me Ray Guy ate quarterbacks and I'd believe you. 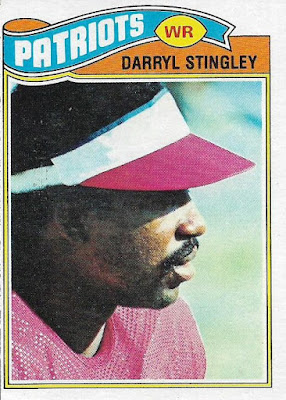 When Darryl Stingley was paralyzed by a hit from the Raiders' Jack Tatum in 1978, my mind went to this card of him. By '78 I was starting to know the players and connect them with their cards. Meanwhile, I had entire baseball teams memorized by '78. 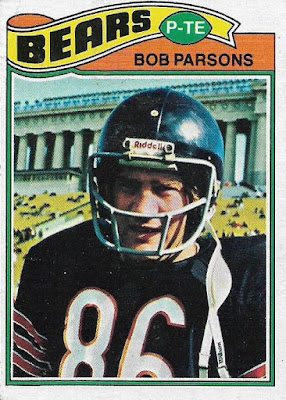 The following cards are cards I did not see in 1977 and I'll give my "40 years later impressions" now.

The Chicago Bears cards are actually made cooler by airbrushing the "C" off the helmets. And if the columns in Soldier Field make an appearance in the background then you now appear on the best card in the set. 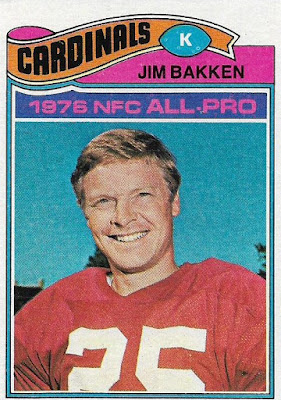 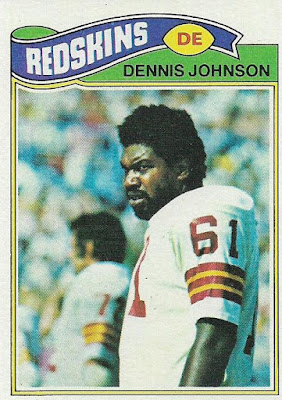 When we are advanced enough as a society so we can photoshop faces onto our own face, I'm getting this one on my face. This is the look I give everyone and everything at least 10 times a day. It would be far more effective with Dennis Johnson's face. 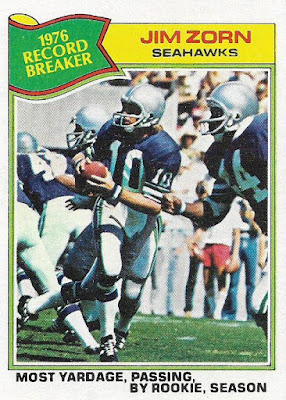 Yes, Jim Zorn's name was as cool as you would think it would be if you were a kid collecting football cards. 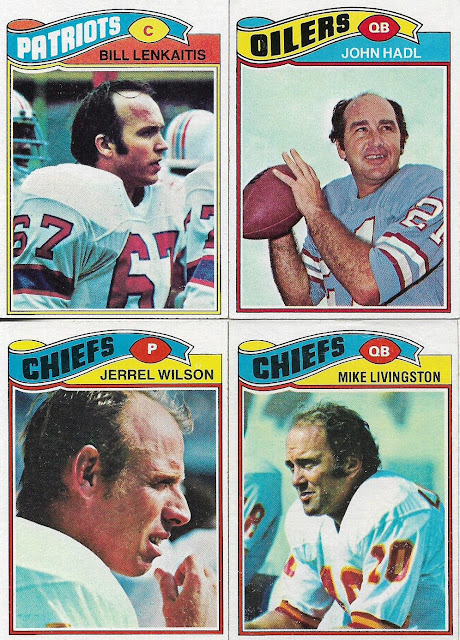 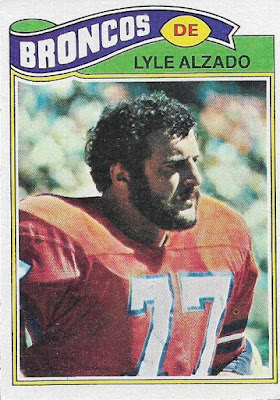 I remember reading an article about Lyle Alzado in my uncle's piano studio while waiting to take a lesson. I don't remember the magazine -- Sport, Inside Sports -- one of those -- and now I'm realizing I was actually reading a story on John Matuszak. 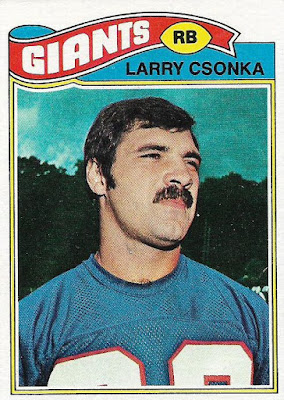 I associate Larry Csonka with the Giants, because of when I started following football. But I try not to mention that to Dolphins fans. They might get as annoyed as I get when someone says to me, "I know Ron Cey as an Oakland A!" That's just aberrant behavior. 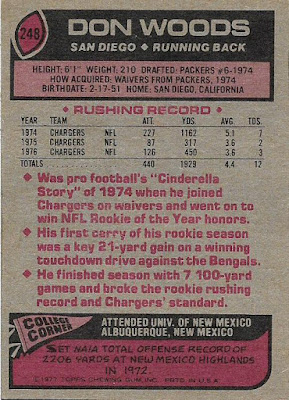 The one drawback of the 1977 Topps set is a familiar one for '70s card backs -- those card numbers are brutal to read. Looks fine on the scan, but try to read that dark type on a dark background in Northeastern daylight with middle-aged eyesight. My want list will soon be a disaster. 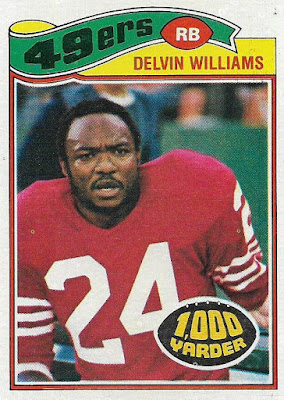 To me, this is what the 1977 Topps Football set is all about. Colors everywhere. A fat, football-shaped logo. A pissed-off football player. You can't beat it with any other football set.

As I continue to gather cards from this set, you probably won't see a lot more posts about them on the blog. I think I've summed up everything I have to say about them with this post and a couple of the previous ones.

All you need to know about '77 football for me is that its the 1975 Topps baseball version of football -- on a much more modest scale, of course.

After all, baseball is king. Especially at this time of year.

Fuji said…
I'm with you 100%. I can't wait to hop into my car tomorrow morning, drive to work, and finally listen to sports radio focusing on A's and Giants baseball. I'm so sick of listening to 99% Warriors radio.

BaseSetCalling said…
I too have about half of this set and when I can dig it out someday I will help you with yours. And I also neither knew nor cared that the logos weren't on the cards. I like 75 a little better with the banner and more action shots, and I like the year with the goalposts too.

But overall, these were guys on TV! And I had a Black&White TV, so full color football cards were hard to beat. Looking back, seeing the guys without their helmets is a little more humanizing.

I would kind of like to discover some retro issues of these designs in the 21st Century, but I can hardly follow Football any more, knowing what happens to the players later in life. The All Baseball time of year is indeed the best time of year.

For the 77 set, I somehow acquired sheets of checklist cards and I dutifully cut them apart and used them. Complete plain jane cards though, just a checklist with a white back.
June 14, 2017 at 1:04 PM

AdamE said…
My favorite was always 78 for some reason. Don't know why it's kind of blah now that I look at it.