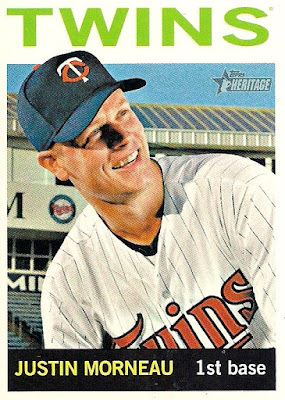 I am a bit embarrassed to admit that although I live about a half hour from Canada, it has been years since I have visited. That's what happens when a busier lifestyle, combined with less money and more aggressive border regulations conspire.

During the '90s and early 2000s, I traveled north of the border quite a bit, both for business and pleasure. And I can recall good times in Montreal, Kingston, Niagara Falls, Ottawa and Toronto. A number of years ago, I spent one Canada Day -- which Canadians are celebrating today -- in that nation's capital.

But I've addressed Canadian thoughts before. What I'm doing here is digging out my favorite baseball cards of Canadians and putting them on a team together.

This is a slightly more difficult task than if these were hockey cards. But an increasing number of Canadians have reached the majors in the last few decades and I can fill out a basic squad with not too much trouble. 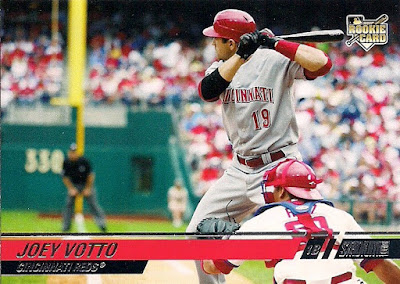 This is a reminder, 2015 Stadium Club fans, that 2008 Stadium Club was pretty great, too. A lot less friendlier to collect, but still awesome to view. 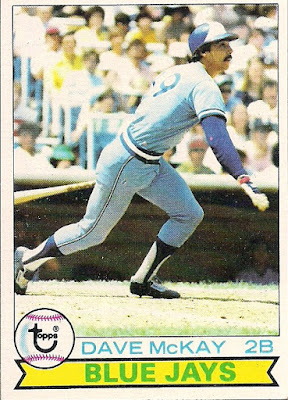 This card is here because it lists McKay at second base, but it's not the reason why McKay is on this team. 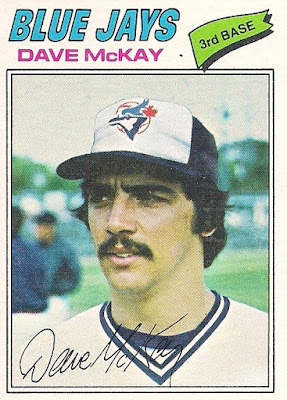 This is why he's on the team. This is one of the first Blue Jays cards I ever pulled (the '77 Jim Mason was the first one). And even though McKay is airbrushed out of a Twins uniform, I've liked this card for a long time. McKay is the first Canadian to play for the Blue Jays and was in the lineup for Toronto's first game, where it snowed, appropriately. 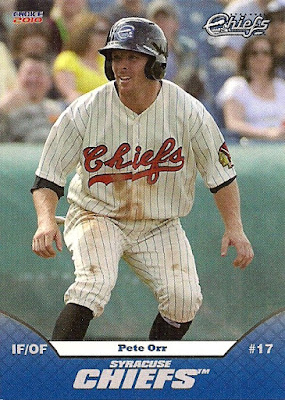 I have major league cards of Orr, but I thought it'd be more appropriate to show him on a minor league card. Orr has been playing pro ball since 2000, and he's still plugging away in the Brewers' farm system. He's played for nine different minor league teams. The "IF/OF" designation sums it up. He's my shortstop. 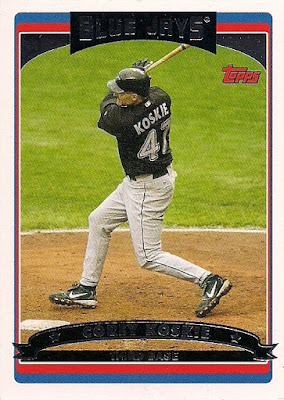 This isn't the greatest card and it's also evidence that finding Canadian infielders is the trickiest part of this team. But Koskie is here for the card back: 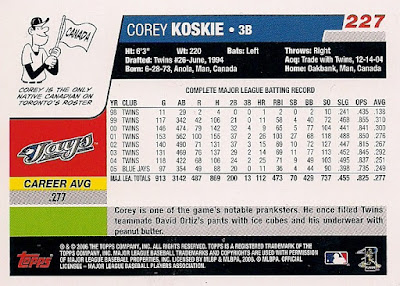 A Canadian flag (I guess the cartoonist couldn't draw a maple leaf) and the dude put peanut butter in David Ortiz's underwear! 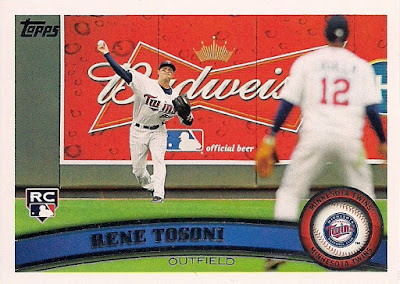 Tosoni hasn't played in the majors since 2011, but he's here because of the blatant Budweiser ad. Although Topps could have at least photoshopped a Molson ad in there for the guy. 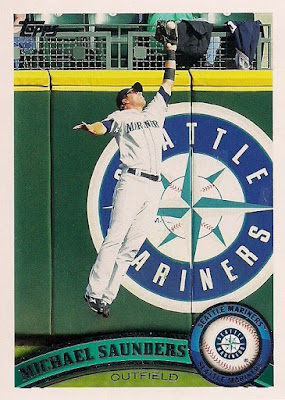 This card, and 2011 Topps in general, doesn't get nearly enough credit. Look what's going on here. 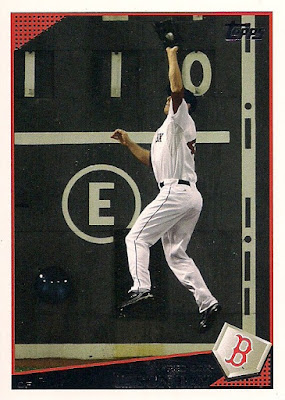 As you can see, Canadians, the outfield and advanced photography equipment can make great baseball cards. 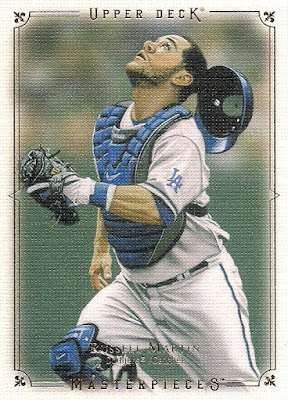 This remains my most favorite card from 2008. 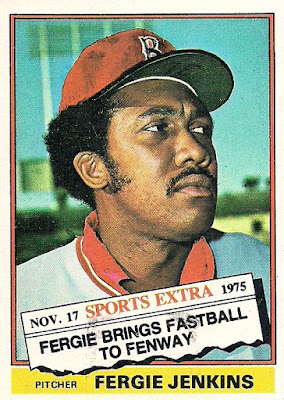 I threw you a curve with this one, but, yes, this airbrushed monstrosity is my favorite Fergie Jenkins card. Only a kid in a Red Sox household growing up in the '70s would understand this. I didn't know Jenkins as a Cub as a kid. He was a Texas Ranger who the Red Sox had acquired during the offseason after their World Series appearance. Boston fans were excited. We were excited. This card represented the opportunity to see Jenkins in a Red Sox uniform, no matter how horribly it was painted. 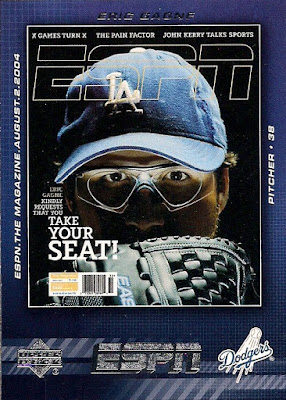 As a Dodger collector, I have a load of Eric Gagne cards. Sadly, too many of them are very similar. This one is not, which is why I practically jumped to buy it a couple of years ago. ESPN can do something right when it wants to.

And that's your all-Canada lineup based on my favorite Canadian player cards. 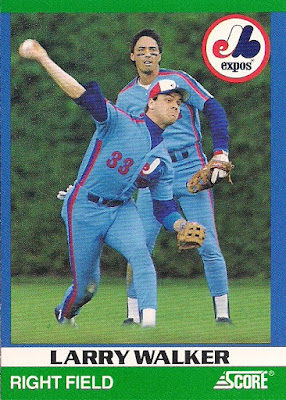 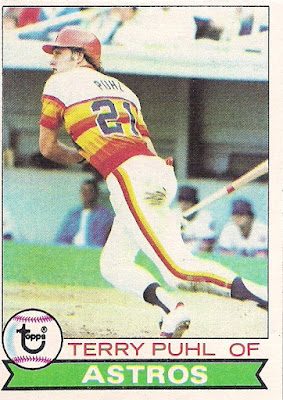 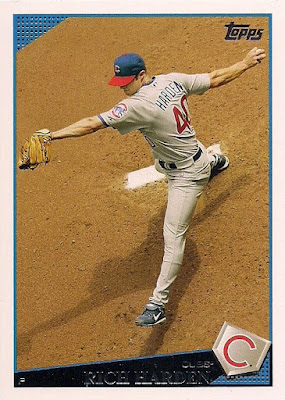 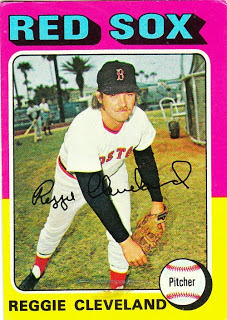 ... plus Justin Morneau at the top of the post, along with a host of others.

Even after all these years since purposely drafting Rheal Cormier and Paul Spoljaric on my fantasy teams -- and failing miserably with both -- I still have a soft spot for Canadian ballplayers.

Tony L. said…
One of my favorite baseball experiences was visiting Toronto and going to all three games of an otherwise meaningless, crappy series in May of 2008 between Kansas City and Toronto at Rogers Centre. It was actually my first trip to Toronto, and I found that I really loved and enjoyed the city of Toronto.
July 1, 2015 at 9:22 PM

Unknown said…
I realize you already had two Twins cards in your list, but how DARE you show Koskie in anything other than a Twins uniform! I kid, I kid. Canadian in a Jays card... very clever. ;)
July 1, 2015 at 10:14 PM

Robert said…
I was in Southern Ontario this past weekend. Same as always, beer is still way too expensive...

But I'm a Canadian by birth, so what do I know about baseball?

Brian said…
How about Brett Lawrie for an unmentioned honorable mention?

Stack22 said…
Syracuse dropped the "Sky" from Skychiefs? That's lame. I loved the old logo of the silhouette headdress done like the Toronto BlueJay. Next your going to tell me Oneonta doesn't have a Penn League team anymore.
July 2, 2015 at 10:47 AM

Man said…
Lived outside Detroit for 6 years and enjoyed Canada-Fergie's hometown of Chatham, Ontario is home to a centuries old population of escaped and free blacks from the USA. A truly historical place.
July 2, 2015 at 11:54 AM