Back on the grid .. sort of

July 23, 2015
Well, things are kind of back to normal around NOC. After trying about 21 different ways to get my scanner working, it finally occurred to me that maybe I scan too many images and I just wore the poor thing out.

That's got to be it, right? How many times do regular people use their scanners? Once a week? A couple times a month? Meanwhile, I'm scanning 10 cards a day, on a light night.

So, I went out and bought the cheapest scanner I could find -- because I'm just going to wear it out in a year anyway -- and I'm back to posting with pretty pictures.

Since I've been dealing with evil scanners for the last 48 hours, I don't have a lot to say. But I did manage to buy a pack of cards while I was purchasing a scanner, too. One-stop shopping is still America's greatest invention.

It was the same thing that I bought the last time I bought cards: 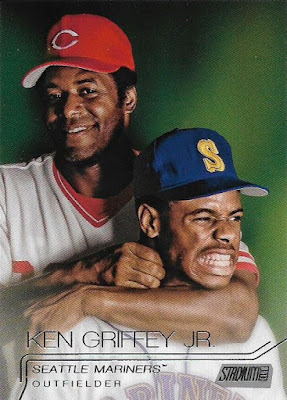 You thought I'd try for something Panini-esque this time?

Ladies and gentlemen, when the best product we're going to see this year is still on store shelves, I buy it.

I liked my Stadium Club rack pack quite a bit, because after the Griffey card showed up, this one followed: 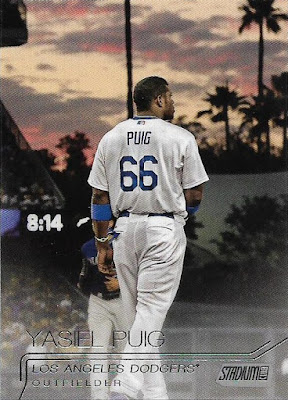 This was the card that I was the saddest about not owning. Until I then owned it. That new scanner is paying off already, in the form of possibly the greatest card issued in 2015. 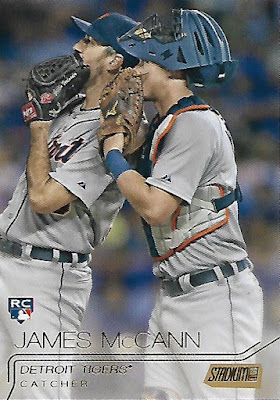 All of these cards were scanned during scanning tryouts, those experiments you do after you first plug the thing in. This gold-foil version of the James McCann card is actually kind of pixelated, but I'm hoping you can't see it. 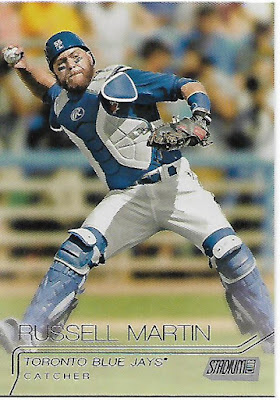 Russell Martin is pixelated, too. But I'll get it figured out. 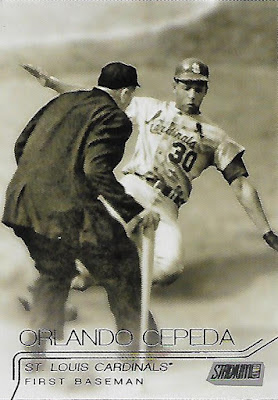 I am thrilled that Stadium Club Orlando Cepeda is a Cardinal, not a Giant. I first knew him as a Cardinal thanks to the 1975 MVP subset that showed Cepeda's 1967 Topps card when he was a Cardinal. What a shattering day when I found out he is closely affiliated with a team even less pleasant than the Cardinals. 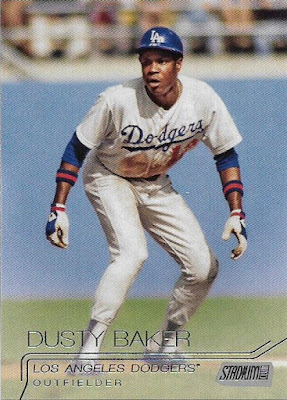 Another card of a player with his proper team -- I'm quite enjoying this Stadium Club. Most relative newbies to the game associate Baker with the Giants, or the Reds, or managing in general. I know him as part of the 30-30-30-30 club for the Dodgers in 1977. Glad Stadium Club remembered. 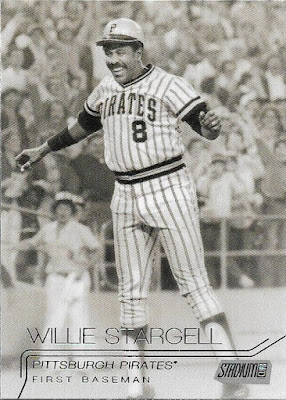 More late '70s greatness, although I wish this photo was in color. It was the '70s you know. Seventies Astros and Pirates should always be in color.

That's all I have time to show, But these cards mean I'm back on the grid. It's fortunate that I had some birthday money handy to resolve things quickly, otherwise I might be talking to someone overseas right now about my scanning issues.

And nobody wants to see a night owl cry.

acrackedbat said…
I thought of you when I first saw the Puig, perfect card for the Night Owl. Pretty sweet McCann too.
July 23, 2015 at 8:40 PM

Tony L. said…
I'm with you on those Pirates and Astros cards from the 70s, but frankly all cards from the 1970s and late 1960s should be in glorious color. It's not like color photography was invented by George Steinbrenner during the 1981 strike.
July 23, 2015 at 9:05 PM

Anonymous said…
That's a good perspective on your scanner. I never thought about it that way. Us card bloggers obviously do use them much more than the average person would. My scanner is also a printer, and I always thought of the scanning as infinite and the printing as obviously not. But maybe you're onto something.
July 24, 2015 at 11:48 AM