I didn't know I wanted this 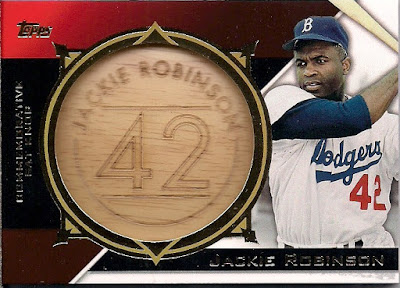 Weekend festivities have really blown a hole in blog posting. I had in mind what I thought was a somewhat creative 4th Of July post slated for yesterday. But I didn't even see the beer and frivolity coming and now you're all going to have to wait a year for that one.

Today I had a different post in mind, but home renovations are preventing me from getting to most of my cards.

So, welcome to option No. 3 of the weekend.

This is a "card" that I received from Zach at Autographed Cards. I believe he pulled it from a Series 2 blaster/value box, and wondered whether I wanted it.

I admit, I waffled and worried over whether I wanted it for far too long. These manu-cards, as you know, are not my speed. It's a little too craft-fair for me, even when they're working in a manly medium like wood. Sometimes I read certain collectors fawning over items like this and I don't get it. It's an imitation bat knob. I barely know what to do with a real bat knob. Why is this considered a thing that anyone would desire?

Think back several years ago when you were collecting, or even collecting as a kid. Did you ever once wish you had a bat knob in your collection? A bat, sure. A bat knob? Never.

But I couldn't turn down the fake bat knob card. It's commemorating Jackie Robinson, and even though the picture on it has been repeated more often than episodes of "How I Met Your Mother" (I'm going to call this "Jackie pose No. 4"), I can't say "no" to Robinson.

Due to the wood piece on the card, it is very thick. It takes 15 cards of 2015 Topps average thickness to match one of these commemorative bat knob cards. That means this is now the thickest card that I own. The previous thickest card measured just 12 average cards: 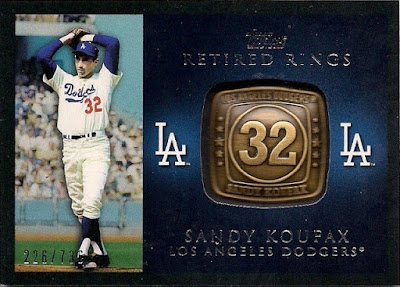 As you know, card thickness can be an issue. Even Zach, in his note said he had no idea what to do with it.

I, as well, will hunt vainly for a top loader or case that can house this item, and it will be months and months before I come across one.

And then the fake bat knob card will join my fake ring card and my fake patch cards in a special place reserved for commemorative fakery in my collection.

But really I should not be as hard on these as I am.

I just didn't know I wanted them.

Zippy Zappy said…
So I guess the question now is, would you ever want one of those (supposedly) authentic 1/1 Jackie Robinson bat-knobs from those high end sets?

On a sidenote, Topps should totally make every manu-knob card in the update set commemorating the Bill Ripken F___ Face card.
July 6, 2015 at 12:17 AM

Brian said…
They could probably get away with doing a blank Ripken Manu-Knob and savvy collectors with a thick Marker could fill in the blank.

Too bad Fleer's gone, that idea could have saved them! (Assuming the Ripken's didn't want to sue...)

Brian said…
I have a box of Twins relics and manu-relics, and I feel like I'm mistreating them in a way by keeping them in there. I like binders for displaying most things, but so far I haven't found a good way to binder-ize the thicker cards. I might try putting a thicker card in an 8 pocket page...
July 6, 2015 at 8:31 AM

Fuji said…
Some manu-relics are cheesy... but this Jackie is pretty sweet. I'm sure these sell for a pretty penny, so I probably won't be adding it to my collection. But if I ever found one for under $5... I'd be all over it.