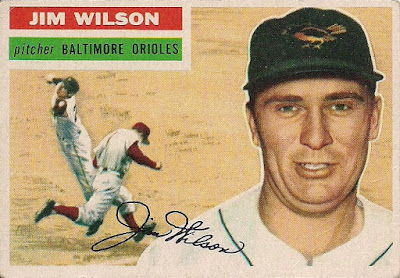 This is my most recent 1956 Topps card. I showed it a few posts ago. It's the 186th card that I have from the set, which means I finally know how many cards I need and also that I should probably get a want list up so people can chase down Mickey Mantle and Ted Williams for me. (This is where I say lol, if I said lol).

Wilson has kind of an interesting story, but I'll get to that in a minute. I wanted to show something else I thought was interesting.

When I was looking at this card, the action shot looked familiar to me. I went through the '56 Topps cards in my one binder and it didn't take me long to find where I had seen it before. 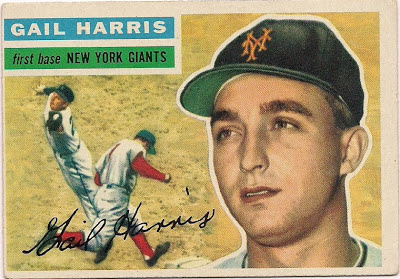 There you go. Pretty much the same play and same player positioning. The only difference is the runner has a green cap instead of a red cap.

In each case, the player being featured on the card is the fielder in this picture. I enjoy how the fielder is supposed to be a pitcher on one card and a first baseman on another. I also enjoy how Topps passes off Orioles and Giants as interchangeable. I've often thought of the two teams' color schemes being similar, although the O's pull it off in a fun-loving, pleasant manner, while the Giants' color scheme is evil and pathetic. Funny how that works.

My guess on what led to the same action picture on each card is that a lot of the '56 action shots are actually painted versions of black-and-white photos. In many cases the photos correspond with the player, but I'm guessing Topps couldn't find action photos of everyone and so they used generic pictures in some cases.

I looked through the rest of my '56 cards to see if I could find any other action picture matches, but this was the only one.

OK, on to Wilson's story: 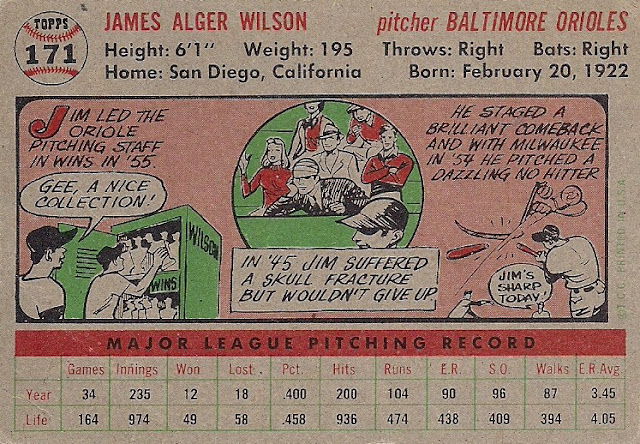 The first panel on the cartoon tells you that Wilson led the fledgling Orioles franchise in wins with 12 in 1955 (it doesn't show the 18 losses that cartoon Jim apparently dumped in the whirlpool). Wilson was the Orioles' all-star representative in 1955.

The second panel shows the low point of Wilson's career. The skull fracture came in Wilson's first year in the majors in 1945. In the second game of a doubleheader against the Tigers, in the 10th inning, Hank Greenberg hit a liner back to the mound that hit Wilson above the right ear, cracking his skull. Wilson was knocked out, then taken off the field on a stretcher and hospitalized.

Wikipedia claims he wouldn't pitch in the majors for another 11 years, but that's not true. He played sporadically until 1951 when he was with the Boston Braves. He won 12 games in 1952, and in 1954 -- the cartoon tells you -- he threw a no-hitter against the Phillies. It was the first no-hitter thrown at Milwaukee's County Stadium.

Wilson later won 15 games, with five shutouts, for the White Sox in 1957. He was the Brewers' general manager in the early 1970s. He also was founder and the first head of the Major League Scouting Bureau.

But he wasn't notable enough in 1956 to get his own action picture.

Eric C. Loy said…
The fielder isn't either of them, apparently, checking the uniform number. Possibly Whitey Lockman.
July 12, 2015 at 11:06 AM