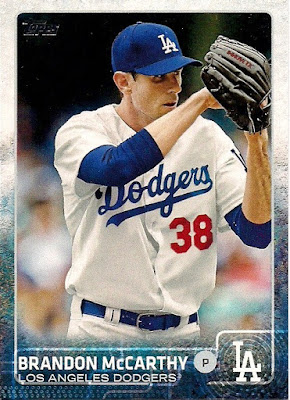 We are sophisticated collectors these days, too perceptive for our own good. Even though photoshopping far surpasses anything airbrushing could ever do, we can still tell when a photo on a card has been photoshopped.

The cap color is too dark or the number is too small or the team script isn't wrinkled enough. We can tell.

But there was a time when we couldn't tell -- or I couldn't tell anyway -- and the retouched photos weren't anywhere near as accurate as what can be done in photoshop. That was in the 1970s and '80s when airbrushing ruled the card world. And we weren't that sophisticated.

Airbrushing had been around on cards at least since the 1950s, probably even before that. The "L.A." on all of the 1958 Topps Dodgers are drawn onto the caps. But even after decades at the craft, airbrushing always looked questionable, as long as you weren't a 9-year-old boy opening packs. By the '70s, airbrushing was the main means for updating a photograph and I was a primary consumer.

I decided to assemble 10 awesomely awful airbrushed Dodgers. The Dodgers don't have as many legendary airbrushed cards as some other teams, like the Yankees, Cardinals, Expos and Cubs, so this was a bit difficult. But I turned up 10 and you can decide for yourself how awful they are: 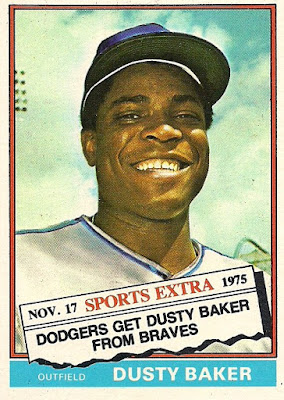 Baker came to the Dodgers in the first blockbuster trade I ever knew. The Dodgers sent Jim Wynn, Lee Lacy, Tom Paciorek and Jerry Royster to the Braves for Baker and Ed Goodson on Nov. 17, 1975. The date is right there on the card.

Airbrushing tells: Someone decided that blue piping along the shoulders and the neckline was a good idea. I don't know why, because the Dodgers haven't done jersey piping since 1971 (thank goodness), and I don't think the Braves did in the mid-1970s either. Weird. 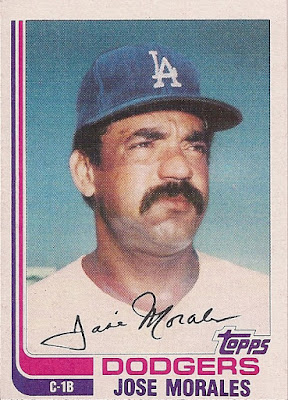 The Dodgers acquired Jose Morales in a trade with the Orioles for third baseman Leo Hernandez on April 28, 1982.

Airbrushing tells: The cap literally looks like a painting, and that interlocking L and A is too large and slightly off-center. 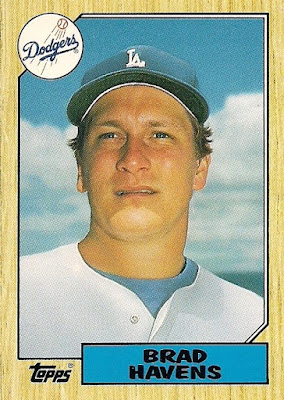 Why go with this card, instead of something more obvious from 1969 or 1972? Well, because it was in 1987 and Topps should have known better by then. I might be the only one horrified by the airbrushings that popped up suddenly between 1985-89, but with Fleer and Donruss as competition, this was not cool.

Havens came to the Dodgers along with John Shelby on May 22, 1987 in a deal with the Orioles for reliever Tom Niedenfuer.

Airbushing tells: The cap color is much too light (as is the undershirt). The drawn-in L.A. looks too thin and tall. 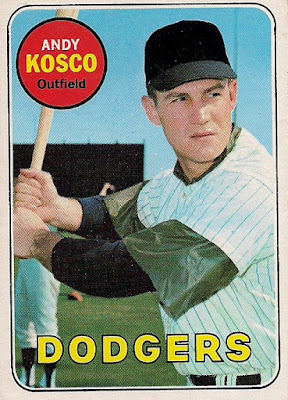 The Dodgers' home run leader of 1969, with a whopping 19, arrived in Los Angeles in a deal with the Yankees for pitcher and future wife-swapper Mike Kekich on Dec. 4, 1968. But by that time, the photo of Kosco as a Yankee had already been selected.

Airbrushing tells: Well, other than the fact that Kosco is wearing PINSTRIPES, there is the blacked out black cap and we all know that the Dodgers don't wear black. (P.S.: the garbage bag under the uniform is not a great look). 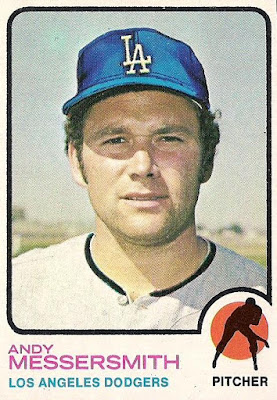 Andy was involved in perhaps the biggest trade of the winter -- that is the beginning of his bio on the back of this card. The Dodgers acquired him from the Angels, along with third baseman Ken McMullen, for Frank Robinson, Bill Singer, Billy Grabarkewitz, Bobby Valentine and Mike Strahler on Nov. 28, 1972. The bio on the back mentions all of this, too, and concludes with "Andy is expected to win big in Los Angeles." The bio was right on all counts.

Airbrushing tells: I don't recall the Dodgers wearing two-tone caps or caps with stitching on the front. And the logo is too tall. 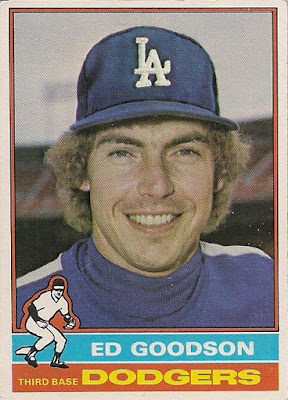 Airbrushing tells: I think if the Dodgers wore denim caps, this is what they would look like. And I can spot that mid-1970s Braves turtleneck look anywhere. 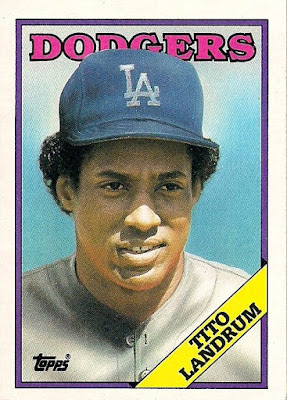 The Dodgers signed Landrum as a free agent on July 10, 1987, far too late for Topps to include an updated photo of him in the set (Donruss, Fleer and Score didn't even try).

Airbrushing tells: Goodness, this stands out more than it would if it was issued in the mid-1970s. The L.A. looks like it was ironed on, although I applaud the work on the brim. The uniform looks far too painted, as well. 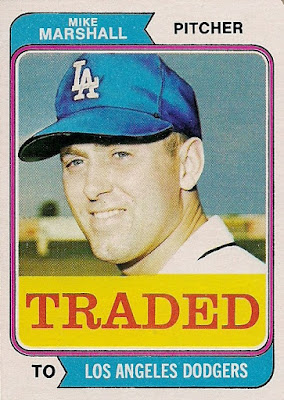 The Dodgers sent former star outfielder Willie Davis to the Expos for reliever Mike Marshall on Dec. 5, 1973. Marshall pitched L.A. all the way to the pennant the following year.

Airbrushing tells: I appreciate the brightness of the blue cap but it is far too bright. Also, this photo had been used on a Topps card before: 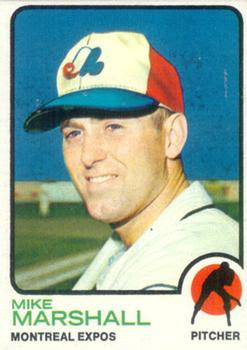 I believe that cap is airbrushed, too. 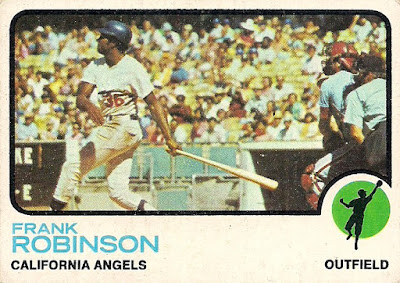 The only example on this list of someone being airbrushed OUT of a uniform rather than IN to a uniform, Robinson went to the Angels in the aforementioned Andy Messersmith deal on Nov. 28, 1972.

Airbrushing tells: Robinson features no team script on his uniform -- well, the blue streak that runs under the Dodgers logo is visible. 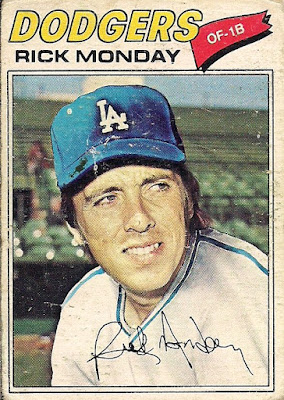 Thank goodness for OPC. This is brutal. Rick Monday came to the Dodgers from the Cubs on Jan. 11, 1977 along with reliever Mike Garman for Bill Buckner, Ivan DeJesus and minor leaguer Jeff Albert. (I've always assumed that Buckner was dealt because his legs wouldn't allow him to play the outfield anymore and they couldn't put him at first with Steve Garvey there. I hope that's what it was anyway because otherwise this trade doesn't make sense to me).

Airbrushing tells: Where to begin? The added piping is clue No. 1. The Dodgers didn't wear that in 1976, 1977 or almost any other year. The cap is that weird multi-blue color and much too square. And the L.A. is too bright and smallish.

As a young collector, I came across the Goodson and Baker cards at the age of 10, Morales when I was 16, and Landrum as a college student (all the others I've acquired since). I always knew something about Goodson was wrong, but I didn't know it was THAT wrong. Morales and Landrum, I was wise enough to know what was going down.

And that's probably why I can pick out the photoshopping on today's cards, too. Even though it's getting better, I have my ways. Lots of practice.

gcrl said…
the frobby is perhaps the most disappointing of them all. i would add the 1978 topps terry forster card to the list, but these are all good (bad) examples.
July 8, 2015 at 8:11 PM

capewood said…
Not the worst air brushed cards I've seen but a nice team collection. Good catch with the Marshal card. That Expos cap looks worse than the Dodgers one. Speaking of reuse of photos, I'm collecting examples from this year and should have a post up soon.
July 8, 2015 at 11:31 PM

AdamE said…
Must be the color blindness cause I never noticed airbrushing unless a logo was missing.
July 9, 2015 at 12:04 AM

Fuji said…
Gotta admit... I'm the absolute worst collector in terms of recognizing today's airbrushing and photoshopping. I never would have guessed that the McCarthy was edited. I guess ignorance is bliss.
July 9, 2015 at 2:25 AM

Stubby said…
Dr. Mike Marshall, I'm sure you know, had disputes with Topps. Initially, he just stopped posing for them, so they used older or action images. Come the late 70s, he challenged their right to do even that based upon a "contract" for $25 signed and paid in 1968 (I believe). Topps felt it had perpetual rights to a player's image and Marshall argued they did not. Marshall prevailed. At least you got a few cards of him. All we Mets fans have is that "Nobody Beats The Wiz" monstrosity.
July 9, 2015 at 7:54 PM